One Small Step for RTS 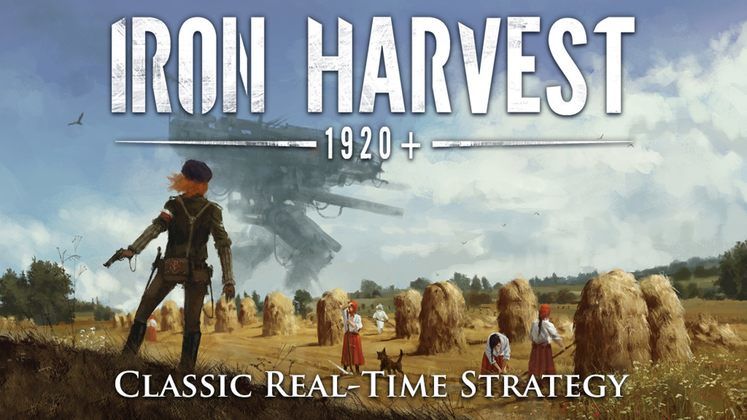 Iron Harvest was successfully kickstarted back in early 2018 and promised “a classic real-time strategy (RTS) game with an epic single-player campaign, multiplayer, and co-op, set in an alternate reality of 1920+”. KING Art Games wanted to bring the amazing world created by the artist Jakub Różalski to life through an RTS that took into account feedback from “thousands of RTS fans”.

They enlisted the help of many of the industry’s finest, including Jakub Różalski, to bring this all to fruition. Now, after many backer betas, a demo on Steam, and most recently, an open multiplayer beta on Steam, it’s finally available to the masses.

So did KING Art Games pull this off?

Of Mechs and Men

For those of you unfamiliar with the world of “1920+”, imagine a world much like our own, where the countries of Saxony, Rusviet, and Polania (and others) are all caught up in an international drama after a Great War. The look and feel of the people’s technology in 1920+ are much like that of our own technology of the 1920s, aside from one huge difference: mechs. 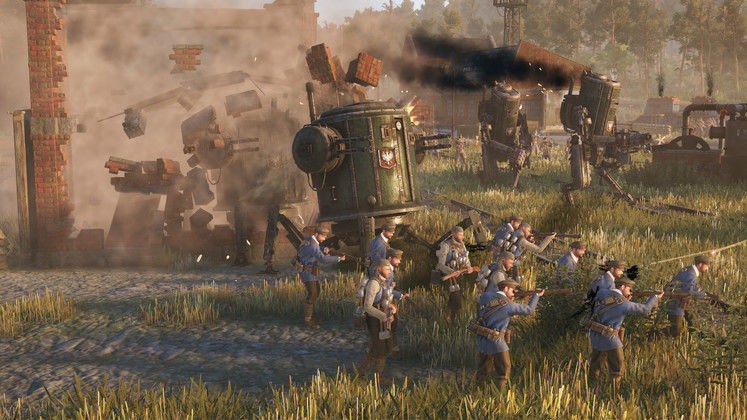 In the world of 1920+, these countries all employ a variety of steampunk-esque mechs that are just as commanding in presence as you’d expect. In many ways, they’re the centerpieces of Iron Harvest. Not only are they the biggest draw aesthetically, but they’re also the focal points of each conflict and can dramatically change the tide of battle.

It’s because of these mechs that Iron Harvest feels unique in its gameplay and in its universe. Each faction in Iron Harvest is given asymmetric strengths that are most obvious in their mechs: the Polania have lightly armored, but quick and hard-hitting mechs, the Saxony have heavily armored, slow-moving mechs with more than enough health to endure, and the Rusviets are best suited for close combat, employing short-ranged weapons, like shotguns, scythes, and flamethrowers.

These mechs are what originally drew me into Iron Harvest and they’re easily the most exciting aspect of the game, especially when the rest of the game plays it pretty safe.

Literally caught between the two superpowers of Saxony and Rusviet, Polania is initially the main focus of the singleplayer campaign. In it, you’ll play as rebels, essentially using small forces in stealthy ways, while employing hit-and-run tactics to your advantage. The story initially revolves around the resistance sniper Anna and her family, but it quickly grows to something much bigger. The campaigns for both Saxony and Rusviet take place in much the same fashion and they all combine to tell a grander story.

It’s here that Iron Harvest both shines and falters. In a lot of ways, the characters are endearing and elicit sympathy or interest in each of the factions, while also bringing a needed human element to the greater conflict. It’s reminiscent of older RTS classics, like Command and Conquer and Starcraft, in that the characters are center stage and the focus on these people leads to a greater understanding of the factions’ motives and causes. 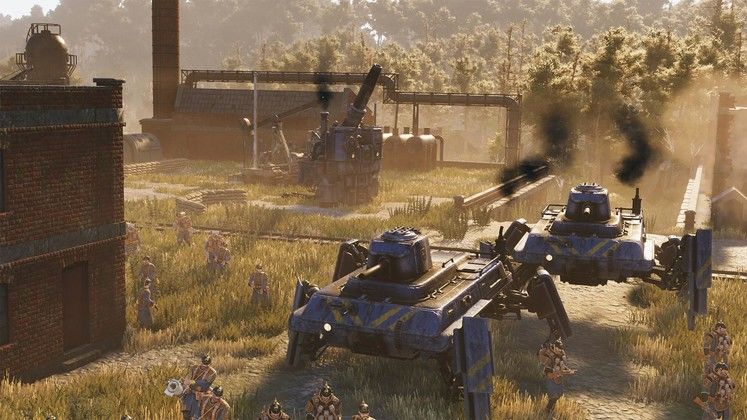 However, the voice acting falters and detracts from the experience. Some of the voice actors make it clear that KING Art was on a budget and reduce the overall quality of the game. Furthermore, the cutscenes are, frankly, a bit ugly, and feel reminiscent of the games produced almost a decade ago. Again, it’s clear that KING Art isn’t a AAA studio.

But looking past the presentation, I found myself still interested in the stories that played out within Iron Harvest’s universe and I couldn’t help but find that the characters and drama held my interest longer than it should have. I just wish more had been invested into the voice acting and cutscene quality, as it could have been so much more.

Let’s be real, though. A lot of RTS fans are most interested in the multiplayer. As I mentioned before, KING Art Games has been holding an open beta for Iron Harvest since the beginning of August. They’ve done a remarkable job of responding to imbalances and gameplay hangups since they started open beta, with hero units being dialed back in strength, starting armies being tweaked to remain fair, and even melee combat being overhauled to be less necessary and overpowered. 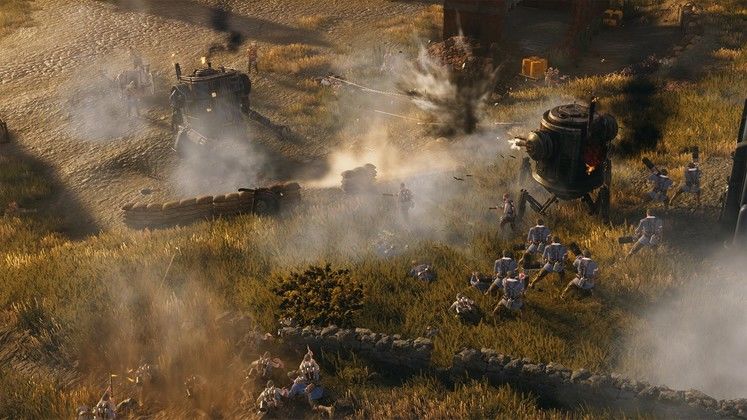 The result is a multiplayer scene that feels both alive and competitive and surprisingly balanced. Though at the time of this writing, there still are issues that need to be addressed, the multiplayer portion of Iron Harvest feels chaotic and fun. It also includes a meta progression element that rewards players for participating, and for winning, but doesn’t tip the scales in an unfair way.

I’ve already seen the vast amount of forum threads comparing Iron Harvest to the Company of Heroes (CoH) series. It makes sense, as the CoH series has a focus on squads of soldiers in a similar setting, they’re both tactics-focused games, and gameplay involves fewer buildings and a smaller focus on base building.

That being said, while the gameplay has a focus on these similar elements, and the comparisons there are fair, Iron Harvest is very much its own thing. When you look at it objectively, you can see that the focus on a single-player campaign and the universe’s characters are the largest departures from the Company of Heroes formula. When looked at as a sum of its parts, Iron Harvest is different enough and interesting enough to feel uniquely its own. 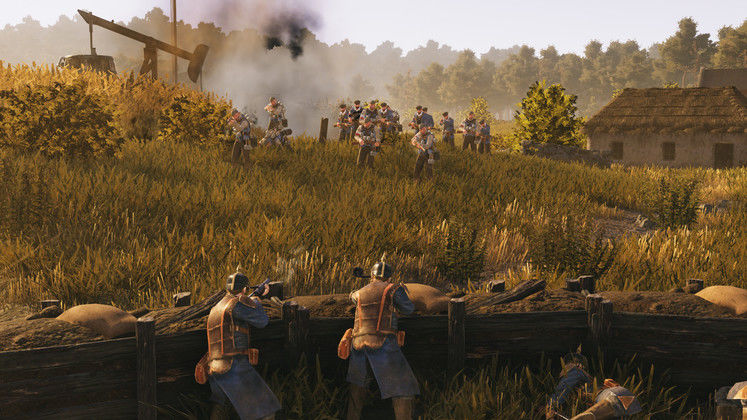 I’m afraid die-hard fans of the CoH series will probably make too many comparisons and bounce off, but if you can shed expectations and play Iron Harvest for what it is, I think you’ll enjoy the game as much as I did.

Where to Buy Iron Harvest

Iron Harvest can be found through KING Arts’ site directly or through Steam. The regular version of the game is $49.99/£46.99 and the Deluxe Edition, which includes the “Iron Harvest Add-On” DLC and the “Mini Campaign” DLC, can be purchased for $69.89/£64.99

I haven’t enjoyed an RTS game this much since Company of Heroes 2. Forget the comparisons and enjoy Iron Harvest for what it is: a squad-focused, narrative-driven, old-school real-time strategy game. If you enjoy your RTS games with a strong single-player element and a multiplayer scene that is seemingly well balanced and competitive, then there’s a lot to like here. I wish the production values were higher in both the cutscenes and the audio and voice-over elements, but if you can look past that as I did, Iron Harvest can be a lot of fun.

My very first mech rolling out of production was a sight to behold. The campaign has some fun twists and great characters. 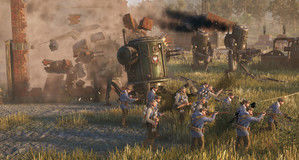