Seriously, where has this adventure game renaissance come from? A few years ago the genre was dead, now there are more point-n-clicks coming out per month than there are first-person-shooters per year. And if there’s one underrated company whose output I’ll continually harp on about it’s WadjetEye, makers of the Blackwell series, Gemini Rue, Technobabylon and last month’s excellent Shardlight. Their habit of making cool, inventive and character-first adventures with believable puzzles in the old-school Adventure Game Studio engine has served them well.

It’s shocking then that Kathy Rain is not a WadjetEye game. Developer Clifftop Games (aka programmer Joel Staaf Hästö) has received some assistance from WadjetEye but they’re not publishing it, meaning we’ve got our first “WadjetEye Imitator”. It could have gone horribly wrong but fortunately Kathy Rain is a compelling game that nails the genre at least as well as Shardlight did last month.

It’s 1995 and the titular Kathy Rain gets a message from her roommate Eileen that her grandfather Joseph has passed away. Kathy has been estranged from her grandparents since she left with her mom, but returns for the funeral and discovers the strange secret of her hometown of Conwell Springs – that her grandfather and many other people have disappeared or been driven mad after wandering in the woods. In order to give her grandmother closure Kathy takes it on herself to investigate, and finds the deeper secret is more terrifying than anything she could imagine. Cue Twilight Zone theme tune. 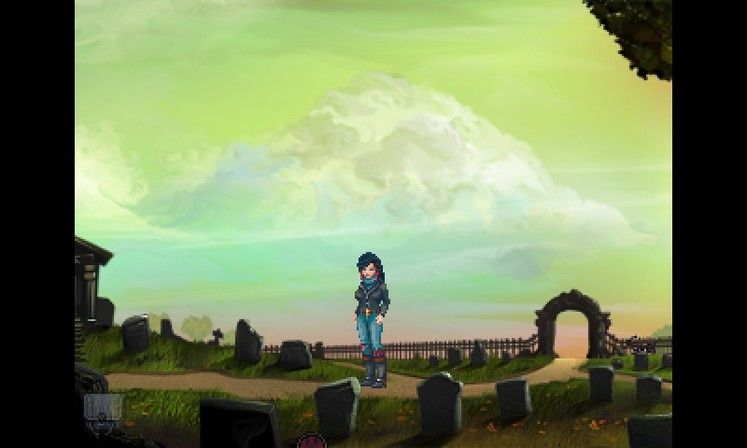 Pictured - not where adventure games are

This being an adventure game the story is actually the meat of the gameplay, and it delivers well. The central mystery about what caused Joseph Rain’s inexplicable illness is compelling, builds slowly and unfolds neatly. It’s certainly entertaining to experience, and once things start getting really weird I was comfortable for it. Nevertheless some people will not like just how completely out there the story gets. It’s all hugely original but in some ways that’s part of the problem. If Clifftop had simply hinted that aliens did it and didn’t show them until the end everyone would be fine, but things arguably get far too nuts far too quickly with no concrete explanation for most things or how they happened with only a handful of people noticing them.

Fortunately the characters and dialogue come across better. In general I like all of them. Kathy’s roommate Eileen is hinted at getting a bigger role in the possible sequel and that’s something I fully support as I particularly loved her. Eileen is perky, irritatingly helpful, doesn’t let her Christianity get in the way of having an open mind, and is a good foil for Kathy to bounce off of. The other characters all feel genuine and real, or at least entertaining such as wannabe actor Goober. It’s Kathy Rain herself though that steals the limelight. She’s nursing a hell of a past that I won’t spoil but is forced to deal with it constantly, but most importantly rarely lets it get to her and she tries her best to not let any of the people she cares about down. She’s also pretty damn cool with her motorbike and ability to barely put up with Eileen’s perkiness. 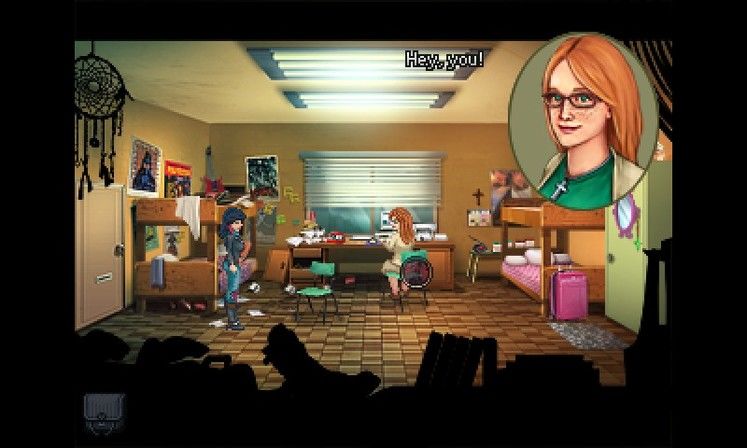 The puzzles all fall into the WadjetEye mold that I personally love, particularly akin to the Blackwell series. They’re a little more sensible than most adventure game puzzles. A lightbulb’s out and Kathy can’t see? Well go to the nearest lamp and just take the bulb from there. Need to find an address? Go to the phonebook and look them up (er, did I mention it’s pre-internet 1995? Well it is). There are some really lovely computer hacking puzzles which all make delicious sense, and several items in Kathy’s inventory get some really novel uses.

The Discworld Noir-style clues notebook is an excellent touch too, and it keeps conversations with characters relevant. There’s a couple of big nutso puzzles too admittedly, especially one involving a safe code that almost thwarted me thanks to the American date layout, but overall I had no problems… which conversely is Kathy Rain’s biggest problem. It took me 6 hours to complete, which is fine but I can’t remember a single time I was stuck for more than a few minutes. This is partially down to the streamlined nature of the game, where useless items and locations disappear so there’s no faffing about, but those hoping for a really challenging adventure should look elsewhere.

Wow. Basically if you’ve got a computer that can run the original Unreal you can run Kathy Rain. They’re pretty accurate, and if you’ve got a tablet or slightly mediocre laptop then congratulations, you’ve got a new game you can play. 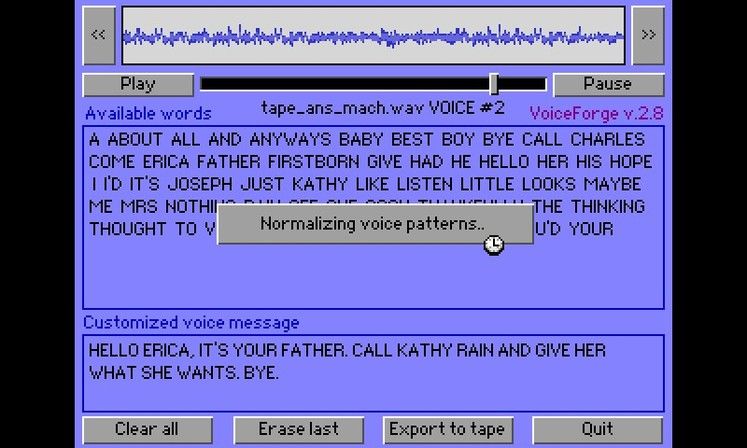 This would be fine.

Of course this accessibility comes at a cost, which in this case is the accursed phrase I thought I’d never hear again in this enlightened age: 320x200. Yes, that’s the resolution Kathy Rain is stuck at. Fortunately it doesn’t make too much difference. On full screen the pixel art is at least as good as anything WadjetEye can do, although it has to be said that the walking animation is even jankier than most AGS engine titles. Otherwise as long as you’re accepting of the 1990s pixel adventure style you’ll be happy with Kathy Rain, and unlike Shardlight I never felt that the low-res art hid crucial items. Plus here it’s appropriate to the time period at least.

The one area that WadjetEye directly helped out with Kathy Rain is the voice acting, and it shows. While sometimes slipping for the most part the acting is excellent, or at least good enough not to take you out of the moment. While there are a lot of simplistic secondary characters and I’m not sure of the rather dull voice of Father Isaac, Kathy and Eileen are particularly great and make up for any shortfall. The music wasn’t spectacular but it was occasionally catchy and blended nicely into the puzzle solving. 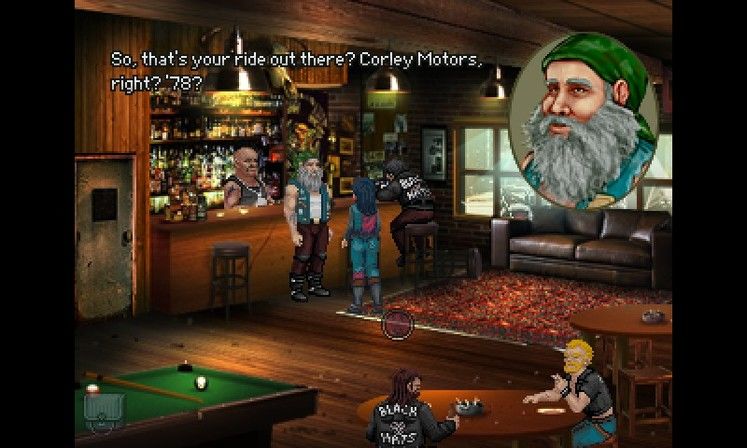 The world design of Kathy Rain is one of its strongest features. Conwell Springs is a believable little town, with a Twin Peaks feel to it and when things start to go insane it actually feels natural. Yes once again this is a town with only a handful of people in it, with no one on the streets except a single useful and story-relevant bum, but I’ll let this pass seeing as this whole thing was primarily made by one guy. Conwell Springs is still interesting to inhabit, and the insanity unleashed within it is neatly original too.

A quick note on systems before I move to the verdict. It’s very much traditional point-n-click adventure with a couple of neat features that are very WadjetEye. Locations you no longer need to visit are greyed out, useless items disappear, and hooray – there’s an interactive item highlighter! The one complaint I have on the technical side is that the inventory is a bit annoying. I mean in what mad world should the arrow to scroll right be placed on the left of the inventory bar? 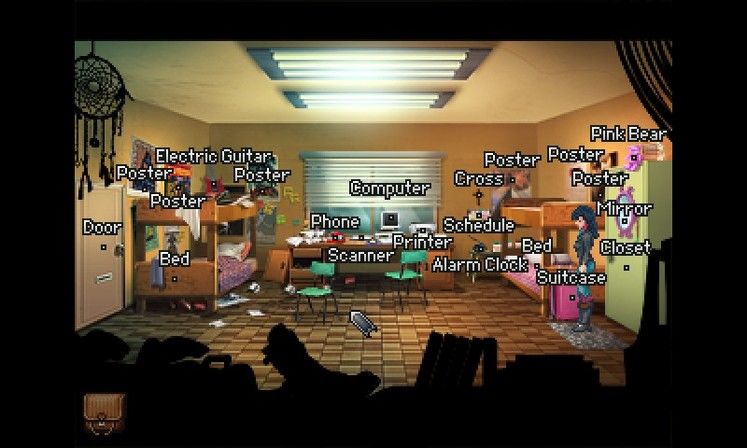 You see this adventure game makers? Have this!

Kathy Rain is a delightful little adventure game to add to the massive pile of fun adventure games released in the last couple of months. The puzzles are believable and interesting with some really clever computer hacking ones in there. The story is compelling and entertaining, and the characters are mostly wonderful – in particular the lead girls, Kathy and Eileen (I love you Eileen!). The pixel art graphics are nice enough, and for the most part the systems work well. That all said for some the story will get too strange too fast, and due to the streamlined nature of the puzzles it’s inevitable that most players will have no trouble solving them. Nevertheless I finished Kathy Rain in 6 hours and I was very happy with all of them, and I’m already eagerly awaiting another adventure from Clifftop. Just make it a joint detective partnership with Kathy and Eileen please?

Hacking my way through a university computer system with the power of a single floppy disk. Happy memories.