The original Mafia is one of the only games I have ever played that genuinely shocked me. Without going into spoilers (for those crazy people who are yet to play it), there's a moment near the end which completely took me by surprise and metaphorically hit me square in the face. In retrospect, it really shouldn't have surprised me that much, given how incredible the story had been up to that point.

I had hoped that Mafia II would continue this trend of gloriously gritty storytelling from the mob underworld, and I was definitely not disappointed. 2K Czech has once again encapsulated the tale of a rise to fame through mob practice, providing an immersive - and sometimes unsettling - journey from small time to made man. Throw in a city bursting with personality, mix it with plenty of enjoyable shoot-outs and car chases, and you've got one of the best gaming releases of 2010.


Set in the 1940s and 50s, the story begins with Vito Scaletta doing his country proud, fighting in World War II. Indeed, from the very beginning Mafia II threatens to be the greatest story you ever played, refusing to stick to a single city like the majority of open-world shooters. Then again, while most people will compare this game to the likes of Grand Theft Auto and Saint's Row, there's so many elements that are completely different.

Take, for example, the mission layout. While GTA gives you multiple people to go to and plenty of side quests to complete, Mafia II takes an entirely different approach, taking players down a linear path and giving the orders, rather than letting you choose where you go next. This sounds like a bad thing, but in fact it's far from it. By forcing you to focus on the story, the game pulls you in and it's hard to leave until the job is done.

This one-track minded angle means that Mafia II doesn't really have missions or jobs - rather, it's telling a story through chapters, and you are following Vito from start to finish. Our man doesn't have time for dallying about the place, helping random people and making extra cash on the side - nor do mission statistics pop up every time you complete a job. 2K Czech wants you to be part of its story, and extra trimmings aren't part of the deal.

It's a risky approach, and one which would not work without a great storyline to back it up. Fortunately, this is where Mafia II shines - Vito's rise to power is brilliant, and you'll be eager to watch every cutscene and see how his power grows. The usual twists and turns feature, from double-crossing allies to jobs going awry.

That's not to say that Mafia II doesn't at least fake being non-linear. Certain chapters feature set pieces which lead you to believe that there's a possibility of different outcomes happening. For example, on one mission you're chasing down a car, and it manages to get away. You're left to tell the boss you messed up. I tried the mission again afterwards, and found that it's in fact impossible to catch up, even though it appears that you may be able to. It's possibly a bit naughty, but I found myself admiring the idea.

As if the story didn't give the game enough personality, Empire Bay is brimming with atmosphere, and looking gorgeous all the while. There's always something going on in your general vicinity - grids steaming at the side of the road; Lights flickering in dusty old apartment blocks; People posting letters, fixing cars, washing windows, even slipping on ice during the winter chapters. Empire Bay is very much alive, and a joy to be a part of.

The soundtrack is also very well implemented, allowing players to flick radio stations while driving and find a whole host of 40s and 50s ditties. The selection of tracks is remarkable and fits the tone of the game perfectly. There's even some old favourites from the original game stashed in there.


While the city is something quite beautiful, it's not all that memorable. Whereas in other open-world titles you'll have certain areas you know your way around after an hour or two, we never really had a connection with Mafia II's world. This may well be a downside of not giving the player much reason to explore and find special challenges - not having the extra activities to partake in means you never really use the whole of the city.

There is a fantastic amount of variety in the jobs you're given. The usual suspects, from shoot-outs to stealth missions to car chases, are combined with clever set pieces that never feel recycled. One particularly memorable job sees you and your partner pretending to be window cleaners and setting off a bomb while halfway down the side of a skyscraper. There's also a couple of references to the original Mafia game thrown in there, although I really don't want to spoil those for you.

Unsurprisingly, you'll find plenty of mobsters trying to impede your progress, so it's a good thing that the shooting sections are great fun. A useful covering system (similar to the one seen in Kane and Lynch 2) allows Vito to hide behind anything, lean out and take his targets. Aiming can take some getting used to, but soon enough you'll be taking out whole hordes of black suits, and making your getaway.

It wouldn't be a Mafia game without the eyes of the law on you, and the police are of course back to be an utter nuisance. Mercifully, they aren't as strict as in the original game - they'll now only stop you for speeding or crashing your car close to them. Thanks to a clever speed limiter system, we managed to only get stopped twice during our entire playthrough, which really isn't that bad at all.

So the checklist is looking good - great story, gorgeous graphics, enjoyable gameplay - but here come the issues. First off, the AI can be quite dumb at times, running off in pointless directions and covering in silly places. During one mission, I was completely surrounded by police. I hid behind a statue in the middle of a park, and after ten seconds, they gave up the search and left. Not exactly realistic.

A horrible lack of save points got my blood boiling too, especially towards the end of the game. Certain chapters let you play for a whole fifteen minutes, and when you die throw you right back to the start again. If ever a game was in need of a few more checkpoints, it's this one.

Some dodgy frame-rate issues reared their heads at certain points, especially during cutscenes. There's nothing worse for breaking immersion than a video getting choppy halfway through. The version we were playing was the Xbox 360 edition - apparently the PS3 version has the same problems, although the PC release is a little better in this department.

Mafia II is exactly the sequel Mafia fans have been waiting all these years for. It’s a brutal tale of underworld family business and killing without a second thought that will have you hooked all the way. You’d do well to grab yourself a copy. Capeesh?

Meeting an old friend during Chapter 14, and simultaneously having your mind blown. 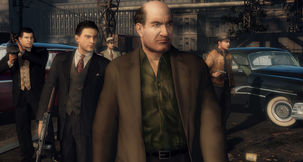