A remastered version of a game barely a year old? How does this work then?

It's easy to see why 4A might want to remaster its ageing (at least in videogame terms) Metro 2033 with a remastered Redux edition, but Metro: Last Light only came out back in 2013. It still looks great and plays well. What could the developer possibly want to add to a game that already has all that snazzy modern polish?

First off, a qualification. If you want a full in-depth review of the core Metro: Last Light experience, I suggest you check out our previous review. The game's been out a year now, and I don't want to retread old ground by repeating what's already been said. Instead I will be looking at what the Redux edition brings to the table, and how much of an improvement it is over the currently available version.


That said, let's refresh the basics. Perhaps not quite capturing the distinctive atmosphere of Metro 2033, Last Light was nevertheless a very competent and well-realised shooter, with several memorable set pieces and a great visual style. It was a worthy sequel, with an engaging story and several smart improvements to 2033's core gameplay. Don't expect the Redux version to radically change this formula. The basic structure remains the same here, with no extra areas, notable new systems or re-jigged levels. The only additional content comes in the form of DLC missions, all of which are already available. So what does it add?

In terms of visuals, not a great deal. Last Light already looked pretty bloody spiffing, so while there might be graphical enhancements they're difficult to really pick out. Performance does seem slightly improved - with tessellation off I managed a far more steady framerate in Last Light Redux than I did in the original release – but ultimately the difference here is negligible, at least compared to the major overhaul found in Metro 2033 Redux. More interesting are the changes made to the game's various difficulty modes.

Ranger Mode, the stripped down, HUD-free way to play Last Light, was previously rendered incredibly frustrating by the lack of a method of checking your ammunition levels - something I'm pretty sure most badass metro Rangers would do before wandering into a mutant spider lair. That's been fixed now, which automatically makes Ranger Mode a great deal more immersive - even if a cynical person might suggest that this simple mechanic would have been pretty easy to add in a patch, rather than making it exclusive to the Redux version.


A new Survival difficulty mode allows you to further customise your experience; Survival sticks closer to the original Metro 2033's slower-paced, more brutal and unforgiving nature, with ammo much rarer, and guns slower to reload and swap. The simple act of reloading becomes a huge tactical decision, doubly so given your mutant enemies' love for jumping straight at your face. Paltry supplies mean scavenging for goods is essential, and not ending each level with a colossal stock of spare ammunition really helps sell the survival concept. It's a nice change for those who thought Last Light veered a little too far into mainstream shooter territory. You can play Ranger mode alongside any other game mode, including Survival, if you really want to challenge yourself.

Buying Last Light Redux will also net you all the post-release content 4A has released. It's a mixed bunch, all round, with some excellent missions (the measured survival horror of the Kshatriya mission is a highlight) mixed in with uninvolved filler (the arena mode Tower Pack relies far too heavily on Metro's hit and miss combat) that retreads old ground. There's nothing in the additional DLC that demands you play it, but if you desperately want to return to Metro's world there's enough to keep you entertained for a few extra hours.


So now we come to the difficult part. Who is this remastered version really for? Metro Last Light is a great game, and if you've never played it before this Redux version is probably the way to do so. It packs in all the additional content 4A has released, along with some welcome new features and game modes, all for a cheaper price than the current retail version. If you already own the game, however, this is far from the radical visual and gameplay revision that Metro 2033 has received. Unless you want the additional DLC (buying Last Light Redux with the 50% discount those that own the original game receive works out cheaper than splashing out for all the extra content), and honestly I'm not sure that's worth your time, then I don't feel you need to pick this up.

I realise all these caveats render a scored review somewhat meaningless, so the takeaway message is this; if you've never played Last Light, you should – it's an excellent game, and you should opt for this version. If you've already played it, however, you don't need to upgrade.

I realise all these caveats render a scored review somewhat meaningless, so the takeaway message is this; if you’ve never played Last Light, you should – it’s an excellent game, and you should opt for this version. If you’ve already played it, however, you don’t need to upgrade.

That spider nest level never fails to raise the hairs on my neck, and it’s even more unnerving when played in the much-improved Ranger Mode. 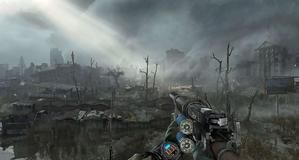