A Bounty You Can Safely Skip 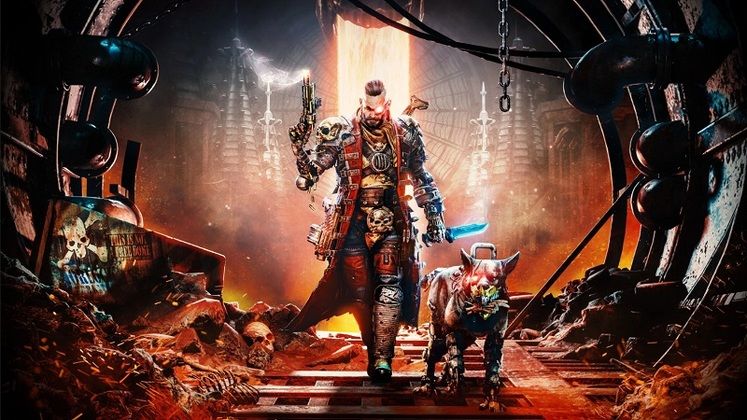 Necromunda: Hired Gun begins rather unceremoniously. You select your character’s face, from about 15 male and female presets, after which you’re thrust straight into your first job, investigating a murder. Although you’re at the center of the action, there’s a strong sense that you happen to be just another gunslinger in an uncaring Hive City. With just your arsenal and trusty cyber-mastiff by your side, you quickly get embroiled in conflicts much bigger than yourself. But unlike its protagonist, which comes equipped with cool cybernetic augments and is capable of wiping the floor with the opposition, Necromunda: Hired Gun fails to stand out, remaining a thoroughly average first-person shooter.

The thirteen linear missions of its campaign see you exploring different parts of the Imperium’s sprawling industrial hub. You’ll fight on top of moving trains, scale massive buildings using your augmented legs and grappling hook, traverse acid lakes, and follow pipes to forgotten sections of its underbelly. All the pieces to recreate one of Warhammer’s most iconic locations are there, but consistently muddy textures suffocate any attempts at creating a tangible atmosphere, while unrefined character models and facial animations constantly remind you that you’re playing a budget game. 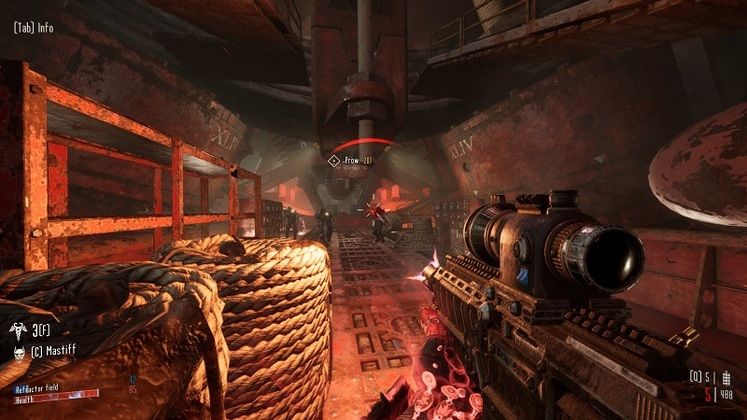 You’ll spend the majority of your time filling foes with bullets coming out of a variety of 40K weapons, including bolters, plasma guns, heavy stubbers, and sniper rifles. Necromunda: Hired Gun’s combat is definitely fast-paced and zipping around the battlefield using the aforementioned grappling hook does grant a certain sense of freedom. Some of the weapons sound punchy enough but, while blood and guts do fly through the air as you land hits, there’s a distinct lack of feedback when taking down enemies, which manages to make these kills feel eerily unsatisfying. There’s also no rhythm or proper pacing to most encounters. Normal difficulty tends to be quite schizophrenic, alternating between portions of levels that pose no real challenge and others in which enemies swarm you from out of nowhere, melting your HP bar.

The Orlocks’ dark armor and preference for ranged weapons contrast the hammer-wielding warriors and Ogryns of the Goliath, while the all-female Escher gang flings fireballs and electricity your way in between volleys of bullets and plasma rounds. But this perceived variety rarely challenges you to switch up your tactics. Foes like shielded enemies, Ambots that burrow underground and emerge in different locations, or Ogryns that leap across great distances do stand out initially but, in the long run, only prolong battles, rather than make them interesting. The janky animations that permeate the entire game also remove any threat from the opposition. On top of that, the AI has a tendency to get stuck in terrain and/or simply forget you’re there, even when you’re in clear view and shooting them in the face. 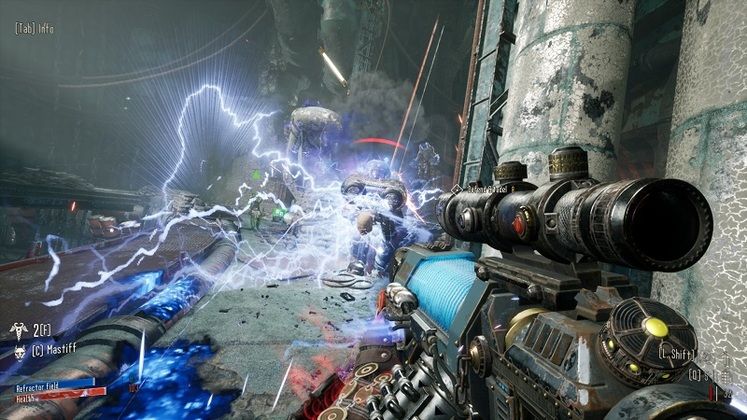 Necromunda: Hired Gun also tries to borrow a page from the Doom 2016 book, letting you replenish health through melee takedowns. Unfortunately, these are either too slow and look goofy or too fast and confusing to watch. When repeatedly stabbing enemies, for example, you’ll often see blood splurging from their neck, despite your knife connecting with their torso. Instead of being a glorious culmination of your violent abilities, they’re just a messy mechanic that, nonetheless, becomes pretty much a cheat when you risk being overwhelmed. The grappling hook lets you remove shields and get close to your assailants – although takedowns can often invalidate them anyway –, at which point, you can clear entire packs of enemies by chaining takedowns.

Although you’re outnumbered, these ruthless gang members will patiently wait for you to slaughter their friends one a time. Those who do keep attacking can’t hurt you, since you’re immune to damage during the takedown animation, which also heals you. During one boss fight, hammer-wielding gang members would launch us in the air and through walls while our character was busy stabbing their pals. Not only did this not break the animation – which kept going, although our target remained on the ground – but was also one of the few memorable moments in Necromunda: Hired Gun. 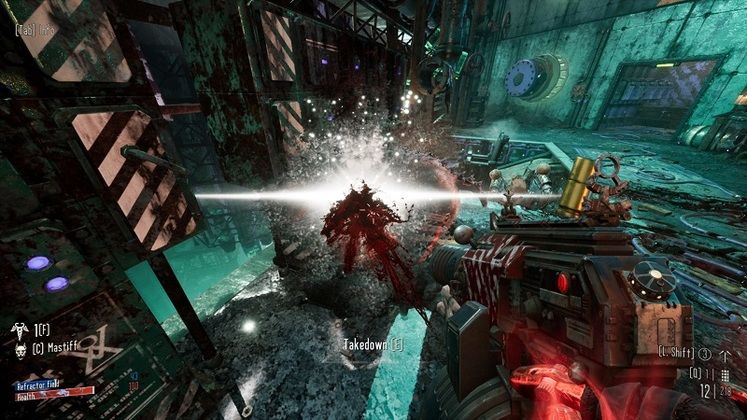 As you upgrade your augments, you unlock certain abilities that sound good on paper but are a mixed bag in practice. The passive bonuses to health and critical chance feel rather inconsequential. Others let you slow down time or aim for the head for a short period, with some equally underwhelming results. The one we made most use of enabled our first takedown attack to instantly disable shields, which ended up being a little too potent, trivializing the more difficult enemies. Another ability allowed us to slap things really hard while up close, dealing a good amount of damage to Ambots and Ogryns immune to instant takedowns. There’s also an ability that steadies your aim while wall-running but there’s never really a reason to wall-run let alone shoot while doing so, due to how efficiently you can move around using the grappling hook. The ones that don’t lose their appeal are also hurt by the unimpressive animations and underwhelming sound design that plagues Necromunda: Hired Gun.

Your Cyber-mastiff starts off as a cooldown-based ability, materializing out of thin air when called, half of the time in plain view. Its animations are no strangers to jank and it often has issues navigating terrain. Spawn it on a higher level and, if there’s no obvious way down, it’ll just hang out there doing nothing, afraid of the non-existent fall damage. The worst aspect about it is that after killing its first enemy, you often have to manually point it towards the next target, at least before upgrading its detection range. This stops you from shooting because it plays an animation in which you squeeze a squeaky toy. The mastiff then attacks the enemy (sometimes teleporting through solid terrain to it) before disappearing into thin air. 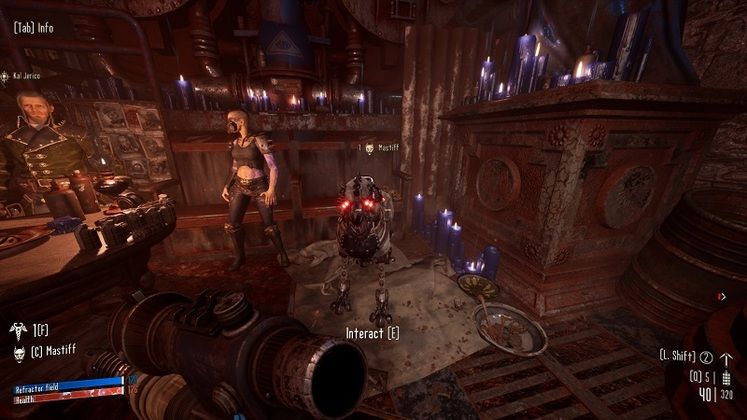 Giving the doggo sharp metal jaws and enhancing its detection range does turn it into a decent combatant – although, if you’re unfamiliar with the setting, it may be disturbing to see a perfectly fine mastiff have its flesh removed for increased combat efficiency – but it never feels like an actual loyal companion. Even after you purchase upgrades that reduce its cooldown time and let it stick around for longer, it remains yet another ability that you can easily forget about, aside from those instances when enemies swarm you in open areas.

During each mission, you can also scout out treasure chests that act as a source of higher-rarity guns and armor – part of a basic loot system stretching across a few tiers – but there’s rarely a reason to go out looking for them. Pathfinding can sometimes give you trouble, when the road forward goes through small vents or pathways that aren’t too easy to observe thanks, in part, to the game’s ugly textures and occasionally confusing level design. You can also do just fine with the weapons you receive by simply completing missions, which you can then upgrade with stuff like scopes, muzzles, and firing mechanisms, for a slightly more specialized playstyle. 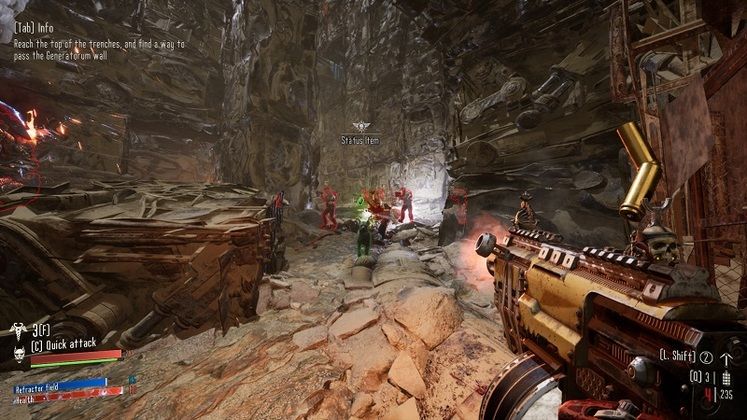 Side missions are an additional source of money and gear that blatantly reuse levels from the campaign, tasking you with staying near a flag until a bar fills up, eliminating certain opponents, or pressing “E” when near piles of meat or vents. There’s nothing remotely interesting about them and it’s hard to justify playing too many, unless you’re super adamant about fully upgrading your character. As you complete them, you gain reputation with factions on a surprisingly long list, but all this seemed to do is fill a bar on the mission terminal’s screen. Side missions suddenly end when you complete their objectives, which is welcome due to how boring they are, but simultaneously feels rushed. Filling two bar segments for one faction didn’t really reward anything, at which point we traded pursuing them for holding onto our sole remaining shred of sanity.

Necromunda: Hired Gun’s thin central plot only acts as an excuse to get you to murder people, its notable characters being thoroughly unremarkable, much like the hub area of Martyr’s End. In it, you can upgrade cybernetics for both yourself and the cyber-mastiff, buy weapons, improve those in your inventory, and test them out in an enclosed arena. You can also purchase consumables from the mission terminals before heading out. While medkits and Stimms will save your life, you never feel quite like a proper bounty hunter preparing for different tasks with odds clearly stacked against you.

Necromunda: Hired Gun checks all the boxes that should make a single-player first-person shooter tick, but its flawed execution and an ugly Warhammer 40K paint job give you few reasons to stick with it until the end. It’s functional and has a grappling hook that’s alright to use. But its tedious, unsatisfying combat, janky animations, and AI that’s prone to mess up all test your patience without offering any tangible reward. It misses out on making you feel like a bounty hunter – badass or otherwise – and all you’re left with, in case you do play through its campaign, is a sense that you could have spent that time playing something better.

Using the grapple hook for the first time, maybe. 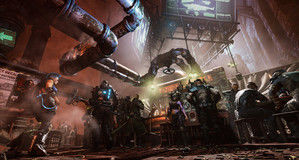