Addictive and brutal oldschool platforming with a psycho circus twist

In 1998, KISS released the album Psycho Circus. While the band’s album eventually certified gold, the lasting image left with me was the true horror one might find at a circus. Face it; clowns can be down right creepy. Now imagine a bunch of creepy clowns and other circus freaks all up to no good. The mere idea conjures up a nightmarish scenario in which things that are supposed to be fun for the whole family turn out to horrify the whole family. And this, the sinister circus arena, is the unpleasant backdrop behind indie developer Self Made Miracle’s Penarium.

Penarium sports the seemingly standard indie game criteria of 2D graphics, a sense of humor, and a chubby antagonist more true to life than the super heroes in most games. The game actually plays more like the original Mario Brothers, allowing up to two players in local co-op mode. But jumping around in sprite-based glory with a friend on fixed platforms is where that comparison ends. As mentioned, this is a psycho circus, not a fun place to hang out. So rather than enjoying the rides and games that come with the usual circus, the player must perform for the sadistic crowd as guided by the circus director. 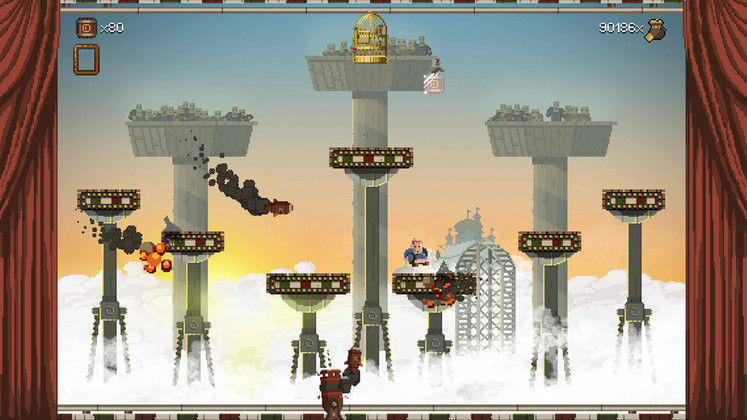 The visuals are both nostalgic and campy

Penarium begins with the protagonist, Willy, working with his father on their farm. Willy works long days and dreams of doing something more, having an adventure. When a circus caravan passes by, he cannot resist the offer to experience the circus. Sadly, Willy discovers that this is a sadistic extravaganza rather than an exciting break from farm work, as he is placed in the role of performer.

The director serves to ease Willy into the challenges that await by explaining how the circus works. Essentially, each level has Willy collecting items such as barrels, balloons, or even ingredients for the director’s body lotion. While Willy collects items, dangerous traps like machine guns, ice guns, saw blades, and even a rising flood unlock. The traps are added as Willy collects more and more, raising the game’s difficulty as the levels progress. Additionally, the number of items collected in each level is increased to ramp up the difficulty. Beginning with collecting five barrels, Willy’s task starts out simple, but before long the challenges and number of items to collect makes each level a great challenge.

There is a balance in games like this where the challenge drives the motivation of the player to come back for more. Make the game too difficult and players quit in frustration. Make the difficulty viable and players continue out of a desire to succeed. The true indicator of whether or not a game hits the sweet spot between overly difficult and just challenging enough is whether or not the game is fun. And it is here that Penarium succeeds more often than fails. While the first few levels are pretty manageable, the game quickly ramps up the challenge. It was not uncommon that a level might take a dozen attempts to complete. And while the game is fun, it gets really hard to enjoy seeing Willy chopped up by a saw blade just as the final item is about to be collected. The good news is that even at its most difficult setting, the failures come as a result of the player’s skill rather than an arbitrary game mechanic. There was never a time it felt like something random happened that could not have been overcome by faster reflexes or better decision-making. 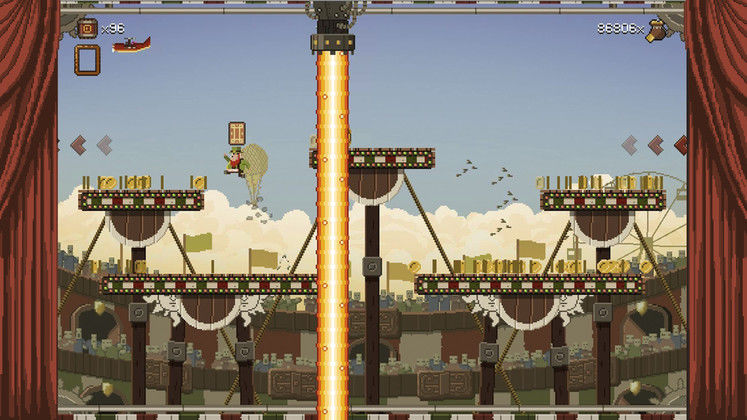 Your fingers will get the workout chubby Willy truly needs

Multiplayer comes in the form of versus and co-op. Challenge your friends or work with them to defeat the sadistic circus together. While these modes are fun, they do add a level of chaotic craziness that takes things even further over the top. Trying to collect and press buttons under the constant threat of death is not made easier when your friend accidentally lands on your head, briefly incapacitating you. But the multiplayer, whether with or against your friends, does ratchet up the fun along with the difficulty. The desire to win as a team can make the gameplay more accessible than simply playing alone where frustration can drive one to simply log out.

Self Made Miracle really put some love into the visuals despite their rudimentary nature. Penarium looks terrific and is presented in the perfect 8-bit style of original 2D platforms like Donkey Kong and Burger Time. Attention to detail is quite high and noticeable in everything from the bounce of Willy’s chubby belly, to the blood explosion punctuating each death. The overland map has details that will never matter in terms of gameplay but showcase how much the dev cares about the game’s world. One drawback of the graphics can be how busy things get when chaos is all around you, particularly in multiplayer mode. Ultimately, however, visuals deliver and follow in the legacy of the many platform games that have come before. 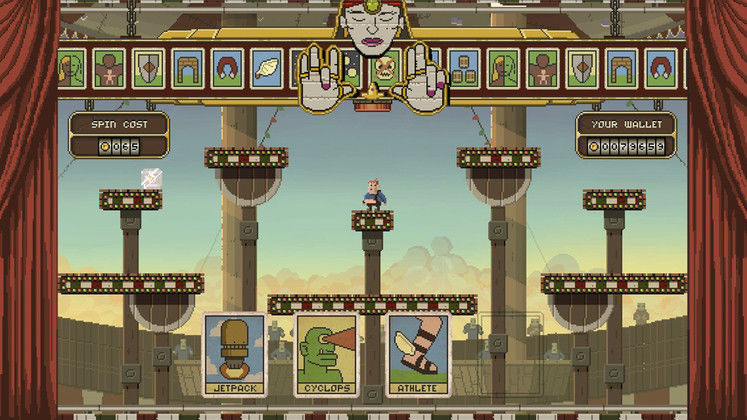 Learn to laugh at Willy's demise, you'll be experiencing it often

Sound is also a highlight of Penarium. From the circus-inspired introduction and load screen to the frantic action beats in each level, the audio is top quality. The voice-over for the circus director is perfect for that character and even the cheering of the bloodthirsty crowd works to create an atmosphere of a psychotic circus throughout. Overall, the audio is truly one the game’s greatest highlights.

While Penarium does have some excellent elements, it is not without flaws. The keyboard controls are effective but stray behind a good controller. With the platforming gameplay this is probably to be expected, but keyboard bound PC gamers will need to brush up on their spacebar or up-arrow skills if they truly want to overcome the death circus. Additionally, why not offer players the option for online multiplayer? The local co-op and vs modes provide a great experience and the ability to match up through Steam would be a welcome addition. A final negative for some will be the game’s difficulty. While never overly punishing, Penarium’s levels can feel brutal if things go wrong. Even when it’s fun, a frustrating poorly timed leap or dodge at the last collectible during a level can make even the most patient player rage-quit. But again, the fault does typically lie in the gamer’s skills rather than random bad luck.

A trip to the psycho circus is far more enjoyable than it might first appear. Penarium is an excellent game that delivers quality fun with or without friends. The graphics and story are a perfect platform to deliver this unique platformer to the masses. The pacing works well to move players through the game’s grinding levels to the beat of a perfect soundtrack. Players who enjoy this type of game will find gold here, and players even remotely interested should dive in without fear. 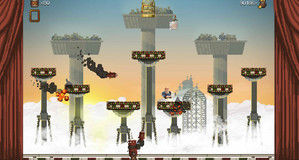