Pride cometh before the fall

Have you ever played a game that you really just don't understand, and yet you go through the motions and everything seems fine, and you're not sure why? That's what it can be like playing Pride of Nations, the latest niche strategy game from Paradox France, formerly AGEOD studios. It's not that it's bad game, or even a badly made game (unless you think mind-numbing detail is a major design flaw), it's just that it's pretty intense.

Fair play to them though - through American Civil War, Rise of Prussia and now Pride of Nations, the team haven't compromised on what they want to do. In an industry where many developers can be accused of "dumbing down" or making their products more 'mainstream', kudos goes to these guys for not going down that route. Pride of Nations is un-relenting, it's un-assuming, and it's definitely not for amateurs.

Pride of Nations is set during the high-years of colonial imperialism, between the years 1850 and 1920, so it brings it in line (at least in terms of theme) with one of Paradox's other titles, Victoria II which was released last year. Unlike that more open game though, you're restricted to just eight of the major power of the day: UK, USA, Germany (Prussia), France, Japan, Russia, Austria-Hungary and Italy. Each country has its own list of key objectives and a different 'style' of playing, and your job is to basically see them through the years to victory through the acquisition of prestige points.

There are several different 'modes' to the game, which filter through subtly different interface options and themes. The economics mode governs the placement of structures, which include everything from railroads, to farms, to factories and forts. The colonial mode is the games way of dealing with one of the more popular hobbies of the time. Land not already claimed by a sovereign nation is open to 'influence' from greater powers, and this is achieved through special missions that you can assign to provinces. Depending on how much influence you have, these can range from simple expeditions, to treaties with the local chieftains and missionary out-posts.

The military tab governs your military assets by making armies and navies more prominent on the map, and by entering the sub-mode, allows you to build more troops or ships (in the Economics tab, you enter the sub mode to build stuff as well). The military system on its own is very in-depth, with realistic supply systems, and separate units devoted solely to supply. Troops are divided into corps, brigades, companies etc... and there's a range of support units as well from engineers to signal corps. Finally, there is the 'decisions' mode, which doesn't really come into play that often and pretty much does what it says on the tin.

As you'll have noticed, we've given up a lot of space just to the details about the game - that's how complex it is. There's not a lot to it in terms of different modes or interfaces - just the grand map, with the different 'modes' and then pages of information mapped to the F1 - 9 keys. It's in those seemingly minor pages where the real depth comes in. Forces disposition, research, social make-up, goods and resources tabs... the diplomatic system - which is the most complex we've seen in a game yet. It's good thing they are hidden away in the ancillary areas. If all the information was presented to the player up front, it would probably be too much all at once.

In terms of how it plays out though, a game this deep is really dependant on you being able to engage, but more importantly understand just what the hell is going on. The game is turn based, and each turn last 15 days of game time. Depending on what you're waiting for/doing, this could mean you skipping several turns in one go, or taking each turn as they come and making tweaks where needed. With a game that spans nearly 60 years though, that means there's going to be a lot of turns. We wouldn't go as far to say that it's boring - although the combat engine, for example, is plain and based entirely on stats and other facotrs - but it's hard to enjoy something you don't get.

It's good that this game isn't really focused on 'winning' unlike many other strategy games - sure, there is the overall goal to get prestige points (and the first nation to a certain number 'wins' effectively), but how you get these prestige points is entirely up to you. You're not forced to do anything before you're ready, and, given time, you will probably get better at the game. Make no mistake though, this is a very time-heavy title. Expect to pour hours and hours spread across several days before anything truly interesting happens.

In addition to the grand campaign, there are several combat-focused scenarios to appease the pure wargamers amongst you. These usually have you playing just one side, and play out over a specific area of the map and have slightly more scripting than the main game. There's a few of these available at launch, and there'll be more released as DLC as time goes on. There's also the multiplayer mode, which has been improved to make the whole process more efficient. Much like the grand campaign itself, these scenarios will have limited replay value, especially if you win first time.


If Pride of Nations is guilty of anything, it's simply guilty of being unimaginative. But what it lacks in imagination it makes up in historical fidelity and sheer depth. This game is only going to appeal to a very select group of people, and no one else - but by all means, give it a try if you want. My advice is to play something like Victoria II first, and then move up from there. It would be hard to call this game 'fun', but we can confidently say this game is well made, good at what it does, and has a clear identity. So many games these days lack even that.

You can purchase and download Pride of Nations from GameWatcher.com now.

That time I think I won a battle, that felt good. 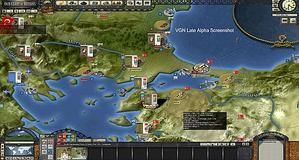