Set in the aftermath following world war 3, the surviving human race emerges from fallout shelters once the radiation levels have become tolerable. Each shelter eventually became a city state and factions arose, all vying for power. The factions now fight over the earths most valuable resource, radioactive shale gas, which will determine what faction will reconquer the earth.

Visually, Reconquest oozes that retro RTS command and conquer look with nice unit design and a barren wasteland to fight in. Aesthetically it could be said that Reconquest combines C&C, Dune and throws in a touch of Mad Max to create an art style that will give old school RTS fans that nostalgia feel. 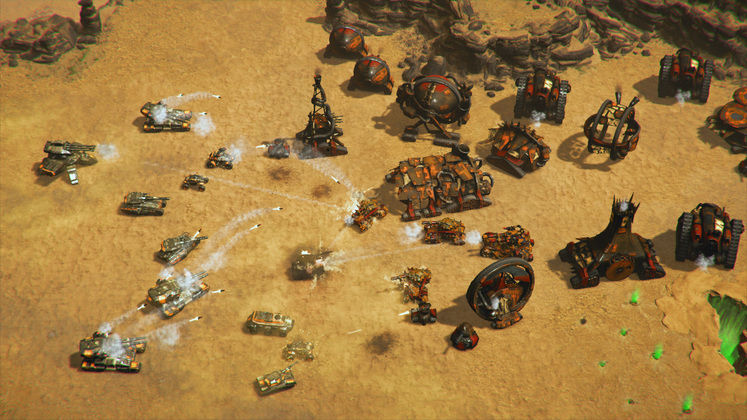 Reconquest’s major achievement is capturing the essence of what Command and Conquer was all about. Yes, it doesn’t get everything right and contains some design oversights, but for the most part it’s a solid love letter to the RTS’ of a bygone time.

Many RTS fans will get a kick out of Reconquest, flaws and all. The developers have remained hands on since launch and have patched out the majority of complaints that initial players had with the game. Which leads me to hope that some of the infantry balancing will one day be fixed too.

A solid indie real time strategy that is held back by a few flaws but retains a sense of what it wanted to be. This indie command and conquer could be a strong starting place for Stormcube to expand into the genre in the future.