The tower defence genre has been moving in an increasingly action-focused direction as of late. The likes of Toy Soldiers, Sanctum and Trenched have kept the core principals of the strategy subgenre intact but have also let players experience the proceedings at ground level.

Rock of Ages takes this one step further, keeping the third person action but in the form of Super Monkey Ball-esque ball rolling and couching it in a delightfully off-kilter version of ancient history.


A standard Rock of Ages match (known simply as War) is a one on one battle with each participant given a castle to defend and a giant boulder to assault the enemy’s stronghold. The overall goal is to smash down your enemy’s gates before they can do the same to yours.

The action takes place in real-time divided between two distinct phases of play. Both sides start in the set up phase in which each has to populate their side of the map with defensive obstacles and hindrances. These include explosives, catapults, wind generators and good old fashioned towers.

The next phase begins once construction of your boulder is completed. Taking direct control of it you have to successfully guide it through your opponent’s half of the map in order to deal damage to his or her castle gate at the very end of the course. How much health you knock off is dependent on how well you avoided damaging your rock during the course and on how much momentum you can build up on the final stretch.

After your boulder makes contact with the enemy’s gate its back to the set up phase (with a new influx of spending money) until your next rock is ready to roll. This cycle continues indefinitely until one player wears down the opponent’s gate enough to smash through it and claim victory.

Game play might sound complicated but it’s really easy to grasp once you see it in action. The outcome of each match hinges on how well you can optimise your half of the symmetrical map to delay and damage your opponent’s boulder and how well you can navigate through their own obstacle-filled territory.


A unique concept means nothing if not well executed. Fortunately, Rock of Ages is no slouch in the game play department. Boulder control is really satisfying, feeling just loose enough that it requires an appropriately realistic amount of finesse. The game expertly straddles the line between skill and strategy, favouring neither one over the other and encouraging the player to get a sufficient handle on both.

The game’s premise is explained to humorous effect in the Story campaign. You play as Sisyphus, the king from Greek mythology condemned to roll the same boulder up a hill over and over again.

Rock of Ages’ version of the character decides to man the hell up and break free of this cycle, defeating his overseer Cronus with the very boulder used for his punishment and escapes Hades. He then goes on a journey across time and Europe battling various historical figures from ancient Greece all the way up through to 19th century Spain. Why? Just… because.

The campaign will take a handful of hours to beat but there’s some replay value to be had for achievement chasers in the form of finding hidden keys scattered around its stages. War can also be played against a human opponent either in split screen or online, which adds a great deal more potential replayability.

There a couple of other modes on offer but neither are as meaty as War. Time Trial throws all the tower defence elements aside and for all intents and purposes completely becomes Super Monkey Ball, asking you to simply roll your boulder to the other end of the course as fast as you can.

Skeeboulder is a bit more creative, essentially recreating skee ball in the game’s engine. This only truly comes into its own in multiplayer though where each participant’s boulders are in play at once, encouraging heated competitive play.


Rock of Ages’ presentation is definitely one of its high points. All of the character art and cutscenes are comprised of barely animated cut-outs of classical art highly reminiscent of Monty Python. But the historically themed stages also look fantastic and surprisingly authentic despite the game’s surreal presentation.

Rock of Ages is one of those games that is difficult to encapsulate in a written form. With its genre-fusing game play and cheeky yet surreal take on ancient history it really is one of a kind. While content might be a little thin outside of the main mode and story campaign, the game is still more than worth the 800 Microsoft Point asking price.

Successfully pulling off a daring boulder jump that provides a crucial time-saving shortcut. 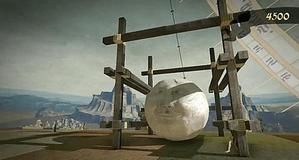