The PC RPG comes to consoles. Is nothing Sacred?

Released for PC in November of last year, Sacred 2: Fallen Angel gave RPG fans a dose of Diablo-esque dungeon crawling and open-world action, all set in the bug-riddled world of Ancaria. Developer Ascaron has now tailored the game for the console crowd, adapting the interface and ironing out a few of the issues that plagued the PC release. But will console gamers be wooed by the fantasy hacker and slasher with all the hours of grinding away, levelling up and cutting through swathes of gnomes and goblins required?

Well, that depends entirely upon your tolerance for stat-heavy RPGs and their many trappings such as XP accumulation, hit points and overtly daft, fantasy names. But then again, if a ‘Bloody Bastard Sword’ sounds like the kind of weapon you’d love to swing through the jugular of a charging wild boar, then do read on.


In Sacred 2, something is rotten in the realm of Ancaria, with the mysterious life force of the land known as T-Energy leaking all over the place mutating anything and everything in its path. And that’s really all there is to the story, which is standard, perfunctory nonsense that simply serves as an excuse to embark upon an epic quest. The nature of that quest however, depends entirely upon the initial choices that you make during the character selection process.

There are six fixed gender character classes to choose from in total, including the thoroughly evil Inquisitor and the thoroughly good Seraphim. The remaining four classes can go through the campaign adopting either the path of light or shadow, whereas the alignments of the Seraphim and the Inquisitor are fixed. Once you’ve picked your character and maybe messed with the style and colour of their hair if you fancy, you’re then dumped into the sprawling world (22 square miles, fact fans) of Ancaria where the lure of hundreds of quests and hundreds of hours of levelling up awaits.

As open-worlds go, Ancaria is not the most inspiring we’ve seen and navigating your way between quest waypoints and settlements can be a real pain. The entire realm is mapped out for you, which can be accessed via a quick press of the SELECT button, but even having a tea-stained map at your fingertips fails to alleviate the headaches that come with merely getting from A to B. Being able to teleport between resurrection landmarks can sometimes help a bit, but not much. The number of times you’ll find yourself marching towards a mission marker in what you think is the right direction, only to end up on the wrong side of a river or stuck staring at a cliff face or staring down from a cliff edge, will have you grinding your teeth in silent frustration. It’s a good job that the landscape is generally quite pleasant to look at and the atmospheric background music is quietly soothing, because otherwise we’d have spit four-letter words at the screen in a volley of vitriolic bile and phlegm.


But there’s something inexplicably calming and therapeutic about playing Sacred 2, like somehow the repetitious hack and slash, badly voiced NPC dialogue and myriad of objects to loot lulls you into a hypnotic trance. Rewards come thick and fast with every vanquished enemy dispensing an XP value (which you can switch off if you like) and more often than not, a new item of some description. This reviewer normally wouldn’t be caught dead playing a game of this type (that’d be one hell of a trick), but I found myself getting more and more engaged by the multiple quests, random offbeat humour and slightly vanilla fantasy setting.

Perhaps it’s more to do with the amount of tinkering you’re encouraged to try during the course of the game, with hundreds of pieces of armour and weaponry to play around with, simplistic combat abilities to learn and master and skill points to carefully assign to your burgeoning attributes. Or maybe it’s down to the inadvertent amusement brought about by the dopey enemy AI, which allows several of your arrows to swoosh past their faces or two to plunge into their back before they realise anything’s going on. And fighting a single sewer rat to the most intense, melodramatic score ever, will never fail to raise a laugh. The game is full of little idiosyncrasies that coax and charm you into submission, spurring you onwards through each quest. Whatever the case, we found Sacred 2 hugely playable, although we can’t really explain why in any great detail. Suddenly, I feel somewhat ineffectual as a games writer. No matter, because come hell or high water, there’ll still be a score at the end of this review.

Anyway, there’s also more to Sacred 2 than its immense single-player campaign, as there’s four player online multiplayer and a local two-player mode to enjoy. Any progress or items you obtain during a multiplayer game also carry over to your single-player campaign, so the game remains persistent, which means you can mix it up a bit - should you wish - without affecting your character in any way. For the most part, the action remains smooth during online play, although we did encounter a couple of instances of frozen crashed games and even playing offline we noticed some slowdown at times.


Still, the game’s technical niggles are minor complaints that pall when considered next to what in our opinion is the game’s main issue – the insipid setting and the anodyne story. Both make this a fairly indistinctive game, with no real identity of its own. Also, the repetitive nature of the exploration and combat will grate with the majority of players after a while, especially those with lesser attention spans. While this might sound like needlessly harsh criticism, bear in mind that Sacred 2 is still a decent enough RPG title; it just doesn’t possess any element noteworthy enough to endure in the memory once you’ve exhausted the vast potential hidden away in its enormous world.

As RPGs go, Sacred 2 is likeable enough, but as a console game it doesn’t quite gel. It’s an admirable adaptation, and the menu pages that you navigate through using the triggers work really well, as does the combat, which has been ported perfectly to the Xbox 360 and PS3 controllers. Our only misgiving is the severe lack of personality and character, which ultimately leaves the game devoid of any real propulsion to its action and that just leaves us feeling a little bit cold towards the whole thing. Nonetheless, if story, characterisation and personality are at the bottom of your RPG checklist, then Sacred 2: Fallen Angel may well be the game for you. We just think the whole thing could have used a bit of that pesky T-Energy to transform it into something far more special.

Bludgeoning an army of squeaky-voiced gnomes (sorry, Kobolds) with a flaming hammer. Worth the asking price alone we think you’ll agree. 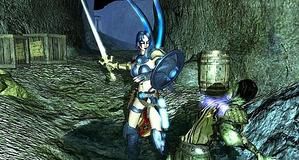