The government is completely obliterated, causing six different sections of the country to join together to try and put the country back together

Because of the state of the nation today, it is easy to identify with PopTop’s Shattered Union.  The principle of the game is typical of epic stories and splendid struggles.  Shattered Union introduction presents a very controversial election after which one of the most unfavorable presidents in history takes control.  Before long, terrorism has spread all over like crazy.  There is another debatable election and the same man is put back in the country’s driver seat.  During the inauguration ceremony, a nuclear weapon explodes in the nations capital and destroys all of Washington DC. The government is completely obliterated, causing six different sections of the country to join together to try and put the country back together with acts of both protection and aggression.


The opening presentation is lacking, and other than the news updates detailing Russia’s role in recent anarchy, there really is none.  A little bit more background information other than just the single paragraph before each faction would have also been a nice addition.  The terms and concepts of any sort of graphical strategy is difficult to grasp because there are states like Washington, Oregon, and Idaho that ban together and yet go against California, Nevada, and North and South Dakota.

The separate territories are allowed to attack any of the bordering nations or states.  Every territory has its own unique values and units that goes along with them in the forms of fuel upgrades, cost to purchase, and repair units.  Other than that, the main and only basic strategy you will have to use is how many troops to use on the battlefield.  A difficult twist is added so that any units or defenses your army uses during a battle, either to attack or defend, cannot be used again until your turn comes back around.  This means if you are attacked or attack with all of your defenses your territory will be left defenseless and you may have to surrender to a territory without a fight.  The flip side to this is that you are able to use a hit and run strategy where you can fly in, destroy as much as possible, and get out before any of your own units are destroyed.  This gives you the chance to get one up on your enemy and weaken them without losing anything yourself, if everything goes right, of course.  This causes the strategic game to go back and forth producing a slow game.

As far as intelligence goes, other than other a strength bar, there isn’t much to be known about the other army’s ability.  This strength bar pretty much just shows how many units the army has and doesn’t really tell you exactly what they have available to them for attacking and defending purposes.  This was surprising, considering the level of recon data available to armies today.

Despite these things, the tactical game is actually pretty good.  It is not that difficult to understand and has an adequate depth of strategy and tactics.  When you are deciding whether or not your army should attack or defend a specific territory, you will be forced to choose which specific units you want to bring to the battle.  When doing this, you must remember they may have to be used for defense in a later turn.  This makes for what can be a difficult decision.  These units can then be placed all around the map; this will make you consider the value of different places on the map.  There will be points in the game where it might be better in the long run to let certain territories go under enemy control.


Players will have to decide what department of their army would be better in every situation.  For example, infantry is better in cities and forests, partisan units (if available to you) are excellent scouts and not too expensive, and fighter planes and bombers can be launched during attacks also.

Enemy artificial intelligence is not too shabby.  They do a good job of knowing when and where to move and how to take advantage of your bad decisions.  Of course, a real person would put up a better fight and be more challenging, but this AI is not bad.

One intriguing aspect of Shattered Union is the fact that every map has a direct effect on the ending of the game and what resources you are equipped with.  Every territory your army is able to take over has special items for your army, such as a map giving you bonus infantry.  Once these things are taken or destroyed they are gone from the game forever and cannot be taken in by another territory.

Even the political reputation you derive in Shattered Union can help or hurt your cause.  If you have a fairly good reputation you will get better extra powers during battles than what an army with a bad reputation will receive.  Every time you attack without concern of collateral damage your rep will decline.

Overall, Shattered Union is a pretty decent game.  While it isn’t a game I would die if I didn’t have it, it is definitely worth purchasing and playing.  While the maps are a bit dull, the tactical battles have the potential to be lots of fun, especially if playing a human opponent who is not as predictable as the computer.

The best part of Shattered Union, in my opinion, is the political reputation.  For once, being good and playing nice finally pays off!  A good reputation can get you anything from nukes and WMD’s to jamming powers to stop enemy vehicles, whereas a bad reputation won’t get you anywhere. 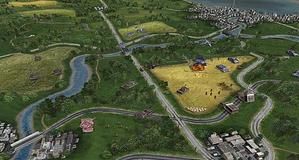