Sometimes a game can get very far on just one clever mechanic. Black Lab Games’ deep-space strategy Star Hammer: The Vanguard Prophecy is an excellent example of this. If you were to replace its signature ‘WeGo’ combat system with traditional RTS or turn-based mechanics, you’d end up with an unremarkable, derivative experience propped up by a forgettable campaign. Thankfully, Star Hammer’s excellent combat transcends its rather lacklustre presentation.

Here’s how it works. At the start of each round, you’ll assign movement trajectories to your corvettes, destroyers and battleships. The enemy AI does the same, unseen. Once you’re ready, you click ‘play’, and your ships carry out your instructions in real-time, simultaneously with the enemy fleet. A few seconds pass, and then the game pauses again to let you take stock of the situation, and plan another move. It doesn’t sound all that exciting written down, but in practice it’s a tense duel of guesswork and second-guesswork, as you try to predict your target’s direction, while maintaining formation and keeping your strongest shields angled to intercept enemy fire.

It’s a simple concept, but the game adds plenty of complexity to keep you on your toes. Generally it’s best to group your fleet together for protection, but that means some careful planning if you want to avoid accidentally ramming into your capital ship. Collisions are not only hideously damaging, but can also knock out your ships engines for a round or two – that’s bad news when a full barrage of plasma is headed your way. Thankfully the game ‘ghosts’ your planned trajectories so that you can see where each ship’s model will end up after a move, and these transparent images flash red when an impact is imminent. There’s also several planes of vertical space, so you can pull up or dive below an onrushing vessel in an emergency. 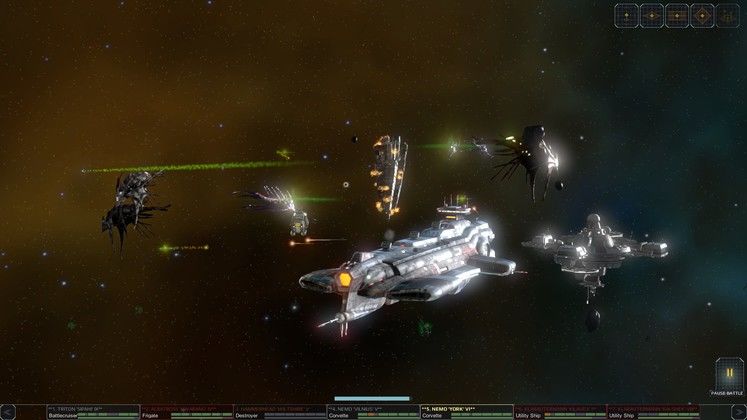 Reinforcements are in short supply in the campaign, so losing even a single ship can be devastating

Depending on the tactical situation, you can adjust the power settings on each individual ship. If your fleet is taking a hammering, it might be best to revert all power to shields, enacting your repair bots as you do so to slowly regather your strength. If you’re racing past an oncoming fleet towards an objective, pumping power directly to your engines might be a better bet.

Star Hammer is also smart in that it never swamps you with a huge number of ships to control, which could turn a game of quick, tactical decision-making into a bogged-down mess. You’ll only ever control around five vessels, and it’s the key differences between these vessels that you’ll need to master in order to succeed. The campaign introduces you to each ship class gradually, letting you get used to their particular foibles. The first ships you’ll use are the raider and the corvette, speedy little devils with forward-facing laser cannons that rely on manoeuvrability rather than armour to escape punishment. Frigates are slow support ships that pack both a front-facing stun cannon and a formidable broadside, as well as an invaluable sensor disruptor that detonates missiles before they can reach your fleet. From there you’ll upgrade to battleships and dreadnoughts, which offer ludicrous firepower and, in the case of the latter, several squadrons of drone fighters that can either defend your convoy from fighters, or swarm enemy capital ships. 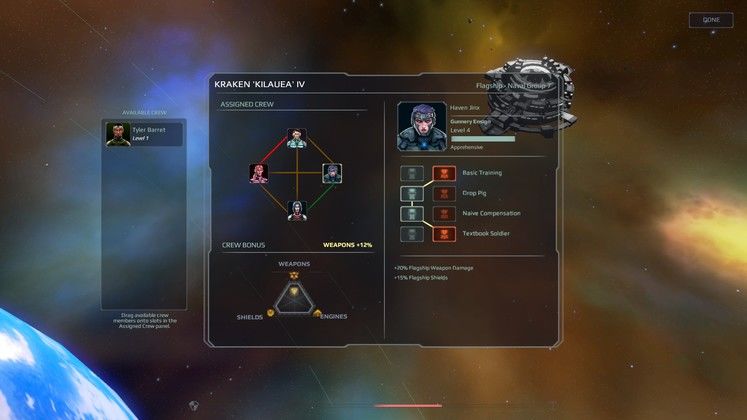 There's a crew morale system that rewards you with bonuses to your flagship's stats, but the mechanic is confusing and feels like an afterthought

What the game absolutely nails is the feeling that spaceships are not point-and-shoot gun platforms, but slow, unwieldy juggernauts that operate much more like naval ships of the line, and require you to take both facing and formation into account. For a game that keeps things relatively simple on the tactical side of things, there’s still a huge amount to consider every time to plan a turn. Do you want your Frigate to head straight-on to those enemy vessels, utilising its stun-cannon to disrupt their line, or is it better to play defensive, fire off a missile countermeasure and peel slowly off for a long-range broadside? Do you storm right through the enemy line with your flagship, risking a damaging collision, or do you skirt the edge of the battle-zone, picking off their lighter ships before engaging the heavy-hitters? In Star Hammer you won’t overwhelm the enemy with sheer numbers, or rely on tired rock-paper-scissors mechanics to win; victory requires planning and careful, tactical use of your limited assets.

Judged by its combat system alone, Star Hammer is a triumph, so it’s a shame that the rest of the game doesn’t quite match up. The campaign is a half-hearted conveyor belt of repetitive missions, in which you repeatedly mop up huge swarms of Nautilid ships. These bizarre, insectoid foes lack shields and gun batteries, and instead rely on their tough organic hides and deadly bio-missiles in combat. They’re fun, unpredictable foes at first, with a number of specialist ship types that pack some nasty tricks, but after 30 or so missions that set you up against the same enemy forces again and again, even Star Hammer’s excellent combat struggles to keep your attention. There’s just not enough variation in mission structure. You’re periodically tasked with escorting valuable VIPs or defending key locations, but the ultimate goal is almost always the same; wipe out the entire enemy fleet. 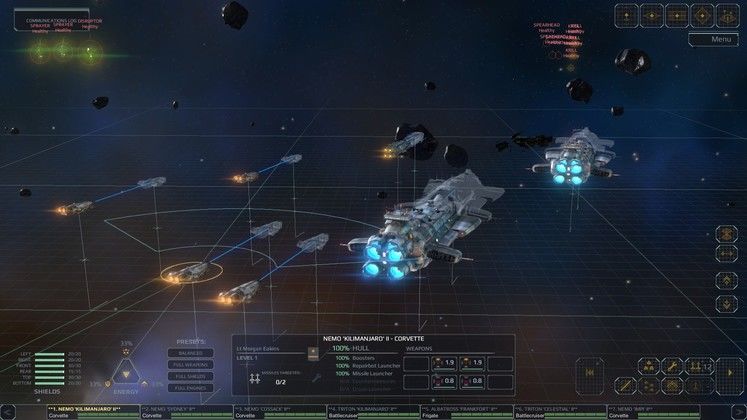 The few sub-systems present in the campaign don’t do much to flesh things out, either. There’s a crew morale mechanic that encourages you to mix and match your personnel in order to earn a sync bonus to your capital ship’s statistics, but you’re limited to rather boring percentage increases rather than anything that really changes the way you approach combat. Netting 10% extra weapon damage is all very well, but it’s kind of hard to parse in the midst of battle. A defensive/offensive stance system that apparently governs which side-missions are unlocked is similarly half-baked; you earn points towards each stance depending on the approach you take in battle, but the game’s so heavily skewed towards offensive play that I couldn’t work out exactly how I was meant to rack up a defensive score.

I’d still recommend Star Hammer, despite its disappointing campaign and the lack of any kind of multiplayer. This is by far the most effective and fun space-strategy combat system I’ve ever played, and it kept me playing long after it became clear that the game’s story really wasn’t going anywhere. Black Lab is really on to something here, and I’m hoping that the development team treats this first game as a proof of concept, and builds on that excellent core mechanic in the future. With some more creative level design and a fully fleshed-out campaign, Star Hammer could have really been something special.

Swinging your destroyer and dreadnought side-on for a devastating broadside, while your speedy Corvette zooms underneath to take down an enemy fighter. 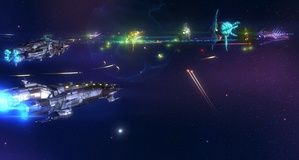