Stellaris upon launch was a great sci-fi 4X strategy that had a set of specific problems. The major complaint was about a lack of mid-game content for players to get their hands on. Critically acclaimed and well received upon its debut, Stellaris picked up a strong community of players and modders.

The fact that Paradox allowed steam workshop support, not only increased the games longevity and replayability, but it helped the game resolve its content crisis. Now however, Paradox have released the Leviathan’s Story DLC which looks to address mid-game content as its primary purpose.

Alongside the paid DLC also comes the latest free update containing bug fixes, user interface improvements, space creature reworks, and some major changes to the in game systems. The ‘Heinlein 1.3 update’ complements the new DLC well and players should get a lot out of the free patch.

The leviathans content is a major addition to Stellaris, bringing to the table new gameplay and new ways to advance and expand your empire. The new enclaves are one such feature. Enclaves are the remnants of past civilizations that have decayed into small but formidable factions. Enclaves come in three types; traders, curators and artisan. Each type of enclave offers something unique, but the first one we should mention is traders, who will trade resources for other resources and should you get a high opinion from them they will trade the valuable strategic resources with you too.

Curators are the bastions of technology and often can be a tough nut to crack. They are experts in research and technology and should you be good enough to broker a trade deal, they can provide you with a wealth of knowledge and benefits. Artisans on the other hand are an enclave that focuses on your population. They can provide growth and happiness benefits, such as organising an empire wide celebration that will give you certain bonuses.

Even if you discover an enclave early on in the game, they don’t really become useful until mid-game due to your empire lacking anything of value. Enclave opinions change slowly over time and can be heavily dependent on your empires ethics. That being said, if you invest enough time into them, they can become an invaluable resource to utilize.

Other than trading however, enclaves feel somewhat lifeless. They make no active attempt to act like another race. I certainly felt that the enclave system could be expanded further to add some interesting content, maybe they could give out quest-lines directly relating to their past? Either way, there’s more that could be done with them.

Fallen empires are used even more in the new content, the biggest being the ‘war in heaven’ event. This event is a galactic wide event that takes place when two fallen empires go to war with each other, dragging the rest of the galaxy with it. Players can choose to join a side or try and stay out of it, but other AI factions will become involved which can escalate into a giant galactic war.

The War in heaven event can be a huge amount of fun and depending on your game difficulty, it can put your skills to the test, with numerous events helping to make the galaxy feel really alive. Outside the event, fallen empires can also now become awakened should certain conditions be met, and they will gain new traits and goals thus beginning their expansion once more.

There’s a few new additions to our Stellaris Mods page that you’ll definitely want to use!

The crowning feature in Leviathans is of course, the Guardian Leviathans themselves. These eight guardians are comprised of different things. Some guardians are giant space creatures, others are old technology, but all are formidable encounters. Guardians guard rare treasures such as technology, but claiming that prize comes at a heavy cost. When I say guardians are formidable, I mean they are tough as hell, they are essentially boss fights. I love the idea of boss battles in a 4X strategy, it’s certainly something you don’t see every day.

Guardian Leviathan’s are going to require a large, powerful fleet to take down and even then, expect heavy losses. Encounters are tough, tense and look epic. Each guardian is unique and will require different tactics to take down.

The great thing about many of the minor changes made in the new content is that the game is now open to much more play-styles. Changes have been implemented so that things like having population farming worlds is now a viable thing.

A few improvements have been made to Stellaris with the free update patch, including changes to the bloom and UI. The game overall looks great and runs very smoothly at a solid 60fps, every time I boot the game up I remain impressed on how sleek the design is.

The sheer array of improvements made to the core systems alone by the expansion and the accompanying free update have left Stellaris in a better place than ever before. The fact that people can play more ways than ever really opens up the game to more strategies both short term and long term.

Leviathan’s specifically has addressed mid-game content issues that have plagued the game since launch. The new content provides a great addition to the game that offers a nice balance between risk and reward.

The Leviathans DLC is in my opinion an absolute must for Stellaris players. The content offered is high quality and produces some great in game experiences. The additions add strategic depth to the overall game and frankly, I couldn’t see anyone going back after playing this.

Fighting on the eight guardians is a breath-taking spectacle, easily one of the most fun and rewarding things to do. 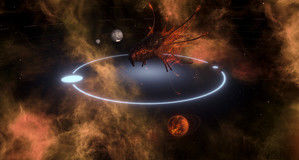