The grand strategy game the universe has been waiting for

With a back catalogue that boasts the likes of Crusader Kings, Hearts of Iron and Europa Universalis, Paradox Interactive’s internal development studio has a proven track record when it comes to grand strategy games. Their latest, Stellaris, ditches the historically accurate interpretations the Swedish outfit have tended towards in the past, and embarks on a sci-fi-inspired journey through the cosmos some 200 years into the future.

Although against unaccustomed surroundings, Stellaris offers players a familiar blend of complex real-time strategy with 4X elements, leaning towards the latter in terms of interface and complexity; scaling its difficulty towards its mid-game onwards. Similar to Paradox’s last outing, Europa Universalis IV, Stellaris has been built with accessibility in mind as it aims to welcome new players to grand strategy without compromising the depth that underpins the genre.

Looking to its 4X groundings, Paradox have also cited exploration as an area they hope to capitalise on this time round which, at first glance, paints Stellaris as their most ambitious project yet. In turn, this begs the question: does it succeed in what it sets out to achieve?

Upon launching a new game, you’re met with Stellaris’ comprehensive customisation suite. Here, you’ll craft your government, your race, your politics, your flag, the type of worlds you’ll best inhabit, whether or not your civilians practice religion, and a whole host of other variables relevant to your style of play. Perhaps you’ll embrace a militarist Science Directorate of Anthropoids who’ve a penchant for research but aren’t afraid to get their claws dirty? Or maybe you’ll champion a Fanatic Pacifist xenophile ensemble of Reptilians who want nothing more but to make friends and to explore the galaxy? Races are represented by hundreds of charming and charismatic portraits and if you’re at all familiar with Paradox’s previous titles, you’ll immediately appreciate just how streamlined and eye-catching this one is presented. 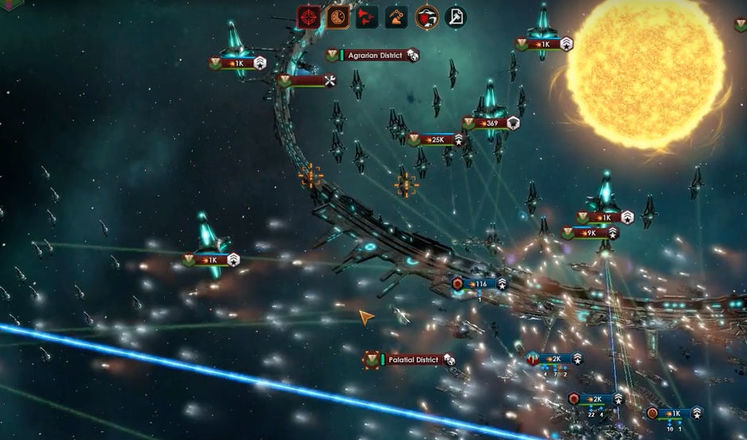 This striking aesthetic carries on into the main game itself. Due to the sparse and sprawling nature of the setting, space games are occasionally guilty of portraying cold, detached, personality-less arenas, however Stellaris’ universe feels alive from the first moment you take to your otherwise isolated solar system; to your final devastating intergalactic war. Like the many grand strategy games that have come before it, the name of the game here is to grow and expand your empire and while races have distinguished idiosyncrasies, each begins on its own remote corner of the procedurally-generated universe where it must explore and expand thereafter. Medium-sized galaxies comprising 600 stars are a good place to start, however playgrounds range from tiny configurations that span just 150 stars, to huge structures that stretch to 1000.

Once settled, Stellaris promptly addresses its drive towards accessibility by introducing players to its Advisor Online - a handy didactic bot that provides assistance via a “full tutorial” of continually updated information and pointers, or “tips only” that offers advice sparingly. Neither is obtrusive - both provide help, but neither hold your hand - however you can turn the service off altogether and can reactivate it at any time via the settings menu as you require. In conjunction with this, your Situation Log is a self-updating list of objectives that points you where to go next, acting in the same way as EU4’s Missions Dialogue.

Expansion comes by way of sending science vessels into the unknown to survey adjoining systems. There, your ships gather information, source mineral stockpiles, suss out whether or not neighbouring planets are habitable, and determine the hostility levels of alien lifeforms. Once they’ve completed their reconnaissance loops, you’ll send in construction ships to build mining stations and research facilities in order to extend your reach on both physical and intellectual fronts. Racking up a decent amount of minerals to build said new facilities is essential in the game’s early stages. While this is happening, your scientists work ardently in the background, researching whichever new technologies and capabilities you instruct them to, all of which will help you grow further still down the line. At first it’s a slow process, but such is life in the galaxy-building game. Andromeda wasn’t built in a day. 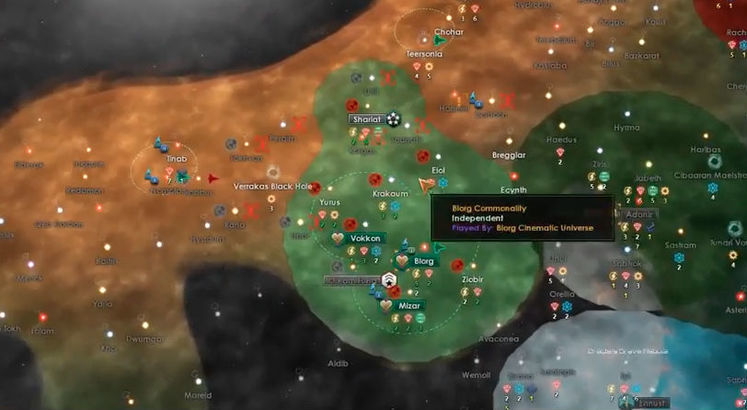 Once you’ve devised the appropriate tech, colony ships can be constructed, which is where expansion steps up a gear. Although procedurally generated, Stellaris’ galaxies are designed in such a way that there is always at least one viable colony in the vicinity of your home planet. Once you’ve identified it, you can ferry some of your population units - or ‘Pops’, as they’re known in-game - to pastures new, however it takes time for full Pops to establish themselves, and they’ll significantly drain your economy in the meantime. Rapid expansion, then, isn’t always the best way forward so as to avoid bankrupting your mineral and energy unit reserve early on. It’s also worth noting that not all types of world are inhabitable - not even with late-game techs - meaning planning two and three and four steps ahead quickly becomes essential.

Micromanagement of planets is structured around a tile system which, although hardly revolutionary, provides perks such as adjacency bonuses and unlockable building updates in exchange for resources. In order to govern superfluous micromanagement, you can only control a certain amount of planets directly at any one time, however to expand beyond this, you’ll need to assign groups of planets to Sectors - a feature which promotes full autonomy and wide-scale expansion. For those players familiar with Crusader Kings II, this is somewhat comparable to how vassals work there.

As you grow, you’ll eventually encroach on foreign borders. Before long, invasion will become the only feasible way forward therefore combat, as you might guess, is the key to interstellar subjugation. Similar to the rest of Stellaris, your fleet of military ships can be customised with everything from a fleet’s name and appearance, to its components and missile-type being interchangeable. Combining fleets to form armies boosts your firepower and orders are issued via entire squads, not individual vessels. Longer-term strategy, then, plays a larger hand than minute tactics while engaged in skirmishes. 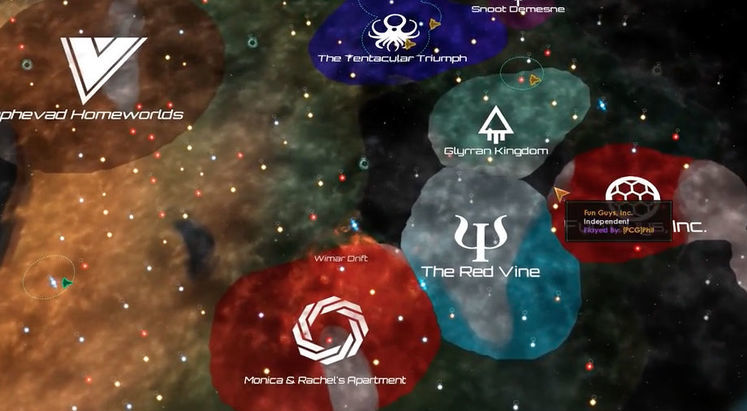 Aesthetically, warring in Stellaris looks fantastic and while succumbing to a stronger foe in the early stages can be a nightmare from a logistical perspective, there’s a perverse joy in seeing an overpowered enemy destroyer take down one of your lowly corvette class fleets without batting an eye - a stark reminder that you’re not the only civilisation out there, and you’re certainly not the most powerful. Although these scenarios are best avoided, if you do find yourself caught up in an unwinnable tussle, engaging an “emergency jump” allows you to disengage and FTL travel home. While in this status, though, you’re unable to retaliate and are more susceptible to damage so pick your battles wisely. That said, you could always research battleships and return all guns blazing.

War isn’t always the answer, though, as exploration is equally as vital in dominating the cosmos. To this end, perhaps Stellaris’ greatest achievement is its sense of inclusivity. Unlike other 4X grand strategy games that relegate things like science to a secondary or tertiary service, here a high-functioning science fleet is as integral to success as a dominating military set up. In one single-player game, one five-star scientist successfully researched the flight path of an incoming asteroid and advised we deal with the threat ASAP. Had we not done so, it’d have eventually collided with our solar system, thus this science fleet temporarily donned the hero role - a status normally reserved for intrepid military outfits.

Random occurrences like this are what make Stellaris shine. Although conquering the universe is the game’s purest raison detre, success demands more than simply filling up space on the map. As time wears on, for example, you may find that internal conflict poses a greater threat than those around you do. In another single-player playthrough, my civilians grew tired of our nation’s militaristic purview and staged a revolt calling for the head of state to resign. While attempting to resolve our political in-fighting, distracted, I was invaded and vassalised by a neighbouring empire - an outcome that saw us either agree to semi-autonomous political and economic control under the banner of a xenophobic race of militarist cats, or, well, die at the hands of the bloodthirsty felines. We choose the former, but it transpired the latter may have been the better option. 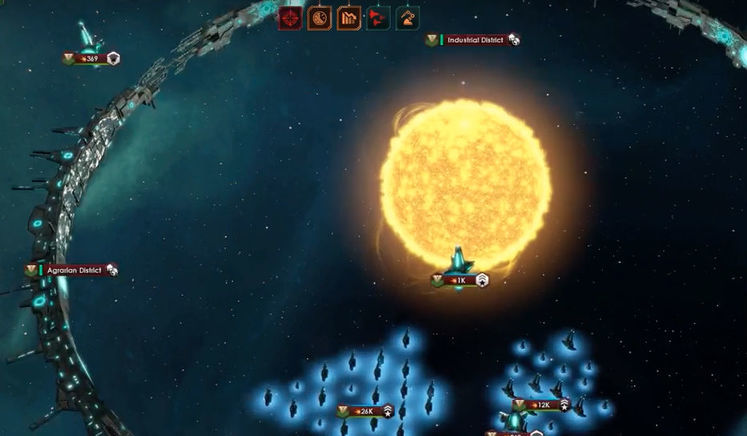 While there’s no one route to guaranteed victory in Stellaris, balancing risk and reward is what makes it enjoyable. Will you vassalise your neighbours? Make peace and share resources? Declare rivalries? Wage war? Form an alliance or create sprawling federations? How you go about your space-flung duties is up to you and no two games play out the same. And with modding support in the pipeline long-term, who knows what other unique occurrences might present themselves once the game’s community puts its own spin on things.

Having sunk multiple hours - days, in fact - into both Stellaris’ single and multiplayer campaigns, it’s clear the latter is where the game shines. Single-player is undoubtedly great fun, however Stellaris comes into its own when played alongside friends/enemies/sworn intergalactic nemeses online. For more on this mode, check out our Stellaris multiplayer pacifist experiment. 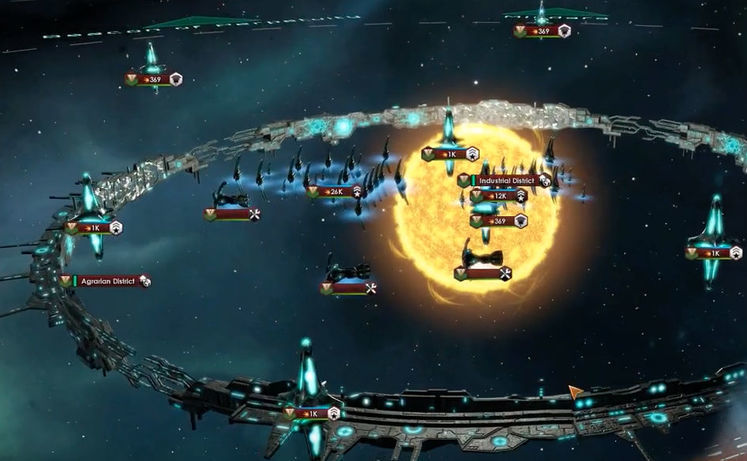 No issues running a mid-high end build on top settings. Stellaris is without doubt Paradox’s most striking grand strategy game to date, however, as with any other genre similar game, performance trumps looks every time. As such, if your build suffers dropped frame rates or lag at the top level, be sure to dial down your settings for a smoother experience.

Support GameWatcher and order Stellaris from Games Republic where it’s priced at 10% off at £29.74.

Stellaris is simply wonderful. If you enjoy grand strategy games then you’ll love this. If you don’t then this could be the one to change your mind. If you’ve been too intimidated to try the genre before now, then here’s your ideal starting point.

Conquering the universe. Getting (resource) rich, or getting vassalised trying.