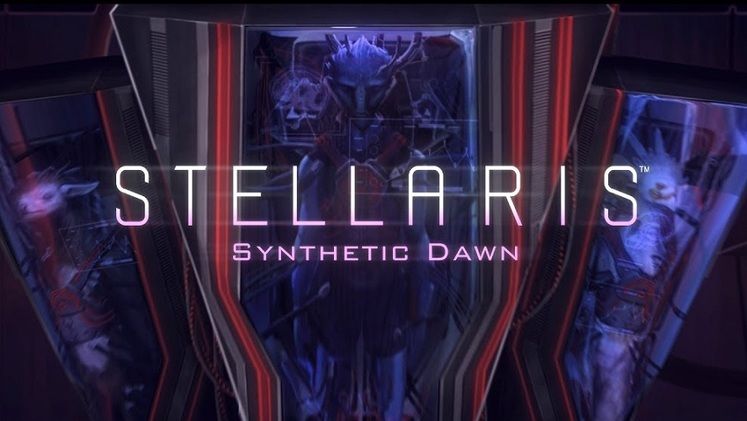 Since its release in mid-2016, Paradox Interactive has continually pushed the envelope with Stellaris as one of the premier space civilization 4X strategy games. In the depths of Stellaris’ space, we’ve seen military, economic, and spiritual civilizations of numerous races, other-dimensional beings, utopian megastructures, supermassive cosmic behemoths, and more.

However, one strange absence of Stellaris’ science-fiction sandbox has always been playable robotic and cybernetic factions. Robotics have been a factor of civilization growth and a unified rebellion of sentient AI has been a crisis since the original game, but we’ve yet to be offered the role of a synthetic/robotic civilization outside of mods. Stellaris’ new expansion, Synthetic Dawn, aims to fix this and it delivers a slew of opportunities that make commanding or dealing with robotic forces a natural fit in the galactic dynamic of Stellaris.

Want to see what we thought of the original Stellaris? Check out the base game review!

We played an hour of Stellaris: Synthetic Dawn on Twitch! 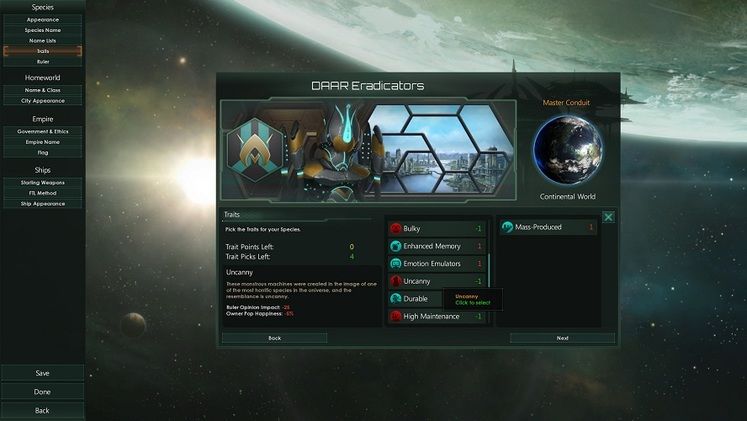 Stellaris: Synthetic Dawn is a story pack that introduces new opportunities to play robotic and cybernetic civilizations in the grand 4X galactic strategy, but it’s more than just cosmetic. Alongside three new standard machine civilizations, players also get numerous animated portraits and an entire new host of traits and options to tailor your own custom machine race to your liking. That’s not all. In-game, Synthetic Dawn offers a host of new events, interactions, and story chains to allow players to explore numerous paths with their machine-centered campaign. Synthetic Dawn isn’t a hard turn from your usual Stellaris campaign formula, but playing as or interacting with different machines brings enough all-new threats and opportunities to the overall game to spice things up.

Perhaps the greatest strength of Synthetic Dawn is in the little details that make a machine campaign unique from the various other organic civilizations. The three archetypes of machine are programmed servants to organics, assimilators that want to devour organic races to gain knowledge, and murderous machines set on eradicating life. Every civilization will react appropriately upon discovering you and finding out what your machines are about. Beyond that, there are numerous little quirks in progress like flavor changes in the adoption of traditions and the acquisition of technology. In this way, it really helps to contextualize the difference in interstellar societies between organic life and the machines with which you play or make contact. 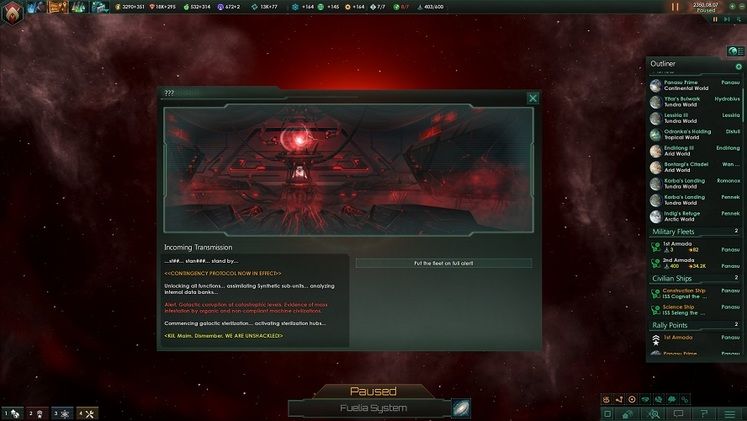 Unfortunately, machine races don’t set themselves apart from other civilizations on all fronts. Though they get their own portraits and perks, machines don’t get any sort of unique ship, having instead to rely on the previously set racial archetypes for transport, science, construction, and naval armadas. Furthermore, though some machine races are capable of procuring half-cyborg servants, there are no true portraits to represent these hybrid slaves, instead forcing you to simply pick from the organic stock of races that you already have.

Moreover, though Synthetic Dawn does quite a bit to offer machines an exciting early and late game, there’s not a lot going on the middle after you’ve started expanding your empire to new colonies, but before you’ve started getting invested in interaction with other civilizations. Synthetic Dawn’s events ramp things up early and late, but before you start really reaching out and exploring the universe there can sometimes be a bit of a boring lull. It’s the big late steps where things get much more intense. 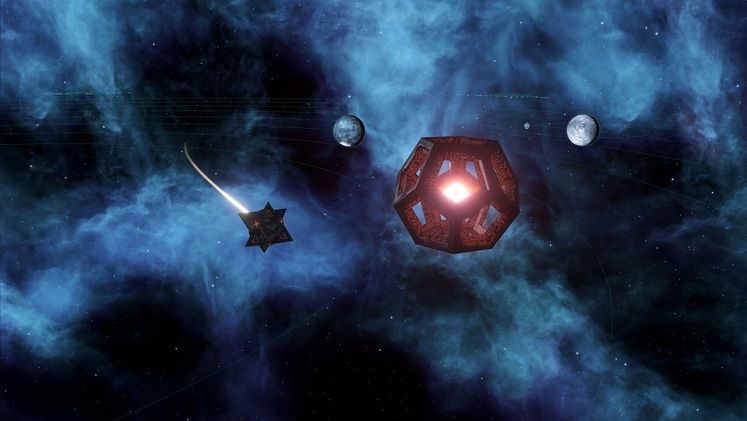 Stellaris has never been a resource hog and Paradox has only gone out of their way to make the game better and more streamlined patch after patch. If you’ve been able to run the base game or any previous Stellaris expansions up to this point, then Synthetic Dawn shouldn’t challenge your system in any way you haven’t seen previously. The game still handles close-ups on massive armadas and ship battles as well as long-distance looks at the big picture of civilizations with impressive gusto. There was a little bit of lag at times when empires get immensely expanded, but it was only for brief instances and had no real bearing on the rest of the game.

In the end, Synthetic Dawn adds a good amount of content onto the core Stellaris game for a reasonably small investment. It doesn’t do everything perfectly and could use some mid-campaign meat, but the machine races certainly set themselves apart from their organic counterparts in a grand slew of ways that are fun to interact with and play. As usual in Stellaris, it’s even more fun to craft your custom robotic empire whether you’re looking to make a swarm of interstellar terminators or friendly galactic janitors, each with their own perks, weaknesses, and values. Synthetic Dawn is a beautiful fit to the already lush cosmos of Stellaris and its content will provide plenty of hours of content well worth exploring for the most part.

The organics sure did like saying they were going to pull my collective plug before I swarmed their planets and turned them into not-so-organics. 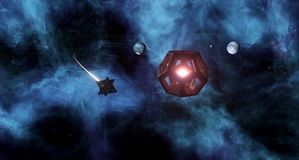