Clever Building, Interesting Combat, But is it Enough? 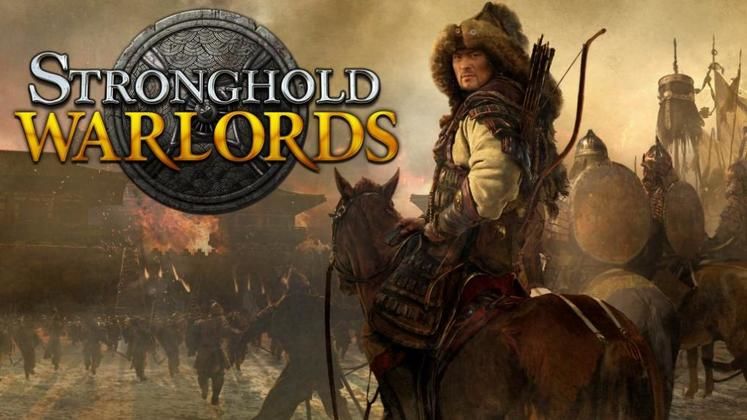 Stronghold: Warlords is in a tricky place, kind of like a lone fortress besieged on all sides. From one side come the hordes of RTS players, fresh from a good romp of Age of Empires II Definitive Edition and ready to try something new. From the other, the old faithful, those who spent hours perfecting castle and town in Stronghold and Stronghold Crusader way back in the day. Finally, from all around new faces emerge, charging into the prepared defenses of a very different kind of strategy game. Can Stronghold Warlords hold out? The bugler races to the top of the tallest tower to blast out a triumphant “Sort of!”

Stronghold: Warlords is a real time strategy game that focuses on developing a castle and adjoining town to build up enough of an army to successfully lay siege to your enemy while defending yourself from the same. There are five major campaigns, one of which focuses on economic development over combat, skirmish modes, multiplayer, and a free building mode. The campaigns and multiplayer are the meat of the game, the first preparing you to tackle the true dangers of the second, but there is definitely enough content here to keep you interested if the core gameplay mechanics are to your liking. 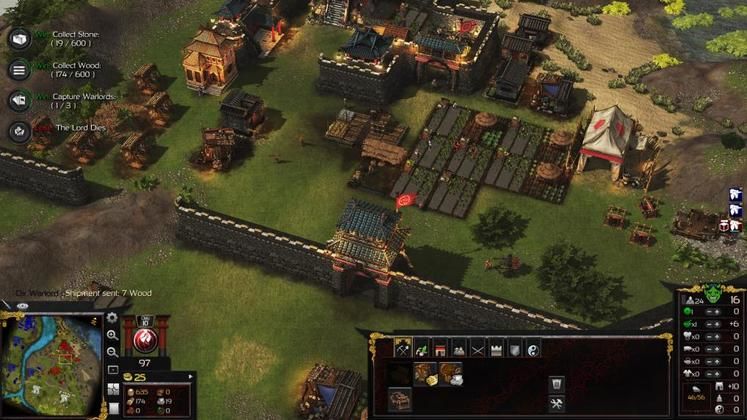 Unlike Starcraft and Age of Empires, Stronghold employs a morale system to allocate population, rather than relying on building individual workers. Therefore, the kind of housing, materials, food rations, and the like that you offer will drive up population growth, while high taxes, poor housing, and poor food will lower it. Building up is therefore a balancing act between ensuring steady growth for coin and resource harvesting and military expenditure. It takes some getting used to but is plenty fun. That isn’t to say that there is no traditional RTS gameplay to be had. There is still a war to be won after all.

There is a familiar rush to get early industry going and the proper build queues in place followed by feverishly panning the map to see where resources, the neutral warlords, and any natural choke points may be hiding. After that it’s a tug of war. Both sides need to build up a stable enough economy to afford small scale raids and enough military power to capture the new addition to the Stronghold formula: Warlords.

“Those familiar with and looking for the same gameplay from earlier Stronghold titles may be put off by this emphasis on offense, but there is enough of the classic gameplay here, and new players more used to the likes of Starcraft might not be ready for the slow start.”

Warlords dot the map at regular intervals, breaking up ownership of the whole between their own holdings and both players. With a dedicated attack or diplomatic actions, players can capture a warlord and bring them over to their side where they can be mercilessly pressed for resources and bonuses. Since both players are warring over control of these warlords, Stronghold: Warlords manages to avoid any mid game slump. There is always a weak point that you should be probing for, so the constant arms race of building up a fortress can’t be the only thing on your mind.

The grand finale of a good game of Stronghold is a full-blown assault. Siege engines, ladders and infantry clash against towers walls, booby traps, and stalwart defenders as one side seeks to take the walls and undo the opposition’s economy, eventually storming the keep and killing the player’s leader. If the defender manages to hold back the tide, they’re usually better able to launch an attack of their own, though clearing the enemy controlled warlords along the way needs to be considered as well.

Here is both Warlord’s best and potentially worst shake up to the standard RTS gameplay that many might be familiar with from other titles. The emphasis on defensive construction has now been augmented by the need to control the space of the battlefield through warlords. Those familiar with and looking for the same gameplay from earlier Stronghold titles may be put off by this emphasis on offense, but there is enough of the classic gameplay here, and new players more used to the likes of Starcraft might not be ready for the slow start. It’s a very different feeling game from the modern classics. 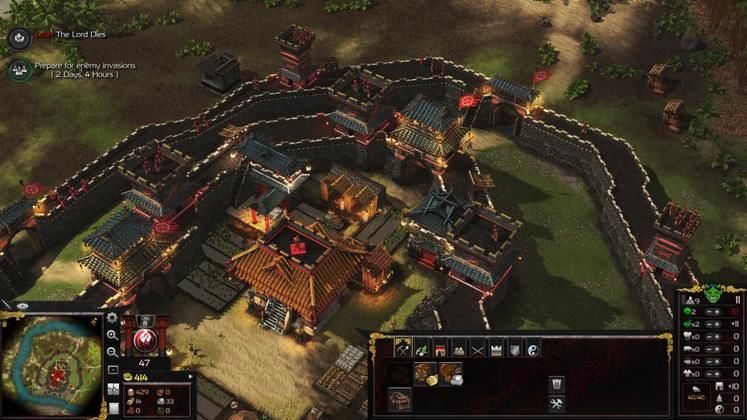 The campaign missions have good variety, even if some fall flat in the execution.

The campaigns do a good job of easing all types of players in by building up the level of difficulty and the level of complexity involved in constructing a castle town. But some of the missions are much less exciting than others, so your millage will vary depending on difficulty, skill, and interest. The final mission of the first campaign, for example, is built up as a grand defence of a doomed fortress, but in practice a few simple waves approach and are quickly taken down if enough archers are built. Other missions can be a lot more fun though, so it is worth playing through each campaign.

“But, there are very few games that can produce the kind of cataclysmic sieges that Stronghold can, and it’s great to see them reoccurring in Warlords.”

The meat of the game will probably end up being the multiplayer, and there is plenty of content there for players that are interested in a competitive take on castle building. While never as popular as other RTS models, Stronghold does offer a unique take on base building and RTS combat that might scratch a new itch if enough of a player base can form around the game’s unique systems. But that is the problem. Aside from what Stronghold does well, there may be a limit to the amount of replayability here that might mean less long-term support from players. Warlords just isn’t Age of Empires II.

But, there are very few games that can produce the kind of cataclysmic sieges that Stronghold can, and it’s great to see them reoccurring in Warlords. When the time comes and it’s clear that the full might of the enemy is descending upon your fortress, and all that’s left to do is put into action all the defensive plans that you’ve prepared for this very moment, the game comes into its own. Moving archers into position along the walls, setting up counter artillery, deploying mines, and organizing sorties of Samurai or other hard-hitting troops is just plain fun.

Visually, Stronghold: Warlords is adequate. Not the prettiest game this generation, it does manage to convey the sense of scale that is necessary for a game of fantastical castle sieges. There can be dozens of units on the map running all over and I never ran into any problems of slowdown. What I did find a little less great was the lack of differentiation between units and buildings. Many buildings have similar layouts and it will take some time to instantly recognize which building creates bows and which creates axes when they’re all crammed into a small castle courtyard.

Fortunately, there are few things that require constant management so most of the buildings can fade away into noise after you’ve placed them. I did wish there was better differentiation between some military units. From a distance it can be kind of hard to tell what is what, especially given there was no way of selecting enemy units to reveal what they’re called. It might not bother most, but there are some RTS conventions that should be followed to the letter, and rapid unit and building identification should be up there. 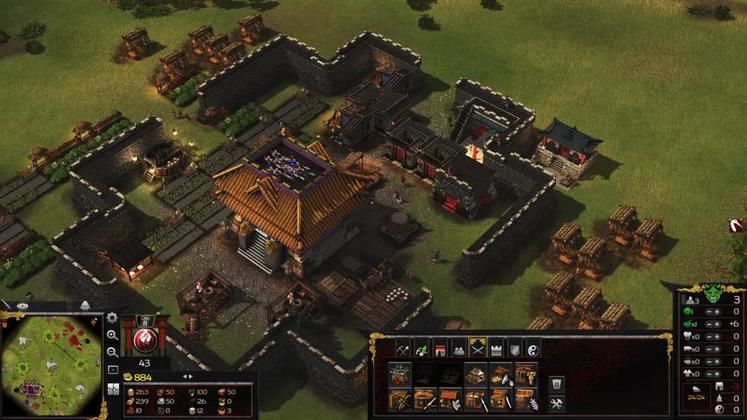 Mutliplayer engagements are where the meat of the action will be. Build quickly!

I don’t have the beefiest modern computer, with only an Intel i7-8700 CPU, 16 GB of RAM, and a Nvidia GTX 1060 3GB. Yet Warlords was able to run no problem for me on the highest settings. No matter how large engagements got I never noticed any performance issues. It’s honestly nice to see a stable RTS release.

Overall, there is a lot to like in Stronghold: Warlords if this is the kind of RTS that you’re looking for. The gameplay is a lot more static than most RTSes, though the warlords offer incentive to raid more. Building working towns and massive fortifications never quite gets dull. There’s always a feeling of wonderous sandcastle building that charms the heart as towers and staircases and gatehouses are strategically placed to maximize the suffering of your would-be invaders. But it’s not all sunshine and anti-personnel mines.

The theming honestly doesn’t really work as well in Warlords as it did in previous Stronghold games. Though it is refreshing to see East Asia and South East Asia in the spotlight, the fact that there’s not too much to thematically differentiate the civilizations during gameplay is a little disappointing. Similarly, the theming tends towards the cringy, but not in the humorous self-deprecating way that the classic Strongholds did. It even sometimes comes close to awkwardly orientalist. 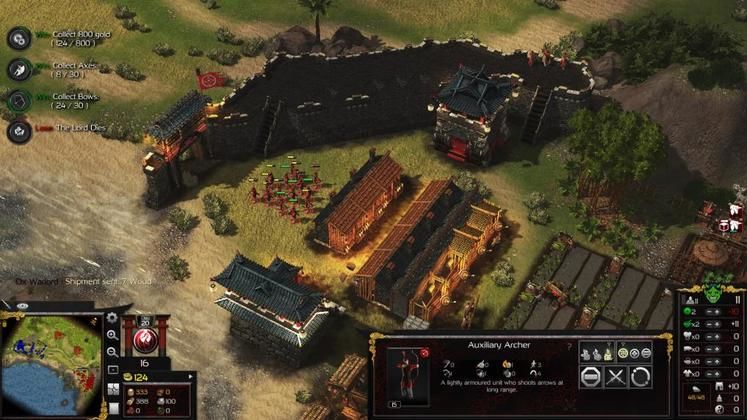 The notorious thick-boy wall. Not the most elegant solution, but always funny to construct.

There is the odd jab of humour here and there, but I didn’t find it nearly as good as the old games managed. Perhaps this will be a non-issue for many, but the set dressing wasn’t as fleshed out as I had hoped. It was nice to see South East Asia given some time in the sun with an entire campaign revolving around An Dương Vương, but that’s about where it ends for me. The rest feels like colourful flash and it could have been any other set of 3D models and the game would have been the same.

In the end does what it set out to do, mostly. The question remains whether what it set out to do was enough. Warlords does carry on the mechanics, if not entirely the spirit, of the classic Stronghold games. It does address some of those classic game’s issues with the warlord system. It does present a good competitive RTS for players willing to dive in.

That being said, there’s not a great amount of variety in building orders or strategic planning, the campaigns are serviceable, and the visuals convey the theme but fail to really stand out for players. Since there is such a different underlying gameplay system present in Warlords, I’m tempted to recommend it. When it’s fun, it’s really fun. When it isn’t, it’s still totally competent. The final thought will have to come down to whether or not building and knocking down castles sounds like a fun way to spend an evening. If so, then perhaps Stronghold: Warlord is a castle worth besieging.

Studying a PhD in East Asian military history, Joe is one half of the 'Let's talk about Wargames' podcast and a freelance games journalist.