Clean Up on Aisle 7! 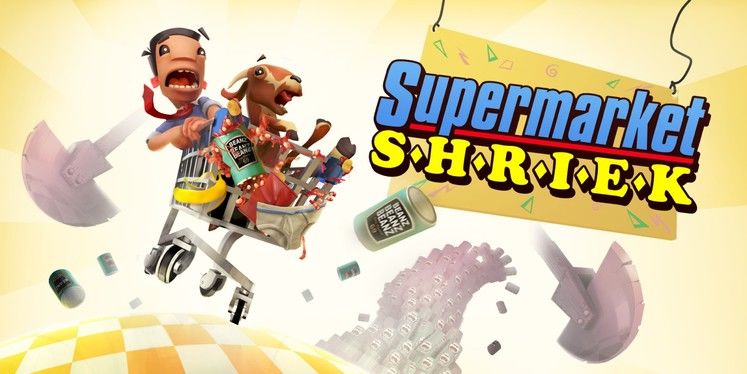 When I’m not writing reviews, I’m working my day job in retail. You see a lot of strange things there, and you meet plenty of characters. Usually, this means people running when they aren’t supposed to and someone asking you to clean urine from the floor. But in my time working at a big box store, I’ve yet to see a man and a goat scream in a shopping cart to do some sick drifts. This is Supermarket Shriek in a nutshell: a very British game that follows in the footsteps of other “wacky to control” titles. Originally an Xbox exclusive, it’s now available for PC, PS4, and Switch. Even if the game itself isn’t for everyone, it’s always a good sign to see more titles made multiplatform. After all, gaming should be more accessible instead of less. But let’s see what Supermarket Shriek does as a racer and whether it’s for you.

The plot is pretty bare bones: You’re a dude who gets trapped in a shopping cart with a goat as you both scream and race your way across various shops and various stores to get to your destination. Even though this is a game where you both are screaming constantly, it doesn’t get grating. Somehow, the screams never get as obnoxious as they should. In fact, the wacky set dressing for the levels are solid. Slamming into shelves, knocking down mannequins, destroying stacks of beans, it’s enjoyable slapstick. Once you get into the game properly, its more noticeable issues come out to play 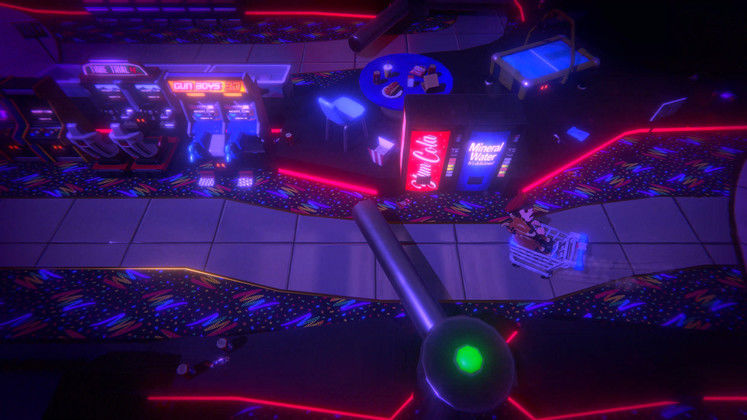 Supermarket Shriek is a racer that has you screaming your way across various shops that are somehow filled with deadly saws and lasers. The game predominantly uses two buttons: one for the man to scream and one for the goat. This means that you move forward by having both of them screaming and turn by letting one scream over the other. It’s a basic control scheme and it works fairly well. It can feel a bit slippery, but that feels intentional to add to the absurdity of it all. You can get how they work pretty well and it definitely makes it easy to pick up and tricky to master. There are also various sorts of races - from the more straightforward obstacle courses to the more destructive races that ask you to wreck as many canned bean displays as possible - and the variety in level designs work in its favor even if the mechanics themselves don’t.

The better you do in a level, the more stars you can unlock with a maximum of three per level. Stars you earn are used to unlock later streets, which culminate in a level that can unlock the next street. Usually, these levels are “Shopping List” levels, which are the game’s biggest shortcoming. These levels are more open world where you need to find every item on your list (usually by slamming your cart into a shelf) before you can go to the exit. These are the trickier levels in the game thanks to more dangerous obstacles and the higher risk of failure. It’s where the game has the most trial and error, and you’ll be resetting a lot. 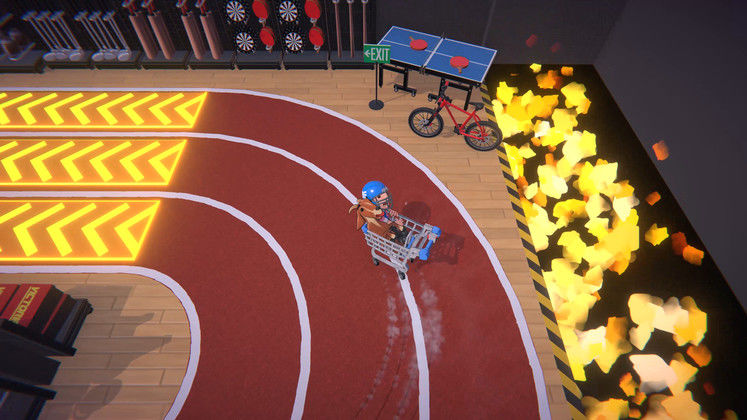 This is a game that begs you to play it in co-op mode. Not only do you unlock sweet goat-based accessories when you finish a level in co-op, but it’s how you unlock the game’s Party Mode. And while co-op can be fun for it a bit, it never feels like a necessity. After all, it’s a game that predominantly uses two buttons. Hell, it’s easy to do by yourself if you hold a controller in each hand. But if you want to make another person mandatory, you can forgo the controller and use your mic instead. That’s right, you can choose to scream with a friend to push the cart. I wasn’t able to practice this way of steering, living with three roommates and recurring headaches makes that unpleasant. It’s a funny idea though, and it might appeal to people who don’t have to worry about noise complaints.

It’s not the longest game, but it wears out its welcome fast. The slippery nature of the controls lose their humor when the game gets tougher and it makes any desire to get that third star in a level float away fast. It’s not enough to properly rage quit, but I definitely needed to step away from the game at times. It can be rewarding to do well at a level, but the incentive to get better was never really there. This makes for a title that’s fun at first, but not enough to make you want to properly finish it. It might be fun to play one afternoon with your mate in lockdown, but playing more is just for the completionists out there.

Supermarket Shriek has its moments and might be the sort of chaos you’re craving, However, its racing thrills can get stale and its longer levels can suck out the fun. There are worse games that use these sorts of novelties, but it won’t hold your attention for long.

That secret Superhot parody made me giggle. 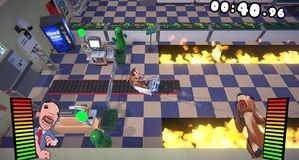