Sword of the Stars II

Sword of the Stars II Review

It's playable, but enjoyable? That's going to need a bit more work

It's hard to talk about Sword of the Stars II as a game without talking about the circumstances surrounding it. As many of you will have heard, it's in a pretty dire state right now, with the dev team having to work round the clock to fix things. Out of respect for past achievements - both from Paradox and Kerberos themselves, we gave the development team two weeks to do what they could, at which point we'd give our review, and now here we are. You'll be pleased to know that, at the very least, the game is more or less stable and playable now. Whether or not it's enjoyable is another kettle of fish. Fish that we suspect are dead.

If you remember from our preview coverage over the past year, there were several key changes to SOTS2 over it's predecessor. First and foremost was a complete engine overhaul, with the new engine (MARS 2.0) looking incredible. It wouldn't surprise us if most of the money and time went into getting the new graphics down and polished, because they really do look good, and really bring the Real-time battle portion of the game to life. At the time of writing, most of the content in this particular section is there, bar the odd ship behavioural tweak, graphics effects, and there are some ship design functions (that would impact on a ships performance in battle) that don't seem to be fully implemented either.

But there is a slight flaw with it that isn't to do with the game being buggy, rather a fundamental design choice that was also another 'major' change. Going with the 'Less is More' principle this time around, Kerberos decreased the maximum number of systems in any given map, but increased the amount of planets and objects within those systems, making them more true to reality. As such, battles take place in an entire system now, with the sun, planetary bodies, asteroid fields and whatever else is present all being there at once. The problem is that the ships move too slowly in order to traverse the whole space in one 'round', even if you set things so that you have the full 12 minutes available.

It's not so much of an issue for the smaller engagements, like for instance at the start of a game, but for larger battles, system with a lot in them, or certain random encounters that spawn mobs around each planet within a system, the new set-up basically means you're set to fighting one round per turn until either you or them are wiped out. On balance, (considering you can't pause real-time engagements), this stops you from getting drawn into anything too time-consuming, but it also kind of defeats the point of having a whole system to play with in the first place. But there is an extra strategic layer in place in the form of sectors that you can control. In-between rounds you can access the Defence Manager (which we think is being renamed the Battle Manager because it works both in offensive and defensive actions) to place your ships in sectors under your control. We guess the point of the strung out engagements is to slowly take ground form the enemy, and out-manoeuvre your opponents using the sectors.

This just brings us to another problem that the game has however, which is the lack of tool-tips and information to highlight these things. With the state that the code is in as well, the situation is merely exacerbated because it's hard to tell whether features are missing, or there's just something you need to figure out in order to get them to work. For example, the 'Trade' layer, which is similar to the trade sectors of the previous game, wasn't present until a couple of patches ago - however, there's still no obvious indication as to how they actually work, and how you service them (digging into the encyclopaedia and looking online helps, but it really shouldn't need to come to that).

Stepping away from the issues SOTS2 faces, let's focus back on what the game plays like right now. In a typical match, you'll start off with a home planet and a handful of systems (to represent an arbitrary passage of time since the first game), and like the original you simply have to expand out into the game world explore, make friends and/or conquer. Setting up a game is highly customizable still, so you can chose what the map looks like, what races will be present, names and colours, certain management sliders and even how many random encounters and menaces there will be. There are supposed to be more lore/story-based scenarios to choose from as well, with custom objectives (what passes for a story mode in SOTS2), but as of writing none of them have been included in the game yet.

Early match will see you mainly searching, expanding and researching tech. Ships are now organised into more formal 'fleets' now, which have to have a command ship and an admiral (in the last game you could just group ships together as and how you pleased, and a command ship wasn't mandatory, but recommended). Fleets also have to be based at a Naval Base (one of many orbital structures you can build), and have a maximum area of operations based on Supply and the support range of the home base. Instead of just sending a fleet somewhere and performing contextual actions, you have to assign missions, which restricts flexibility of fleets. Unless they are based in a system, they can't simply sit there, so you would have to send a fleet on a 'Patrol' mission if you're worried about invasion. Similarly, things like Colonisation, Attacks and Invasions... they are all missions that can be assigned.

In terms of the more management aspects, there's more feedback and interaction in terms of budgets, and how much money is spent where and what for. Sliders galore! Groups of planets can also be grouped into provinces, which we heard about at preview stage although their actual impact has yet to be determined, and as far as research goes it's much the same as the last game, except technology has moved on, and you now have to conduct 'Feasibility Studies' for any techs that are available to you, but not something your empire would be naturally pre-disposed to researching. There has also been a change to the design portion of the game, whereby you can now enter a limited version of the RTS-screen and conduct 'weapons tests', and the first of each new design is considered a prototype. At the moment though, there could be more feedback as to what everything actually does and what the pros and cons are, and the prototypes are almost prohibitively expensive.

Perhaps calling the game 'dire' is a bit harsh, perhaps not - as we've said, it IS playable. It's also sluggish, half-finished, it still crashes from time to time, and overall, it's just kind of uninspiring right now. CEO and front man Martin Cirulis himself said the game was just a pile of "shot up code". No matter how humble or apologetic they are, we suspect they knew full well what the game was going to turn out like, and decided not to tell anyone. Or they didn't, which in a way is even worse. Paradox knew as well, but after physically talking to some of them, you get the impression those guys are trying to take the bullets, or jump on the grenade.


History tells us that, eventually, Sword of the Stars II is going to be great - possibly even amazing. Play the original game now and you'll find it a wonderful sci-fi strategy romp... although legend tells us that it's own release wasn't fantastic either. At the moment, SOTS2 is playable, but not really enjoyable - some tech-trees aren't fully implemented, features are incomplete or turned off (we don't anything is out-right missing but... at the moment, it's really hard to tell) and it's just a little bit boring right now. If you want to show Paradox and Kerberos your support, then by all means go buy it, but regardless of whether you pick it up now or not, it'll probably take a couple of months of patches to be the game it was meant to be.

The new engine makes space battles all the more engaging, and when all of the features are working properly, they will easily be the best bit of the game.

Sword of the Stars II Essentials 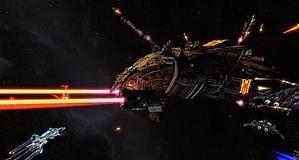