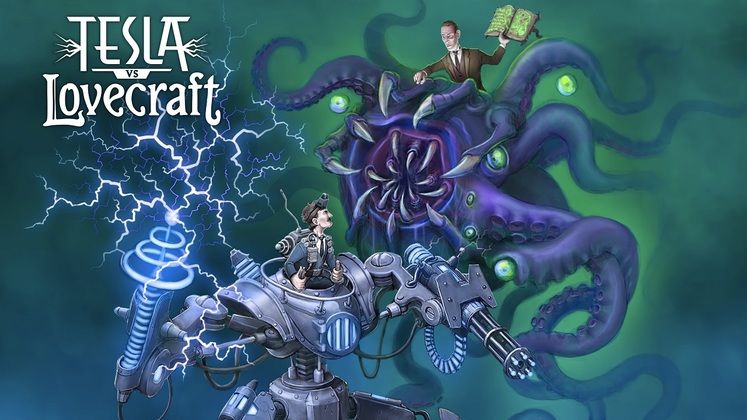 Tesla vs Lovecraft is that particular breed of game which is utterly silly, and benefits from it. The game’s name should be pretty good indication of what you’re getting into - when Nikola Tesla is just about to provide free, unlimited wireless energy to everyone, fiction writer H. P. Lovecraft, known most widely for the Cthulu mythos, interrupts him by calling eldritch demons into the world with the Necronomicon. Tesla leaps into action, using a mech and teleportation backpack among other things, to clean up the mess. Yeah.

While other games might try to ride on the silly premise alone with paper-thin gameplay, Tesla vs Lovecraft only ramps things up once you’re in control. There isn’t any actual story beyond what I outlined above, and even that only exists to provide an excuse for Tesla’s fictional superhero version to wipe out hordes Lovecraftian horrors - not that this is a bad thing, as an attempt to pump more narrative into a crazy premise like this would almost certainly backfire.

Levels are bite-sized chunks of the fictional town of Arkham, which often appeared in Lovecraft’s work, mixed with a few realistic elements, such as Tesla’s Wardenclyffe facility. Each level can be completed in around 2-3 minutes, sometimes less, with only the boss battles lasting marginally longer. They are entirely self-contained, and this is a game you can just jump in to play for a few minutes whenever the time crops up. In an industry dominated by huge AAA titles with vast open worlds demanding around 100 hours to experience, this is actually quite refreshing. 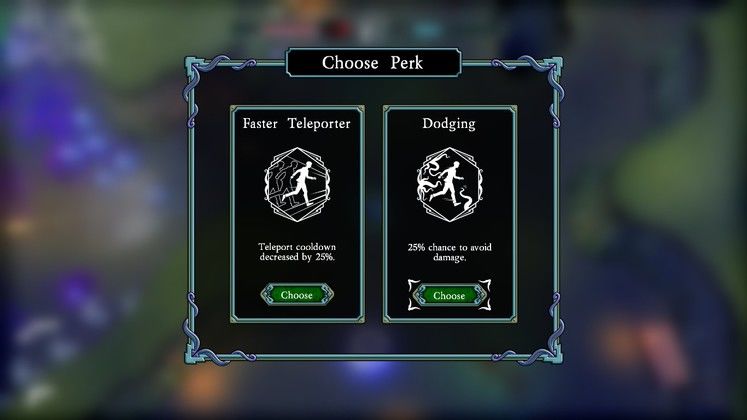 As a twin stick shooter, Tesla vs Lovecraft has all the staples of the genre - flashy, colourful effects denoting different weapons, large hordes of bullet-fodder enemies and frantic running around. The basics are extremely simple, but different mechanics have been well layered upon one another to give gameplay depth. Players can purchase permanent upgrades between missions, such as adding extra charges to abilities or extra time to the mech. Each mission is started with Tesla at level 1, with a basic handgun (save for the first few seconds of mech) and no abilities or perks. As you kill off hordes of enemies, you’ll start leveling up which lets you pick perks that last till the end of the level, such as a constant AoE radiation field around you, or an extra barrel on your guns, giving the game a slight bullet-hell feel. You’ll also pick up better weapons that spawn randomly and are sequentially unlocked as you progress through the stages. These grow progressively more and more fantastical, evolving from regular shotguns and revolver to railguns and electric gauss shotguns.

Also spawning randomly are special abilities. These each have a set number of charges, and light up the battlefield with even more flashy laser effects. These vary wildly, including circular explosions, large holographic swords slashing at enemies in range, or the summoning of huge anvils (somehow?) which crush your opponents. Joining these abilities are timed pickups, which also have some nice variety - fire bullets, double XP and so on. You also find pieces of your mech scattered across the map. When you collect five, you can activate it for a limited time. While in the mech, Tesla’s health doesn’t decrease if you’re hit, but damage taken does reduce the timer on the mech. Upon it being destroyed, you need to collect the pieces again. 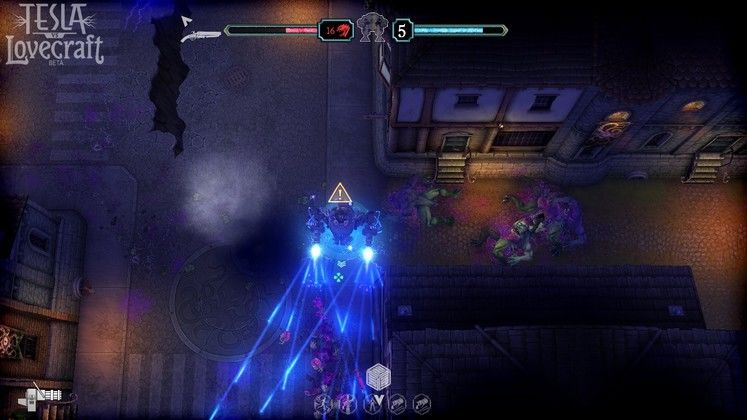 The yellow triangle with ! indicates when you mech is about to break down

Combining all of these elements leads to frantic, constantly evolving gameplay, though usually most levels are too short for many elements to come together. Certain harder levels, and boss fights particularly, allow the game mechanics to shine. When the screen is filled with enemies and Tesla is already beyond level 10 packing a bunch of combat-altering perks, battles really come into their own. That’s not to say that the shorter levels aren’t fun - they still provide more than enough challenge and opponents. The whole game has a rapidity to it, which thankfully also translates to the ultra-brief loading screens, which would be stressful in most other situations, but is more akin to exhilarating here. Tesla vs Lovecraft is fun condensed into pills, basically.

Of course, an important element of gameplay here is the enemies, since if you always shoot all the same mooks even abilities and weapons will start feeling drab. Tesla vs Lovecraft’s bestiary isn’t too long, but it provides well balanced variety and plenty of Lovecraft references, including the terrifying Shoggoth. The game’s artstyle prevents any of them from being anywhere near scary - in fact, the Spawn of Dagon look kinda cute in a funky way - but the visual cues are there, tentacles and all.

As you progress through the game, you’ll enter new planes of reality. These functionally don’t change much beyond throwing one new mechanic each into the fold while applying a shoddy Instagram filter to the screen, but reuse the basic progression of the game each time, which feels a tad like padding. I won’t swear that every map is recycled twice across the Ethereal and Eldritch planes, but some definitely are. Had the plane mechanics been added organically, and only the normal plane kept in the game with more maps, it might have been less of a repetitive experience. Overall, this doesn’t detract much from this otherwise fantastic game, but it’s a bothersome “what could have been” issue. 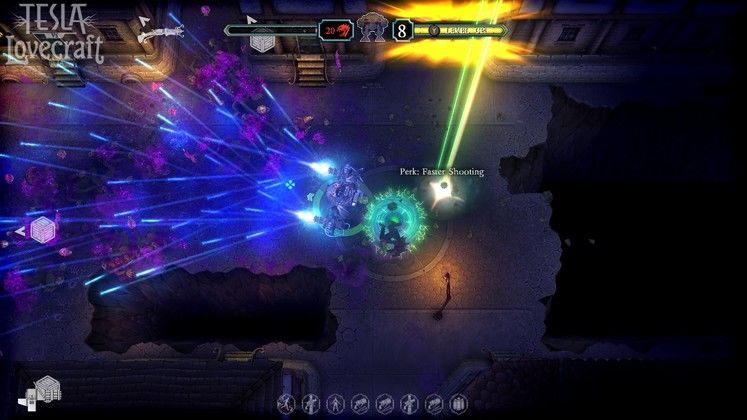 The game carries some bullet-hell DNA

Oh, and the game has an absolutely bangin’ soundtrack. I hope the composer turns up in more titles going forward!

Tesla vs Lovecraft is stupid fun, reveling in nonsense and bullets. The rapid, frantic gameplay delivered in snackable portions underscored by a fantastic soundtrack makes for a hugely entertaining experience, even if it gets a tad repetitive after a while. We’d say blasting Lovecraftian horrors as Tesla piloting a mech was never this fun, but then it wasn’t ever done before.

During the final bossfight of the first plane, a level which was particularly long compared to the others (read: 5-6 minutes), as I was nearing the end the screen was completely flooded with enemies and Tesla was packing 20+ perks, including plenty staked extra barrel perks. Activating the mech then and mowing through an endless tide of Shoggoth was epic in a way not even Hollywood could top.