In space, no one can hear a dice roll

There’s nothing quite like Tharsis, at least in the videogame space. By mixing board game mechanics with challenging, roguelike gameplay, Tharsis makes for a truly original strategy game, one that - if you let it - will have you coming back for more time and time again.

Despite the intricate systems involved, however, it’s a fairly simple concept to grasp. Set aboard a spaceship as you and your crew undertake the first manned journey to Mars - at least, before disaster strikes. After taking considerable damage to the ship and losing two members of the crew, your new goal is to survive the remaining weeks until you reach the Red Planet.

And you do so with dice. 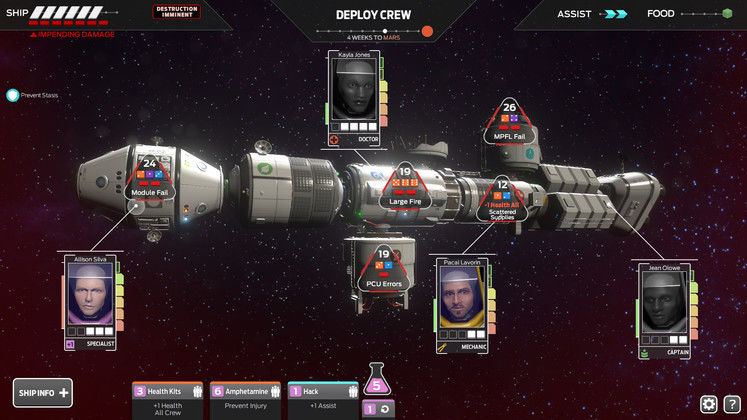 This is, in essence, a strategy game and yet while a single turn will require all the resource, movement and unit management you might expect from the genre, your decisions are decided entirely with the luck (or lack of) a dice roll.

Each of your four surviving crew members come with a set of dice rolls per turn, a sort of metaphor for that particular person’s level of hunger. Every new turn comes with randomly generated events, which can damage your ship’s integrity, injure your crew, affect their available number of dice rolls or hinder the ship’s functionality in some way.

You must decide where to best utilise your team - whose individual classes can provide additional benefits - to eliminate these dangerous events, secure enough food to replenish dice rolls and, if chance is on your side, make use of the different sections of your ship to bolster your odds of success.

It’s a fascinating system that doesn’t take long at all to understand, yet all the same requires a number of playthroughs before your own personal strategy begins to flourish. Maybe you’ll favour food growth to maintain a higher number of dice rolls, or perhaps you’ll try to boost your ship’s overall damage to help it weather the cosmic storm. It’s surprisingly deep enough to offer that sense of personal variety.

But it’s also a pretty challenging game, too. While defeating the game doesn’t actually take all that long itself, it’ll require a number of attempts before you’ll finally uncover the mystery of Tharsis.

The lack of variety between turns means that it’s hard for Tharsis to maintain interest over longer sessions, and whether you’ll get much longevity out of it all comes down to your existing preference for strategic thinking.

The randomised events means you’ll need to work hard to make the most of crew, and that sense of tactical decision making is prevalent throughout. Each turn offers a careful, considered decision process, but even that may have to change on the fly should you not get the dice rolls you were counting on. 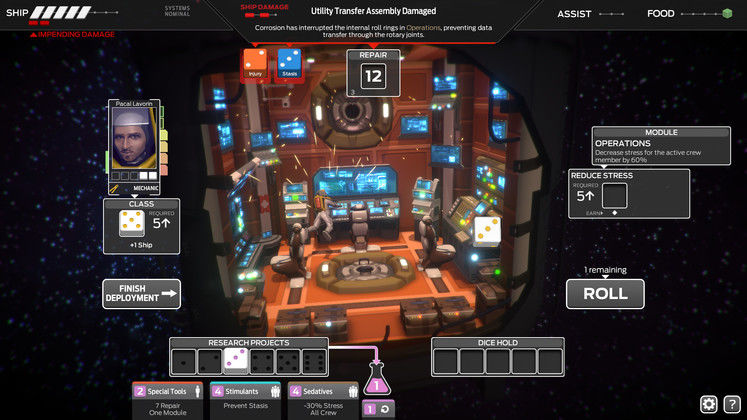 Additionally, each area of the ship can be ‘activated’ to provide a special bonus - from healing the current team-mate to repair ship damage

Events can only be cleared once enough dice have been expended to pay its cost; say it’ll take 24 to clear away a fire, for example, then you’ll need to pay the necessary die for success. Four sixes might do it, sure, but good luck to you if you’re banking on that coming up.

It’s a mathematical game of calculated risk, then, but that your success is restricted to the numbers of a dice roll can feel a little frustrating in much the same way that even the best Hearthstone decks can be destroyed by a series of unfortunate draws. When it all pays off, of course, you feel like a king, but losing a playthrough after a string of smart decisions simply because your luck was dwindling leaves an underlying bitterness that continues to build.

Events become increasingly difficult to clear - which should be expected - but towards the end it becomes unlikely that you’ll be able to remove every threat you might face, and while the strategy here then turns into a case of collateral reduction often you’re faced with impossible odds. It’s not that Tharsis is too difficult or even unfair, just that it can feel as though you lost through the game’s random elements, rather than anything under your control.

As is the case with a lot of games that rely heavily on chance, this means achievements and failures alike are dulled to insignificance - there’s no glory in a lucky victory, no shame in an unlucky defeat.

Despite all this there is a lot of strategy to saviour and, though it might be something of a copout to state it, fans of the genre will have something to get into. There are unlockable characters - most of which are via cumulative actions, regardless of how successful your mission to Mars is - and a handful of different endings, too, so there’s something to work towards if you are more forgiving about the brutal reliance on luck.

In our recent interview, Tharsis developer Mike Roush used solitaire as an analogy to describe the game, and that’s perhaps the best way of approaching the title: it’s not always about winning - and in fact that may well be an impossibility for any given playthrough - but instead about the moment-to-moment play. To some that’ll be all they need, but to many more Tharsis will frustrate rather than thrill. 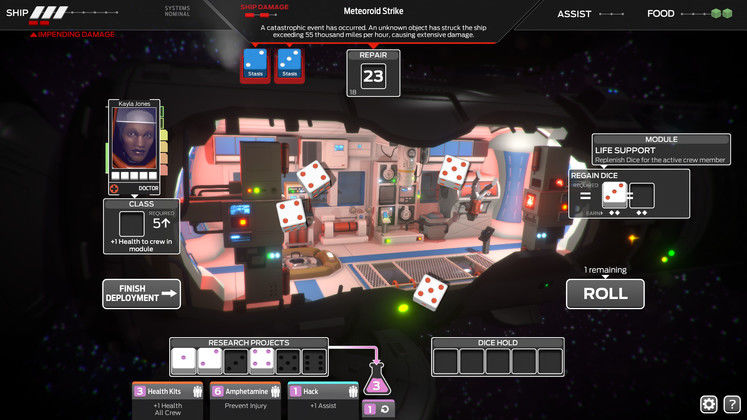 The more food you have, the higher chance of success against high-numbered events you’ll have. You can cannibalise human bodies to feed the crew

Tharsis is honest about its randomness, however; think of it as a single-player board game that - as with anything reliant on the roll of a dice - can only offer success through sheer luck. Perhaps it veers a little heavily onto the wrong side of chance, but in doing so it only makes the reward more tantalising for those who have the determination to overcome that challenge.

It’s not a game for everyone, but if you’ve enjoyed the likes of Warhammer’s Talisman or, heck, even Yahtzee, then Tharsis at least has something new and different worth experiencing. Just be prepared to suffer.

For those looking for something unique and original, Tharsis definitely offers that up in spades. It’s not a game that can be played for hours on end, but you’ll certainly return to it time and again should you fall for its clever blend of roguelike and strategy board games.

Rolling a trio of sixes when the survival of the crew relied on it the most while managing to avoid any hazards that might’ve killed off our Captain. 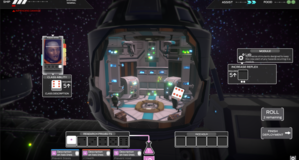