The Blackwell adventure series concludes on a high note

One of the greatest treasures of being a games reviewer is that now and again I get a total surprise. A game I had basically no knowledge of lands on my doorstep (metaphorically), I play it not expecting much and instead discover an absolute gem. Since I'm pretty knowledgeable about most games it's only properly happened to me twice in my gaming career: first for amazing DS puzzle-platformer Henry Hatsworth, and second for indie adventure The Blackwell Deception. I knew nothing about WadjetEye Games or the Blackwell series and yet ended up calling it "one of the best adventures I've played in years". It's still the best adventure game I've played since LucasArts closed. And now the last ever Blackwell game, The Blackwell Epiphany, is finally here. Short version: it's great. Long version: read on.

It's some time after the events of Deception. After stopping Gavin and his vampire-like ability to feed on souls, psychic detective Rosa Blackwell and her ghost partner Joey Mallone have continued helping lost souls to move over, now with the aid of Sam Duarte in the NYPD. After helping out a lost girl ghost in a run-down apartment building they witness a man named George Ostin get gunned down in the street, and worse they see his soul get torn apart. They're the only ones who can stop this happening to anyone else, but first they have to find out why it happened at all.


I'm not going to spoil any more, but the story of Blackwell Epiphany really is excellent. It goes to a lot of unexpected places, weaves in interesting twists and manages to wrap up several of the series' lingering plot threads satisfactorily. It even builds to a big apocalyptic finale with the fate of New York in the balance, with a logical reason why Rosa and Joey are the only two who can stop it. However it's the smaller, more personal stories that make Epiphany (and Deception) so appealing, from the tales of the various tragedies that the pair help resolve (Kendra Haskins, sob) to the companionship between Rosa and Joey that forms the heart of the series and keeps it beating strong. Plus despite all the sorrow and the problems they encounter they both continue to joke with each other, keeping a sense of humour running through the whole thing. The characters (living or dead) all feel real and believable, with very human problems, hopes and failings, but it's Rosa and Joey that keep the story compelling. Also, considering how low-budget the game is the voice actors do a fantastic job bringing these characters to life.

A superb story with great, believable characters is a fine start, but of course with an adventure game the puzzles need to be good too. This was Deception's arguably biggest success: keeping sensible, logical puzzles that were satisfying to solve and felt very modern. Fortunately Epiphany keeps this up. Some adventuring purists might argue that the puzzles are a little easy, certainly they're more straightforward than Daedalic would come up with, but they definitely required brainpower on my part. What makes them seem easy is that they make sense. Need to find out what theatre group this young dead actress was part of? You've got a phone, Google it! Need to find an address for someone but you just have a phone number? You're friends with a cop now, get him to trace it. See? Sensible.


Things can get tricky, and occasionally your investigations hit a dead end, but there's no randomly using inventory items on everything. You can't combine inventory items and you rarely have more than four things at any time - and often one will just be a key. Puzzles are usually solved three ways - with your phone, with Joey's ability to blow on things, and with information. Joey as a ghost can explore undeterred and talk with other ghosts, whereas Rosa keeps notes of everything important to the case in her phone. The only inventory-combining in the game is actually combining notes to see if they fit together, in a manner similar to the underrated Discworld Noir. Even better WadjetEye actually removes any notes, items or locations when they're no longer useful, so if something is available you know it's still relevant. If you're still stuck Joey and Rosa can ask each other for hints on what to do next. Epiphany gives a challenge but removes all the pointless tedium that can clog the player's enjoyment (see Moebius: Empire Rising). A very modern adventure, as I said.

Perhaps the surprise for a lot of people, if this is their first WadjetEye adventure, will be the graphics. May I use this moment to say - please don't make this your first WadjetEye game? You don't have to play the entire Blackwell series but at the very least pick up Deception. Epiphany is fully intended to be the last part of a series, so if you don't play the rest it's like watching a show's Season Finale and none of the other episodes. Anyway, yes, graphics. Pixel art. I'm sure the fact that Epiphany looks slightly better than The Dig but slightly worse than Full Throttle (both 1995) may put people off, especially if they've been spoiled by Daedalic's gorgeous 2D adventures. Nonetheless the pixelly style is timeless and still manages to convey everything the story needs, plus remember the majority of the game is made by one guy named Dave Gilbert so this low-budget look is a necessity as much as a style. I'm fine with it.

Is there anything I disliked about Blackwell Epiphany? Literally only a couple of really minor things. Firstly the hint system occasionally fails, either through telling me to do something I've already done or offering terribly bland advice like "look around more". Most of the time however it adjusts to what you're doing perfectly and gives sensible, helpful nudges. Secondly the end of Deception made it sound like Rosa was dead-set about going after the soul-vampire group behind things, but they never really appear in Epiphany leaving that thread open. Oh well, you can still argue that the antagonist here was the actual power behind these vampires so they weren't really needed. Man, only two tiny complaints and I talked myself out of both of them. Sigh.

The only real criticism of The Blackwell Epiphany that can be made is that it’s entirely like Deception. It looks a little better but still the 1995-era pixel style, the sensible puzzle mechanics are the same, the story and characters are just as strong, and it feels the same. Unfortunately as a complaint that doesn’t really work, as I’m simply saying it’s equally as great as the best adventure game in the last few years. Epiphany has an intriguing and well-written story packed with numerous interesting subplots, wonderful and believable characters that are well acted, cool pixel graphics that I kind of wish Broken Age had gone with, and entertaining puzzles whose solutions make sense. After the utter trainwreck of Moebius this was exactly what I needed, a proper well-told adventure from a developer who actually knew what they were doing. The Blackwell Epiphany is a fantastic and poignant end to the series, and I really hope we can start mentioning Dave Gilbert in the same breath as adventure gaming luminaries like Tim Schafer, Charles Cecil and (sigh) Jane Jensen. And you know what? I think he could out-adventure all of them.

The ending or the twist certainly, but un-spoilery I’ll put forward the tale of a little girl called Kendra Haskins. Poor kid. 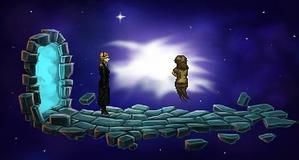