The Chronicles of Riddick: Escape from Butcher Bay - Developer's Cut

You play a role of musculature psychotic guy called Riddick, which is the actual representation of Vin Diesel from the movie, with a muscle or two more

The Chronicles of Riddick: Escape from Butcher Bay drains its thematic from a science fiction movie, Pitch Black. You play a role of musculature psychotic guy called Riddick, which is the actual representation of Vin Diesel from the movie, with a muscle or two more. Your goal is to escape from an isolated and highly secured prison Butcher Bay. Murders and scams are the usual every day occurrences in Butcher Bay and it seems like a perfect place for Riddick. Your game begins at its gates. 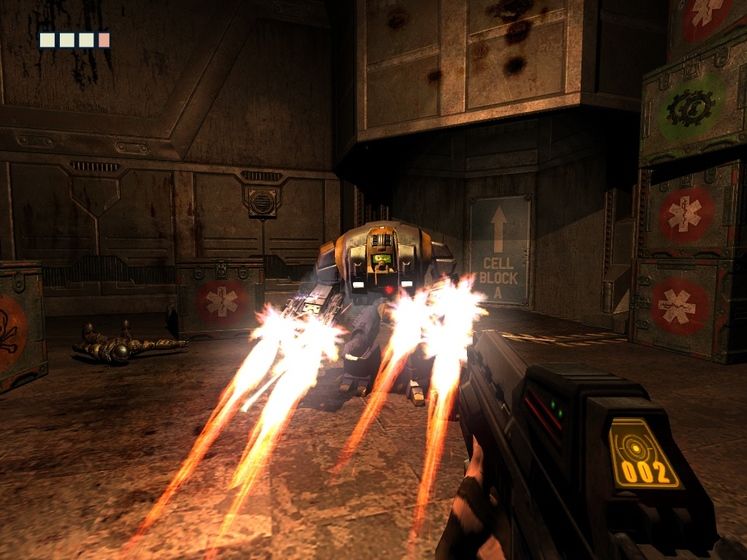 The game can be considered as original and innovative, and it can stand out from the FPS games crowded market we are all used to. It has the elements of RPG and Adventure so you will not only shoot but actually talk with other characters (though mostly just symbolic) and complete various missions along the way. You will sort out inmate’s debts, poison their food or beat them up and become a ring champion of Buther Bay prison, earning respect of them all. There are various missions and the most of them are not necessary for finishing the game.

The campaign has been worked out in details so you will, mostly, know where you need to go without too much roaming around. It’s not short. It’s noticeable that the developers made every effort in making the game smooth and rolling in its every aspect, compensating the complete lack of multiplayer. Yes, no multiplayer in this one. So the main scope of the game is in its single player and I don’t have any serious complaints there. The game is thoroughly interesting to play and you will be deeply caught in your role as cold blooded Riddick. The problem with me is that I fill my pants easily in dark FPS games. Let’s mention Doom 3 here. It scared the ... out of me. I was completely hysterical and I wanted to leave the keyboard and mouse and the entire damn thing and get the hell out of there when a creature charged upon me when I didn’t wanted it. In Riddick you have a wise versa situation. Here, you are the one that is in the dark. Riddiks specialties are stealth and silent kills. He acts the best when covered by dark and under shadow of the dark corners. Surprisingly I was able to get into such a roll. The game is just that good. What I liked the most is that while in the most FPS games you will just be pilling up weaponry in your pockets from beginning till the end, in Riddick you will often be left out bare handed. Don’t have any weapons? Not a problem. You can crack necks silently and arm yourself. But often you won’t be able to use your victims weapons as some of them are gene secured. So you will have to use your hands and act cautiously till you find something you can use to make the kill from afar. 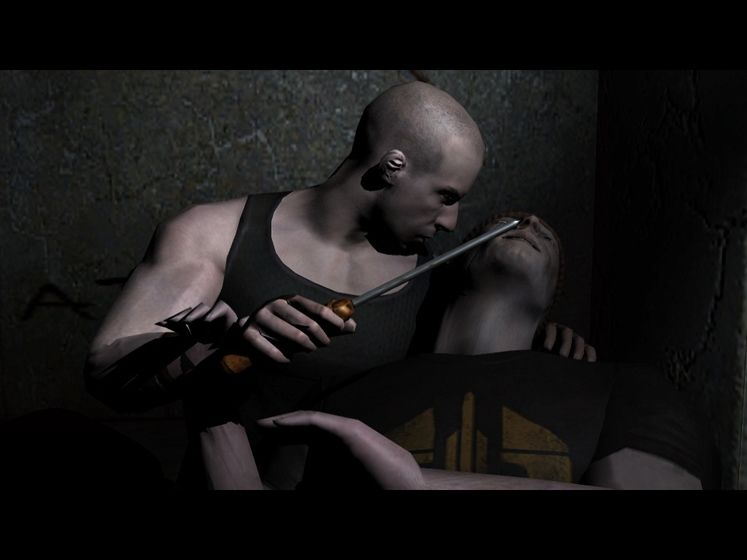 There aren’t only normal hand weapons in the game. You will have several opportunities of getting into armoured beasts such as Riot Guards and ground shaking Heavy Guards. When inside one of these beasts, you will have a total control over your kills. There is nothing better then walking through a corridor inside a Heavy Guard and hearing the screams of incoming attackers when you come into their view. When walking, the floor below you will crack under the weight and parts of it will fly around you as you advance ahead. Your entire screen will roll from left to right giving you the feeling that you are riding an actual beast. You will feel very powerful (caution: very disappointing when you look yourself in the mirror after it). So you have a broad of satisfying emotions invoked throughout the game.

Graphically, CoR is in the similar sphere as the recent Half Life 2. I presume that the most of you reading this have played Half Life 2 already. Good game also. So, anyway, every detail, every scratch describes the age and the place exactly as it is supposed to be. You can just imagine it as reality. Mentioning reality, there are some underground creatures that will appear in the later stage of the game, adding the fantasy element to the gameplay. 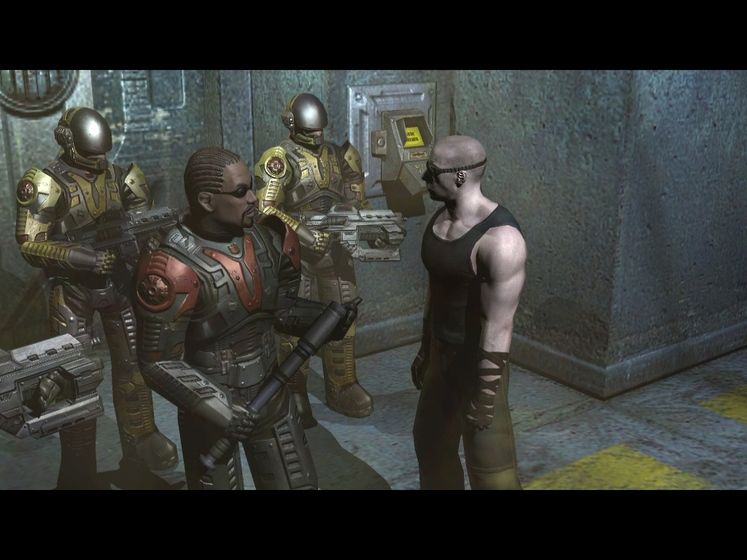 As an additional touch, you will be collecting special items throughout the game (mostly packs of smokes) unlocking then some of the developer’s diaries and notes in the main game menu. There’ll be sketches of game characters, weapons and building complexes that were supposed to be included in the game but didn’t. Sort of refused designs by the game artists. Neat touch.

The game isn’t too difficult to master and the most of the opponents will die easily. Earlier mentioned Riot and Heavy Guards won’t be only for you to control, but also your enemies. But there are ways to kill them and they will fall if under enough fire. Riot Guards are heavy beasts. But they are so heavy that if you are in the open field fight with them and end up behind them, they won’t be able to turn to face you due to their slowness. Does it sound like a bug? No way. It’s just how it is supposed to be and it is really satisfying butchering them like a chicken in the back. From some, after falling down you will be able to pick mini (big) gun. You will walk like a snail but if you get anywhere near your kills with it, they will be wiped easily. You can also of course choose several difficulty levels, adjusting the game to your experience. 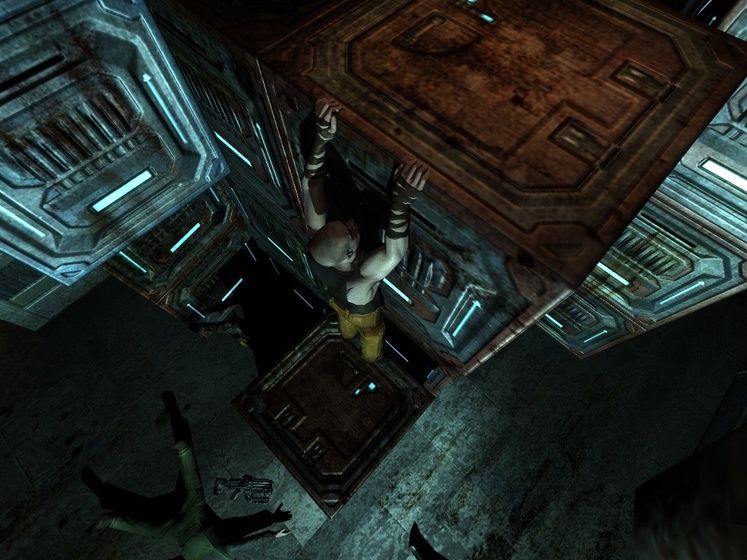 CoR glows with originality. In certain parts of the game you will get new abilities. Such as seeing in the dark. When you get it, the dark becomes your ally and Riddick gets to enjoy the dark even more. There are arcade, adventure and shooting parts in CoR. So you will be jumping over obstacles, sliding on pipes above ruins, making stealth kills and much more. When fighting with cold weapons you will be able to make various combinations of hits that will actually be important. So its not like we are used to just stand and click till your fingers go numb, but Riddick will fight in a more realistic fashion.

The only minor setback apart from the lack of multiplayer is that there aren’t too many different enemies and weapons in CoR. You will mostly be killing the prison guards. But it’s really almost not worth mentioning as all the characters and weapons that appear are truly rich and detailed. Nothing really has any value when standing against such a warm and inspirational game. If I ever wrote any review to help anybody decide to buy any game or not then I hope this review will make you walk to the shop and make the purchase. 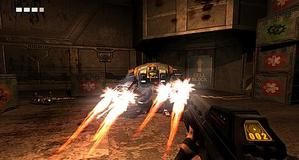