Spoiler: The Evil Within is us!

Despite having zombies that are really villagers that have been taken over by some evil force, freakish monsters that have to be avoided as much as shot, an uncomfortable third-person over-the-shoulder viewpoint, a powerful chainsaw-wielding masked psychopath, dodgy voice acting, spooky abandoned buildings, Shinji Mikami directing and having the word “Evil” in the title, this isn’t a Resident Evil game. In fact if I was going to sum up The Evil Within it’s exactly half-and-half Resident Evil 4 and Silent Hill, with maybe a dash of Alien Isolation’s “hiding under beds and in lockers” schtick. Can I leave the review there? No? Fine, more words then.

I’ll keep the plot to a minimum since things get crazy fast and I don’t want to spoil any of it. Playing detective Sebastian Castellanos, you’re sent to investigate a series of horrible murders at a mental hospital along with your two partners. After being attacked by a mysterious scarred man in a white hooded top Sebastian soon finds himself fighting for his life against zombies, monsters, spectres and that aforementioned guy with the chainsaw. The story and writing is… okay, I guess. It’s not going to win awards, but it’ll keep your interest in a cheesy horror movie way - meaning of course you won’t give a s*** as you’re there for the scares not the plot. 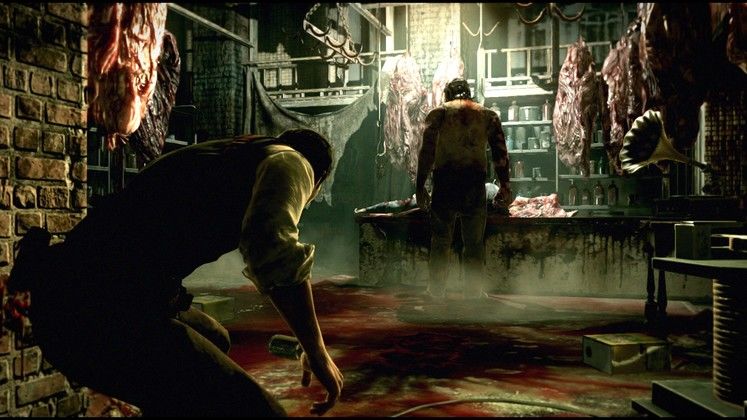 Sam Fisher would eat this guy for breakfast

The world of The Evil Within though is utterly deranged, in a good creepy way. The Silent Hill half of the equation means that anything can happen at any time and developer Tango Gameworks are clearly f***ing with you at every point. You could be walking through a scary village, open a door and BAM you’re suddenly in a slaughterhouse being chased by one of HR Giger’s cheese-binge nightmares. The downside of this is that there is no coherence or natural progression in the levels the way you’d find in Dead Space or Resident Evil. Areas vaguely feed into each other but never perfectly, and it made me feel like I was just playing a bunch of independently designed levels rather than exploring a world. Evil Within just about gets away with being so disjointed because it ties in with the theme of how crazy everything is, but the satisfaction of knowing that you’re constantly pushing forward is lost. Tell me in the comments if I’m talking complete and utter drivel, but I like that feeling and I’m sad Evil Within doesn’t have it - consequently when I reached the end I didn’t feel like I’d completed a journey, just finished another stage.

Perhaps the big surprise, that’ll come as a relief to fans who believe that the series has forgotten its horror roots, is that Evil Within isn’t quite as trigger-happy as recent Resident Evil games. In the beginning of the game you barely get any weapons at all, leaving you to rely on stealth, traps, and even hiding under the bed like a big sissy-pants. After collecting more weapons and jars of green Brain Juice that you electrically shock into your head back in the hospital waiting room hub, which you enter through glowing mirrors in order to upgrade your abilities (SERIOUSLY) you eventually start getting to the point where you can rely on guns more and more. The game falters a bit here as it heads more into straight Resident Evil 4-6 action territory, with more weapons and more adequate supplies of ammo, even to the point where you can defeat most “boss” monsters by just running around and shooting them. I greatly preferred the earlier tension-filled levels where it felt like I was actually carefully hunting and thinking tactically rather than just looking for a headshot with my sniper rifle. 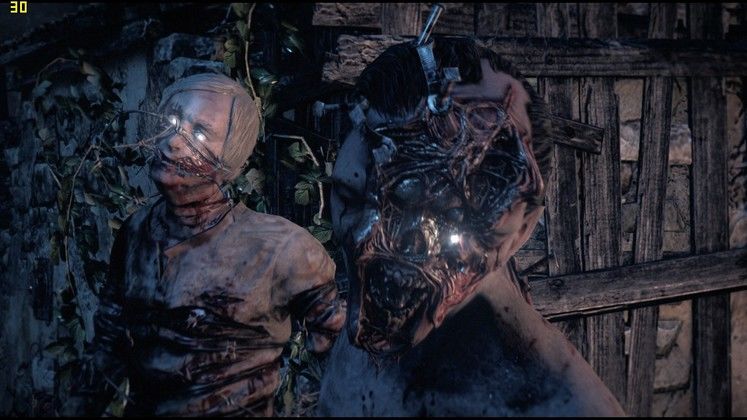 That all said, Evil Within remains mostly fun all the way through and consistently interesting. The joy of discovering what new madness or terror awaits continually pushes you on, and Tango Gameworks always delivers. I loved Alien Isolation but even that felt padded in parts whereas Evil Within felt consistently surprising and I was never bored. Well, apart from facing the same spider-lady boss again and having to defeat her the same way each time. Even better there’s good replay value too since there are a lot of secrets hidden around every area, such as special keys inside “goddess” statues that unlock lockers full of useful stuff back at the hospital hub. There’s apparently even branching paths in certain sections, presumably in places where you either defeated a monster or ran for it. I like exploring in games, and I love being rewarded for doing so.

The big question of course is “is it scary?”. Depends on what you think qualifies. If you want jump-scares and surprising shocks then no, The Evil Within has a couple but mostly none. It’s creepy, it’s suspenseful, it’s disturbing, but you’ll always see the monster coming that kills you. There’ll never be a moment where you jump out of your seat (well, okay, one) and your nerves will rarely be on edge. Then again I’d say all that about Dead Space and people still call that game scary. I still loved Dead Space for being freaky and disturbing though, and I’m fine with Evil Within doing the same instead of making me scream all the time. 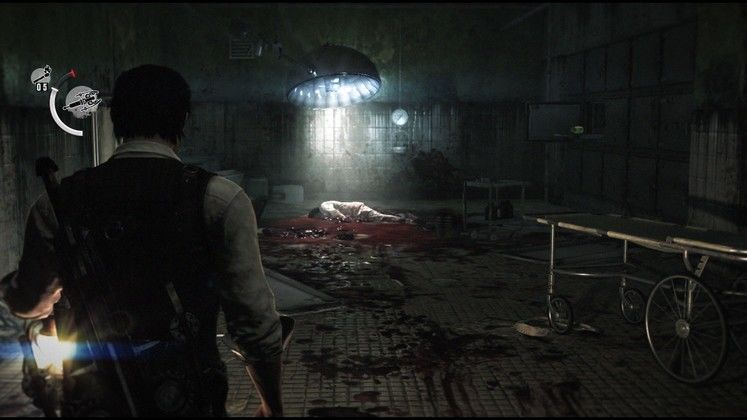 This isn't going to end well, is it?

So that’s Evil Within, but unfortunately as this is the PC version I can’t just stop there. This isn’t one of the worst console ports ever (Dark Souls is a far bigger offender) but it’s still pretty damn insulting. Considering Tango Gameworks had the id Tech 5 engine at their disposal, which is designed around 60 frames-per-second, it’s impressively bad that the PC version of Evil Within is actually locked to 30 FPS. You can use the console to unlock this, but 60 FPS at 1080p resolution requires a monster PC to run. Then we have the other technical problems, like “widescreen” black bars obscuring the screen, classic id Tech 5 texture pop-in, and frankly rather shoddy collision detection in the vital area of shooting enemies. At one point I shot a harpoon at an enemy and it went right through him, and I don’t mean it impaled him (which is what I wanted). Yes a fair few of these should get patched out, but right now you’ll have to mess about with Steam launch options if you want a decent experience on PC. Hint: put in “+com_skipIntroVideo 1 +r_forceaspectratio 1.8”.

THE EVIL WITHIN VERDICT

Now The Evil Within is a good game, even if it feels a little old-fashioned with its claustrophobic over-the-shoulder camera that artificially makes it difficult for you to see enemies. It remains endlessly surprising and inventive from beginning until end, it rewards exploration, and apart from some moments of frustration (probably caused by the camera) it stayed fun all the way through for 14-19 hours of gameplay. However the technical problems, poor storytelling (welcome back to the ’90s folks!), lack of satisfying level progression and the gradual ditching of stealth in favour of shooting drags it down. Some people will hate it completely, but I’m not one of those. If you like the idea of Resident Evil 4 crossed half-and-half with Silent Hill then The Evil Within is the game for you. Just be prepared to put up with 30 FPS.

Top Game Moment: Meeting Spider-Girl for the first time. Or that rat with a statue on its back.