More of the same Adventures of Van Helsing 3 just doesn’t have the same ring does it?

The conclusion to the Diablo-like Van Helsing trilogy is more of the same killing and snarky tat-for-tat exchanges like the previous games but with a much wider range of classes than ever before. Unfortunately, there’s barely any iteration in The Amazing Adventures of Van Helsing 3 with skills reduced and a level cap at 30, not to mention the confusing UI that will put newcomers off. Yet the core gameplay, loot gathering and narrative is still incredibly satisfying doing just enough to pull the demon hunter ARPG off the floor.

The Incredible Adventures of Van Helsing 3

More of the same Adventures of Van Helsing 3 just doesn’t have the same ring does it?

The opening of the game sees you hot on the trail of the mysterious Prisoner Seven as the city of Borgovia struggles to recover from the civil war. That isn’t helped by a strange cult prophesying ‘The End’. Sadly not a Doors tribute band but instead rather violent head cases intent on causing more dark destruction. The story is simple but surprisingly ok, better told through the banter of Abraham Van Helsing and Lady Katarina as in the previous entries.

There are now six classes available from the start. Protector - your basic tank with heavy armour, shield and sword using exclusively melee attacks. Elementalist - the spellcaster using the four elements to wield destruction. Umbralist - the rogue class able to stealth enemies and also a spellcaster. Phlogistoneer - not as I thought the expert of spitting in an enemies face but a hulking great mech suite and a master of ‘weird science’. This is the heavy weapons guy with rockets, bombs and a flamethrower to be used. Constructor - an engineer able to build and deploy gun platforms or mobile drone weapons. And finally the Bounty Hunter, which kind of pales into the background after describing those other classes as this is the tradition Van Helsing ranged combat class. 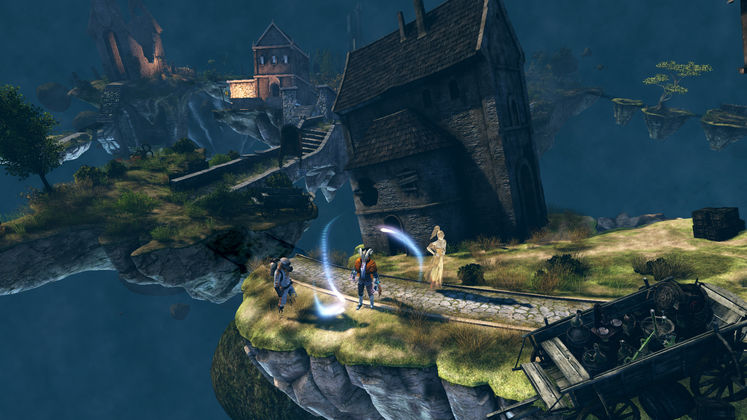 Is no one else really agitated about that cart about to fall over the edge?

I have to admit to being overwhelmed when faced with this range of classes but for my main playthrough I went traditional (and perhaps boring) with the Bounty Hunter. It just felt right given the character, though Van Helsing the master weird scientist in a super-mech suit was tempting.

Though on the surface there’s a wide choice of classes I couldn’t escape the feeling that all the ranged classes were essentially the same. You need to keep a distance from the enemies and just pile on the damage in whatever form. I understand the desire to present six different classes is pretty awesome, but three highly nuanced and distinct ones would’ve worked better for me. Hell, even just the ones from the last game.

Skills are also lacking a bit. In the previous game you had over 20 magical skills to unlock but here there’s only 8. There’s no real character import option either (your name and glory points carry across only) as the classes have mostly been re-written. Understandable perhaps but galling for those who’ve gone through the previous games with their chosen character and class. The level cap at 30 is also a step down from the 60 of the previous game. In order to get this game out it feels like the developers have stripped back some of the features that existed in Van Helsing.

These feel like a lack of development time more than anything else and it’s a shame that the potential replayability of the game has been cut down with no New Game+. Maybe it’ll be added later and the lower price point of Van Helsing 3 makes me wonder if this was always the plan and expansions adding what’s missing will be next. I’m probably wrong and just being conspiratorial but it’s a mighty shame that so much of what made Van Helsing 2 so good is gone or changed. 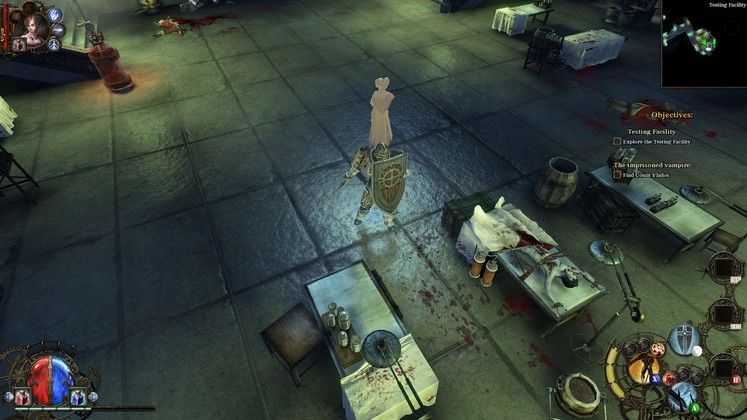 That’s not to say the game isn’t enjoyable because the moment to moment gameplay is as fun as ever. The detail in the varied locations is brilliant and makes the city of Borgovia come alive better than ever. Lady Katarina returns of course and her story, as this is the last in the series, gets some closure and is surprisingly poignant. Her and the good Van Helsing share the usual banter throughout their adventures, a hallmark of the series and, if you’re like me, a real love-hate feature of the game.

The dark world is usually at odds with the modern culture references spouted by the two leads. This could be annoying if you were seriously into gothic vampire lore but, hey, you’re playing a videogame not decoding a Grimoire. What is a little grating though is how constant the repartee gets. Not a moment goes by without a pithy remark or sarcastic put down. Given its low price point you’re getting pretty good value with such a lot of voice acting but jeez, Katarina and Helsing have verbal diarrhoea of the finest order.

I’d like to bring up phrase #65 in the reviewers handbook which states that, “if you liked the previous two games then you’ll probably like this”. If you were casually into those games then I think the changes Van Helsing 3 makes won’t bother you so much, but if you’re an ardent fan then those alterations will frankly, piss you off.

It’s still fun to play though, levelling up and expanding your skills, causing utter destruction to a wide range of enemies. The loot itch is still well and truly scratched, with tons of items, weapons and armour to swap out or sell.

Yet even here there’s a problem and it’s how unkind the UI and levelling up process is. The learning curve is hard and it’s not obvious how or what skills work where. There’s a ton of menu’s and character sheets to get through in order to level up both Van Helsing and Katarina and the clutter makes this process long and tiresome, despite the end result being pleasing.

It’s not game breaking but very off-putting to begin with, enough for new players to throw their hands up and walk away. Give it time and you’ll grasp it but I really don’t think players should be expected to wade through so much clutter in order to level up. 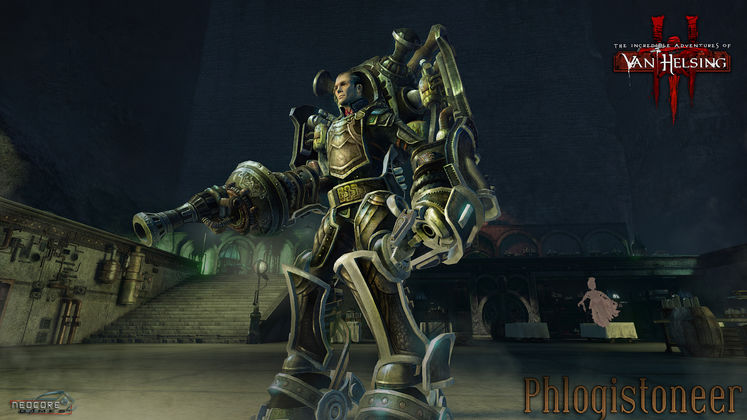 Despite the game's issues the Phlogistoneer still looks awesome

When you need a rest from that click-fest there’s supplementary quests to complete via your secret lair - sending out minions to complete tasks for more gold and loot. It helps to add a bit more meat to Van Helsing’s bones although you’re eating the same meal as last time as this system is pretty much the same from Van Helsing 2. But hey, never enough bacon right? The tower defence minigame returns as well which helps to break up the action.

Visually Van Helsing 3 looks good, with detailed environments that evoke the grimy, miserable and mucky gothic world in all of its forms. It does feel a little bit like the level and art design is on autopilot and you could argue that this feels more like an expansion for Van Helsing 2 than a proper full-blown sequel. Once again though that doesn’t feel nearly as egregious as perhaps it should as the moment to moment gameplay is still strong.

The Incredible Adventures of Van Helsing 3 is a good-looking game but the lack of features from the previous entries are a sore point. Allocating skills and levelling up are hindered by a very cluttered UI that would put any newcomer off and the range of classes feels a little false given how similar some are to each other. The snarky commentary of the main leads may also irritate after a while but there’s also plenty of genuinely funny moments to liven up what would be a too-serious gothic tale. At its core Van Helsing 3 feels like a solid game but it’s a few updates short of what the trilogy deserves. Maybe that’ll be added later but this feels rushed in places and fans of this demon hunter ARPG deserve better.

Colourful explosions of the Elementalist give off a wonderfully contrasting effect against the grim environments.