The Incredible Adventures of Van Helsing

Neocore enter the crowded Action RPG marketplace with The Incredible Adventures of Van Helsing, but does it put on a good show?

Neocore enter the crowded Action RPG marketplace with The Incredible Adventures of Van Helsing, a title that forgoes some of the genre conventions in favour of a more arcadey approach. As the titular hero (son of Bram Stoker's more famous monster hunter) you'll hack, slash and shoot your way through the fictional eastern European town of Borgovia and the outlying terrain. As you might expect of a game of this nature, your walk through the picturesque countryside is no stroll through the park, instead you'll spend the majority of your time indiscriminately murdering a combination of dangerous wildlife and mythical beasts, completing quests for helpless locals (or um... friendly vampires) and generally being a hat-wearing, cloak- rocking badass.

Fans of action RPGs may at first find it rather jarring that you're unable to select a class for Van Helsing, with all his abilities instead spread across two skills trees, which roughly translate to melee and ranged. Magic too is present if you favour spellcasting, with both ranged and melee flavours once again on offer. You can specialise, becoming a pure gunslinger or mix and match - dabbling with magic for added versatility, or purely because using your pistol to electrocute or set someone on fire is hilarious. The skill tree allows for a pleasing amount of depth, the more you examine it the more potential combinations and synergies between skills appear with further perks and passives available. While it's certainly effective to simply specialise in shooting people, on the harder difficulties, you'll likely appreciate the option to use elemental attacks on enemies with physical resistance, or use a more basic attack interspersed with the more powerful mana-hungry abilities.


Combat is fast-paced and relentless, it's not a rare occurrence for your screen to entirely fill with monsters, charging at you with hostile intent. An indicator of the slightly pared back approach to combat mechanics is that you'll only have two basic attacks equipped at once (this may be a concession to the forthcoming Xbox release), although you can further augment your approach with a couple of utility skills as well as two passive abilities. Adding depth and a bit of punch to the system is the use of Rage, which you build up through attacking and killing foes. Activating your rage further enhances your two main attacks, with each activation adding up to three effects to your abilities. For instance as a gun user you can add an effect to your basic explosive shot that causes it to affect a wider radius, to do more damage outright, or to add a mana leeching effect to your next attack, which you can then use to power your magical abilities. You can set-up your preferred rage combos in advance, or the quick witted among you can add effects manually via the number keys. A timely activation of rage can be priceless as a rabid horde of werewolves closes in on you, your health bar ticking away to nothing. A lucky critical on a rage attack will make the screen shake as your foes erupt in a geyser of blood, accompanied by satisfyingly high numbers popping out of their heads (these can of course be toggled off).

Accompanying Van Helsing upon his Incredible Adventure is Lady Katarina, a ghost bound in service to the Van Helsing bloodline. Katarina wears a number of figurative hats, from acting as a tour guide, or providing combat buffs and support, to popping off to town to sell your loot. I would say she is analogous to the pet in the Torchlight games, but my fragile grasp on reality combined with her acerbic tongue, mean I'm hesitant to do so, for fear of a sardonic reprisal. You can use Katarina to fill any gaps in your own build, although I found that trying to utilise her as a tank on harder difficulties meant she'd end up dying frequently (though obviously being a ghost she never really dies, she just ceases to aid you in combat for a short time). Katarina has her own skill tree, which supports Van Helsing and as with the main character you can distribute her attributes to better fit the role you assign her, as well as customise her combat and looting behaviour. Lady Katarina is a welcome addition to the game. Her exchanges with Van Helsing add character – my favourite example being her lamentations of your charity in helping the beggars littering the streets of Borgovia, by exclaiming that she would like you to buy her a pony.

While Van Helsing sees you traverse swampland, forests, caves and small towns, a large portion of the game will see you in the city of Borgovia, a strange mix of Eastern European culture (with sights inspired by Neocore's native Budapest), Translyvanian influence and techno-magic. It's here that you'll discover your own lair, where you'll be able to take part in a tower defense mini-game - which albeit brief - provides some interesting variety, as you place traps and fight off waves of enemies in a manner reminiscent of Dungeon Defenders. It's almost a rule of ARPG's that at times the combat and endless waves of enemies will become repetitive, but the variety added by this tower defending excursion as well as a host of allusions and amusing references help to stave off the boredom. Neocore take a great delight in the inclusion of easter eggs, with Lord of the Rings references, a deadly bunny rabbit that will chill the hearts of Monty Python fans, as well as items that reference the studio's heritage – such as a certain sword normally associated with a mythical English monarch.


Perhaps the weakest part of the game comes in its replayability. The skill-tree for Van Helsing is adaptable, but it's no substitute for the different classes you find in the likes of Torchlight , Diablo or Path of Exile. While those games have randomised elements and terrain that changes each time you play, Van Helsing has designed maps, that once cleared stay clear (no grinding for loot here then – though it is plentiful enough). While there is a selection of difficulties and a hardcore mode - for those of you who like games to give you the opportunity to be enraged to the point of punching your monitor - there is no real end-game. There's no auction house meta-game, New game + or grind for a weapon with slightly better statistics. That's not to say you'll be starved of content, Van Helsing retails at a very reasonable price and the ten hours or so it takes to complete the campaign will leave you more than satisfied. Co-op too provides further incentive to replay - while there are a few associated bugs at launch, we can expect further support for co-op and multi-player in time.

What The Incredible Adventures of Van Helsing may lack in replayability it makes up for in competence, enthusiasm and easy charm. The moment to moment slaughter, the deceptively deep levelling and abundance of powerful loot mean it's a difficult game to put down. If you're sick of Path of Exile's grind, or tired of poring over auction house entries in Diablo III, The Incredible Adventures of Van Helsing offers you a more immediate option – to step into the shoes (and hat) of the roguish monster hunter and get down to the timeless pursuit of killing many monsters.

Finding that Unique hat that completes your monster-slaying ensemble – style and statistics in one floppy brimmed cranial adornment.

What The Incredible Adventures of Van Helsing may lack in replayability it makes up for in competence, enthusiasm and easy charm. The moment to moment slaughter, the deceptively deep levelling and abundance of powerful loot mean it’s a difficult game to put down. If you’re sick of Path of Exile’s grind, or tired of poring over auction house entries in Diablo III, The Incredible Adventures of Van Helsing offers you a more immediate option – to step into the shoes (and hat) of the roguish monster hunter and get down to the timeless pursuit of killing many monsters.

Finding that Unique hat that completes your monster-slaying ensemble – style and statistics in one floppy brimmed cranial adornment. 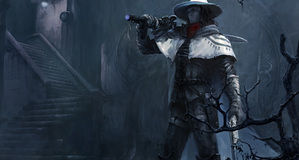