One of the great things about tabletop games such as Seven Wonders and Escape: The Curse of the Temple, is that a session can often be played and completed in half an hour or less; lending them extremely well to pick up and play scenarios where time might be of the essence. The Living Dungeon, the first title by British developer RadiationBurn, seeks to channel that sort of accessibility with quick skirmishes and an easy-to-grasp set of gameplay systems. A great idea in principal then, it’s just a shame that the whole package is hobbled by a poor single-player campaign and a real lack of polish.

From the get-go, the impression that The Living Dungeon yields is not a particularly great one. Specifically, the game is lacking in polish to such magnitude that it is keenly felt throughout its duration. From the uneven cropping of the interface to the lack of resolution options, obtuse menus, rudimentary character model animations and loading transitions it becomes difficult to shake the feeling that The Living Dungeon should have begun life as an Early Access title rather than being thrust onto digital store shelves as a fully complete and polished entity because quite clearly, it is not that by any stretch of the imagination. 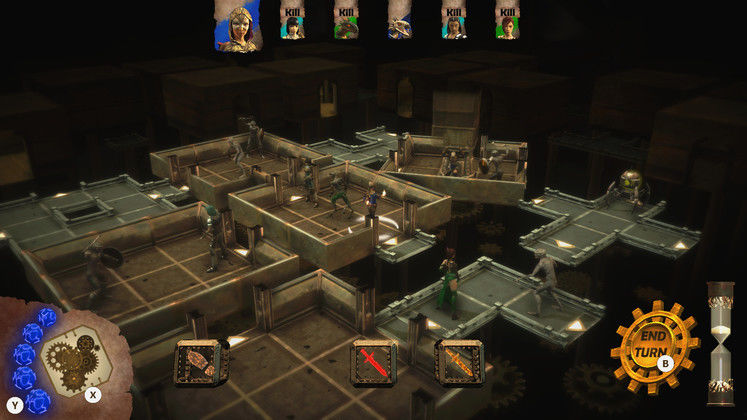 Knowing when to use your gems is paramount to success

Still, despite the overwhelming sensation that The Living Dungeon feels rushed, there is actually an entertaining if somewhat unambitious effort lurking at its core. In essence a take on the classic dice based board games of yore, The Living Dungeon has players locked in combat with one another as they use turn-based strategy tactics and dice rolls to secure a victory.

One of the more interesting aspects of The Living Dungeon lies in how those dice rolls are actually handled. Rather than merely presenting a numbered die with a numerical value attached to it, players get to roll five dice during every turn with each one containing a particular action which can be carried out such as movement, attack, mechanical or generic (the latter of which can be any one of the first three dice types).

Of all the dice types though, the mechanical ones are arguably the most interesting. When used, these dice allow the player to rotate or flip portions of the map, thus creating bridges and paths were none previously existed or, more hilariously, sending enemy units tumbling into oblivion.

Sitting atop the different types of dice is a ruleset that must be keenly observed lest your units end up shunted off the board. When attacking other units in the single-player campaign for example, each unit takes a single attack dice, while other stronger units, such as the shield-toting Hybrids, take two. Equally, when your turn is over, if you finish it surrounded by more enemies than you have attack dice, then you can reliably expect to perish in short order.

Other actions that you can take include a dodge manoeuvre that allows your character to switch places with another unit, regardless if it’s a friend or enemy and a distance-covering leap to name just two of the others on offer. Certainly then, like any board game worth its salt The Living Dungeon has plenty of these rules but in actuality it never feels like a chore to learn them and before long, you’ll have the ins and outs of the whole thing memorised with little trouble.

Due to the fact that the effectiveness of each turn that a player takes is predicated on the quality of dice that they roll, it should come as little surprise that a number of frustrating scenarios can manifest themselves. For example, if you have two enemies in front of you and the dice that you’re given have no attack properties, your options can sometimes be frustratingly limited and thus lead to a quick death. 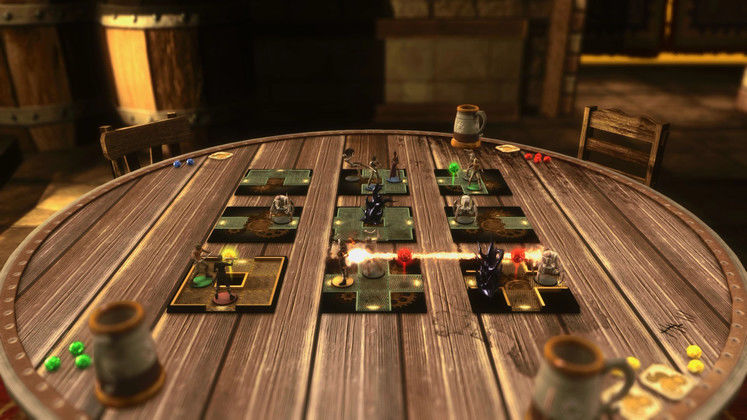 Sentinel death beams do exactly what they say on the tin. Avoid

Thankfully though, if Lady Luck isn’t on your side, there are a number of things that you can do in order to even the score a bit. Chief among these are finite-use gems which when used can either re-roll your existing set of dice or utilise a special ability, such as being able to kill a particularly potent foe for example. Elsewhere, certain characters have bonus abilities which allow them to magnify the significance of a specific dice type – so one character for might only need a single attack dice to fell a strong foe where others might require the usual two. While these elements don’t remove the head-scratching randomness of the dice system entirely, they do go some way towards addressing the frustrations which might otherwise stem from it.

For those armchair generals who intend to play The Living Dungeon in a solo capacity, the game accommodates with an extensive single-player campaign consisting of twenty-five or so missions and provides a good few hours of gameplay as a result. Somewhat disappointingly however, the actual campaign itself is a bit of a dud. The biggest problem with it is that the narrative is almost impossible to enjoy. Told from multiple perspectives and with only very brief cutscenes to link it all together, the plot in The Living Dungeon feels jarringly disjointed as it arguably does a poor job of establishing its cast and their motives.

Because these flaws effectively take the wheels off of the single-player campaign, it soon becomes clear that it only really holds worth as a training mode for the game proper, rather than the engaging, plot-based effort that it was originally intended to be. Clearly though, The Living Dungeon is operating at the height of its powers when you’ve got a bunch of friends huddled around the PC, itching for some turn-based scrapping.

As alluded to, The Living Dungeon scores a whole bunch of easy brownie points since it allows multiple players to gather around a single PC for some good old fashioned local multiplayer shenanigans. When a game gets going, it can end up being properly entertaining too, with players using their dice and abilities to stymie their opponents to steal victory from the jaws of defeat. Best of all, the games themselves don’t require a lot of time to be invested since more often than not most games are resolved in well under thirty minutes and as such it lends itself well to a nice bit of pick up and play. 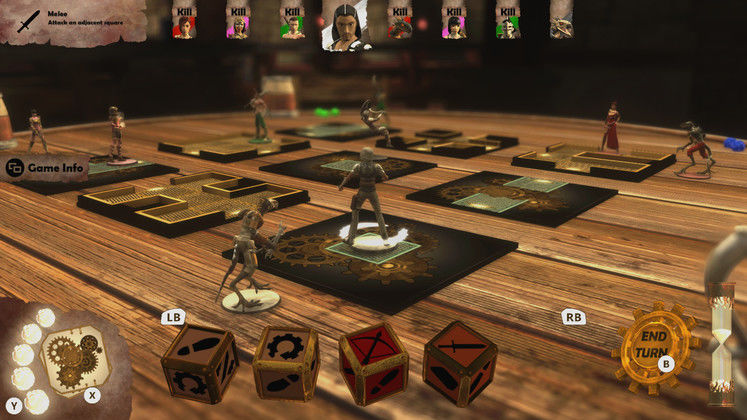 The tavern based environment is the more attractive of the two styles available, giving The Living Dungeon an attractive board game aesthetic

Something else that The Living Dungeon does to appeal even further to the pick up and play mentality, is that AI-controlled players can not only be used to make up the numbers but can also be employed to step in and take over from absent human players. This is something that proves to be exceptionally useful for dealing with players who have left the game or are absent for an extended period of time.

If there is a complaint about these skirmishes in The Living Dungeon, it’s that they can only be done locally since at the present time the game does not support network or online multiplayer battles - though with the game just launched, it seems likely that a future patch could (and really should) address this. Something else that a future patch should take a look at are the number of board themes available since, as of right now, there are just two – dungeon and tavern, with the latter looking in every way far superior to the uninspired former; showcasing a wonderful tabletop aesthetic not unlike the recent Tomb Raider and Hitman mobile games.

There is no doubt whatsoever that The Living Dungeon should have spent longer in the oven than the time that was afforded to it. Nevertheless, despite the fact that it feels like an Early Access title attempting to punch above its weight, The Living Dungeon still manages to provide numerous, if somewhat unambitious thrills in its hassle-free multiplayer skirmishes.

Being surrounded by enemy players and then using a mechanical dice to flip the board, sending most of them tumbling into the abyss. 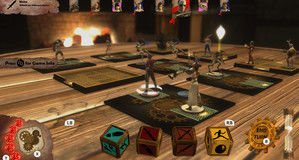