What’s in a name? Apparently not a whole lot if Toybox Turbos is anything to go by. Essentially a reboot of the Micro Machines games in all but name, Toybox Turbos whisks players back to a simpler time where the roads were sculpted by sugar sprinkles that carved a path through breakfast table tops strewn with piled waffles and puddles of sticky syrup.

With its retina-strokingly colourful presentation and bouncy musical score, Toybox Turbos is a game whose seemingly only desire is for you to have fun with it. It’s a maxim that gleefully extends into the menus too, as there are no long-winded detail settings (literally, none at all) or any other such nonsense to faff about with; there’s just single-player, multi-player, a garage to view your collected vehicles and a lightweight options menu the likes of which you’d expect to see on a console. 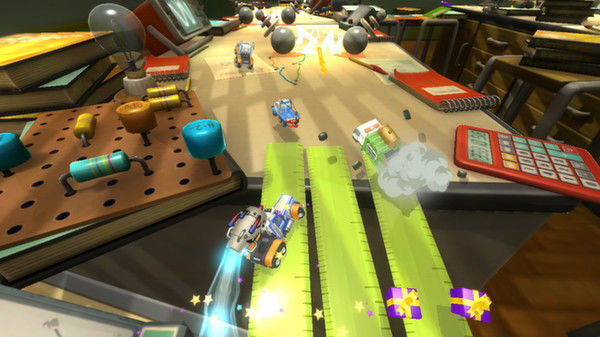 Each track is generously stuffed with environmental hazards.

The first stop for most players will be Toybox Turbo’s single-player mode as it does a pretty decent job of easing players into the game. Here, prospective toy racing legends not only get acquainted with how the game plays but also exposed to a number of different race types such as elimination, time-attack and boss battles where special vehicles are up for grabs, to name just a few.

For anyone who hasn’t played the Micro Machines games (and I wouldn’t blame you, the last one was pretty forgettable and came out over seven years ago), Toybox Turbos is a top-down miniature toy racer that plies its white-knuckle ambitions over a wide variety of domestic environments that masquerade as race tracks.

From tables covered in breakfast food and kitchen utensils to the floor of a child’s bedroom strewn with toy soldiers and plastic forts, each and every of the eighteen tracks that the game offers is different from the last and brimming with character. Better yet, the differences go beyond merely cosmetic, as each of these tracks leverages its unique theme to include some brilliantly fiendish environmental hazards to stymie unsuspecting racers.

Such examples of these hazards include rulers that double up as bridges between tables, puddles of syrup that can slow down vehicles and toasters that launch your tiny motor across the level. In short, players aren’t just racing against their opposition, they’re having to contend with the nefarious nature of each track as well.

If that wasn’t enough, every racing course is liberally stuffed with short-cuts and in the later stages where the AI racers become slicker and less fault-prone, they become essential to winning races as much as anything else. Luckily, winning the races in Toybox Turbos comes down to more than just being faster or taking the corners better than your fellow racers. You see, like the Micro Machines template that Toybox Turbos so fervently subscribes to, there are a number of power-ups dotted around each track that can be used to tip the momentum of a race in your favour.

Such power-ups range from machine guns, mines and giant car-mounted mallets that can destroy other vehicles to boosters which provide a few seconds of super speed and in each case, knowing exactly when to use these special abilities is just as essential as knowing how to take a corner properly. 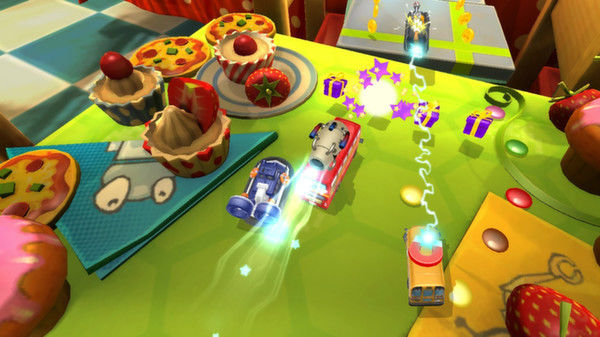 Beyond the effervescent delights of the game’s outlandish tracks and crazy power-ups, Toybox Turbos best work is a little more low-key. By deftly echoing with aplomb the basic handling of the vehicles in the earlier Micro Machines titles, the minuscule racers in Toybox Turbos feel ultra-responsive and have that lovely drift-style handling that characterised the franchise from which Codemasters latest draws its sizeable inspiration.

Furthermore, there’s a real difference between each of the thirty-five vehicles that the game allows players to get their hands on, too. From toy buses and moon buggies to miniature combine harvesters and steamrollers, handling, speed and weight attributes are assigned to each; the latter being especially crucial to aggressive players who are in the business of attempting to knock other racers off the side and into oblivion.

Speaking of oblivion, one area where Toybox Turbos isn’t always so hot is in regards to the camera, especially during the boss events where the issue can become quite problematic. In these races where you need to speed off the screen to gain points to beat your opponent, the camera instead focuses on the space between the two cars, rather than the one which is in front thereby making trying to see what’s coming ahead almost impossible and inviting unfair crashes in the process.

As good of an introduction as the single-player mode is to the toy racer shenanigans of Toybox Turbos, the game’s true worth arguably lies in its almost terrifyingly compelling multiplayer modes and as such, the game’s appeal will be limited for those who aren’t interested in playing with others.

Packing both online and local multiplayer modes across all the game’s maps, modes and vehicles, it’s in the latter that Toybox Turbos really shines. Having up to four folks all bustled around a single PC as you all excitedly jostle for position, knocking each other off kitchen tables and unleashing power-ups to gain the lead is a genuine thrill and one that evokes memories of jovial social gatherings around a single screen in years past. 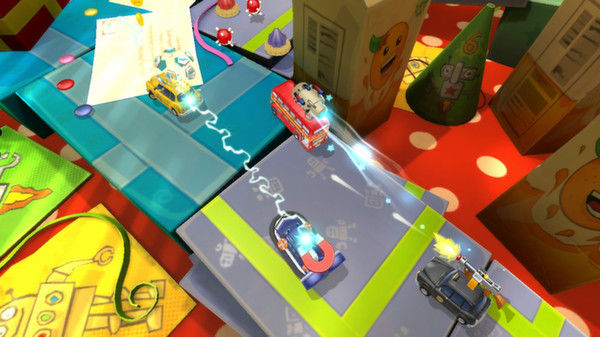 Multiplayer has an evergreen charm and gives the game real longevity

In essence, Toybox Turbos serves as a potent reminder that social gaming is as significant locally, if not more so, than when it’s done online. Additionally, we can only hope that the propagation of more experiences like this follow soon to show folks that the consoles are not the sole bastion of local multiplayer experiences.

The only other real knock on Toybox Turbos is that for anyone who has played the Micro Machines games in years past, the game feels more an exercise in revision rather than evolution. Everything that exists in the game feels identical to the Micro Machines games of yore and as such, Toybox Turbos fosters a sense of over-familiarity that makes it feel much more like a ‘best of’ compilation, rather than a true re-imagining of the series for contemporary technology and players.

Toybox Turbos might not have the Micro Machines branding then, but when it nails everything else that those licensed games did so well in the first place, it feels churlish not to look past such superfluous things. Camera issues and a relative lack of ambition aside, this is the new Micro Machines title that you forgot you wanted and quite honestly, it’s just great to see this type of game again in 2014.

Get some friends, get stuck in and don’t mind the name above the door.

Being fired out of a toaster and flying across a kitchen table as you perform a perfect drift around the next corner. 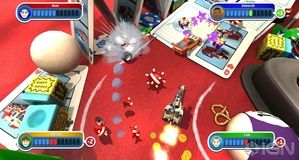