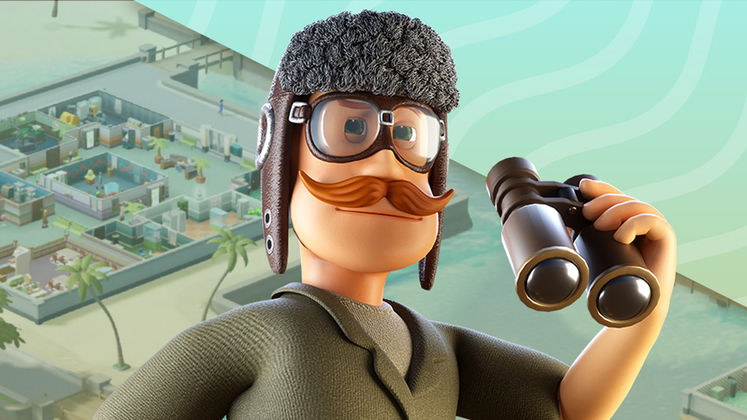 Two Point Hospital was one of our favourite games of last year, even getting nominated as one of our games of the year, so of course we’re incredibly excited about getting to play more of it - and a little nervous too. Can developer Two Point Studios expand on the concept in a meaningful way, or is the new Pebberley Island DLC just more of the same?

The Two Point Hospital Pebberley Island expansion consists of three new levels, linked with the conceit of going on an Indiana Jones-style adventure to find the fountain of youth. That never really happens, of course, as you’ll be too busy managing your medical facilities. At first glance the DLC doesn’t seem to offer anything beyond a tropical climate (so you’ll need to build air-cons instead of radiators), but then things get very clever indeed. 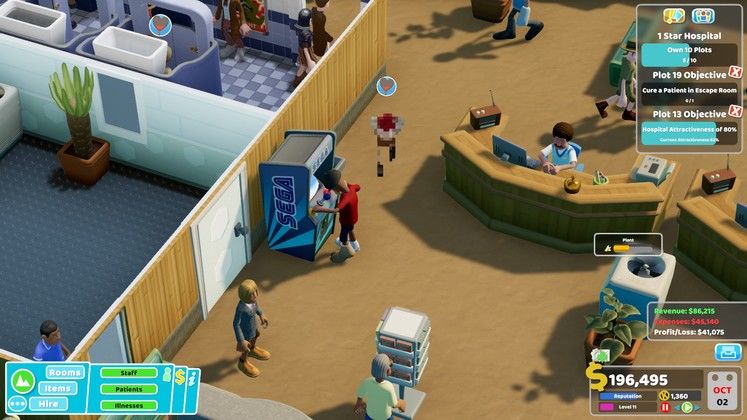 The first island, Pebberley Reef, seems like it’s been built entirely to lull players into a false sense of security. It has its own motif - which is that janitors are all useless and have to be trained - but mostly it’s about getting used to the new diseases, so it’s basically a normal Two Point map. That all changes over the second and third maps, which throw out the rulebook in fascinating, exciting, and really enjoyable ways.

In Overgrowth, the second level, it’s entirely outside. You have a set building area, but patients can wander wherever they like. Secondly, you can’t buy plots of land, you have to complete tasks to open up new areas. This is a really neat twist on the Two Point formula, and this whole level was a challenging joy to play, plus it felt completely unique. The final level, Topless Mountain, is even more bizarre - it’s a Horde mode, essentially. Patients come in waves, so you have to prepare all your facilities and set things up between waves - often without even knowing what diseases you’re going to face. 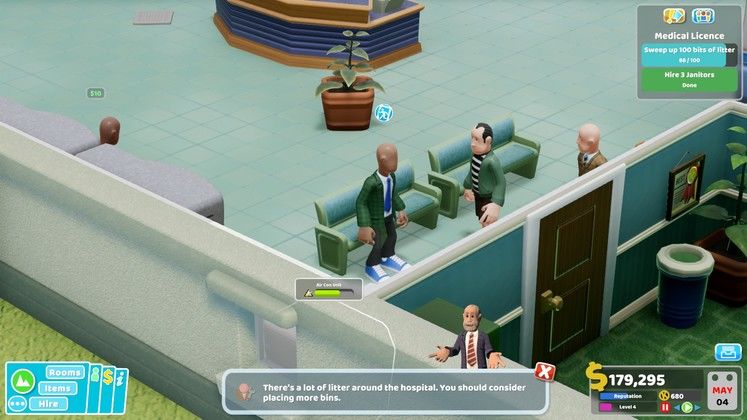 To make things even more challenging, there are a lot more random occurrences too to throw a spanner in your works. Lightning storms, random packs of ghosts, volcanic fireballs, tornados, even hails of frogs - which land stunned on the floor until your janitors come to brush them away. VIPs can be a lot harder to impress too, especially when your EZ-Scan explodes in front of them - I never lost a piece of equipment in the main game, but things can get so hectic you may not notice that a part of the hospital is on fire. Hectic in a good way.

Of course, there’s also new diseases, and these fit in well with both the main game’s craziness and the more tropical, adventure-y theme of Pebberley Island. These include patients being turned into parrots (Budgie Struggler), wanting to be an adventurer (Wanderust), and looking like they should be in an Atari game (8-bitten). The treatment rooms are just as entertaining as always, and sometimes are a challenge in their own right - the Indiana Jones-like Escape Room for Wanderust is gigantic, and can take up a whole section of the hospital. It’s exceptionally detailed though. 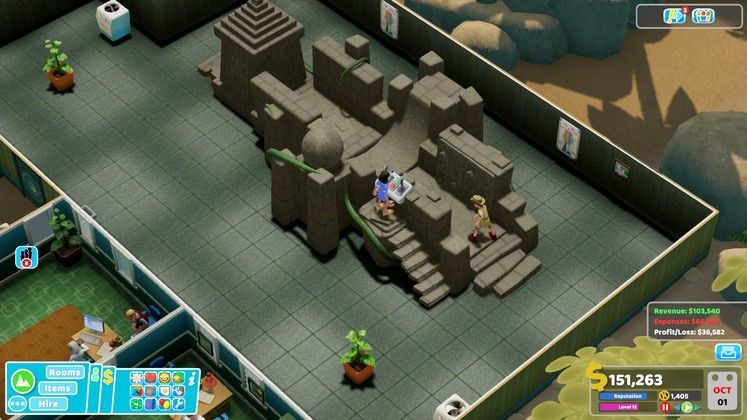 Our system is an AMD FX-8300 Six-Core Processor, 16 Gb RAM, Nvidia GTX 1050 Ti 4Gb, and Windows 10 64-Bit, which was complete overkill for Two Point Hospital, and is just as fine to run the DLC in full settings as the main game. We did encounter the odd moment of slowdown in busier times, but in general it ran with no problems - and still looks lovely. The animation on some of the new treatment rooms is particularly great, with the Escape Room being an obvious highlight. 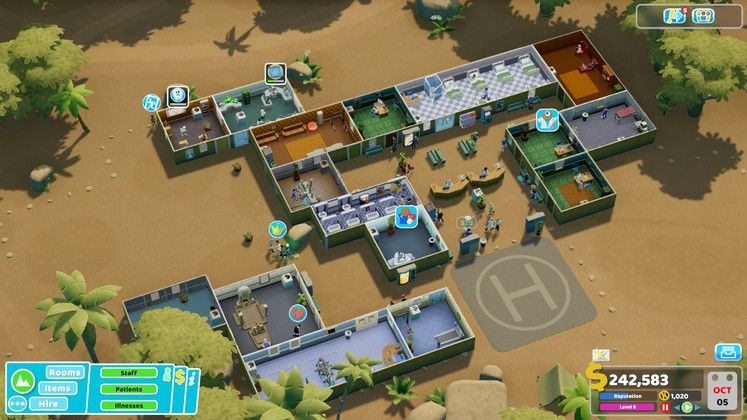 Two Point Hospital was one of the best games of 2018, and the Pebberley Island DLC doesn’t let it down. While the first level relies on crazy weather and useless janitors it’s merely a way to get you up to speed before the true, imaginative, creative weirdness of levels 2 and 3. The game forces you to change up your tactics, and throws you real challenges you’ve never faced before. It’s clever, and tough, and it’s never less than incredibly fun. It may be only three new levels, but if you need some more Two Point Hospital in your life, you won’t do better than visiting Pebberley Island.

Seeing the Escape Room in action. Or the rain of frogs…