Oh what a lovely war

It was slightly odd to see strategy RPG Valkyria Chronicles pop up on PC. Though a cult hit upon release back in 2008, it was never a massive commercial hit, and it seemed like even hardcore fans had given up hope of ever seeing a ported version. When one was finally announced the question became - what kind of port was this going to be? With several recent console RPG-to-PC ports not doing a whole lot to justify their existence (I’m looking at you Final Fantasy XIII), it’s surprising to find out that Valkyria Chronicles feels right at home on the platform, and offers the most attractive available version of this charming, unique game.

Chronicles casts you as a scrappy group of teens from the country of Gallia, a neutral nation that gets caught up in a massive inter-continental war when the forces of the East Europan Imperial Alliance invade. The story’s told through a series of scenes, some purely cutscenes and some combat encounters, presented in a chapter menu that looks like an old wartime newspaper. Each page is split into sections, some will throw you into a battle, while some will fill you in on the story. Lovely to look at, but it means the story does get off to a bit of a slow start, and can feel a bit fractured. It takes a few hours for the plot to really get going. 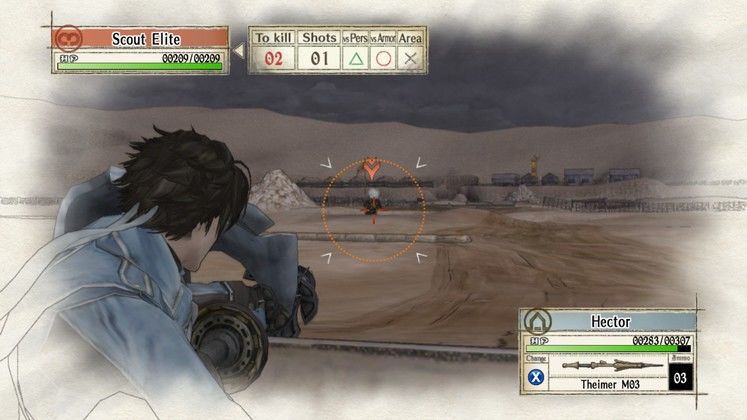 Lancers are specialists in anti-tank weaponry. You'll need some of them.

When it does, it’s a largely engaging tale of war and loss, and its effect on friends and families. It’s maybe a bit too on-the-nose in terms of sentimentality to really hit you in the gut the way something like Valiant Hearts (an obvious thematic cousin) did, but the characters are charming and the world-building interesting enough to capture your attention. Despite the occasional moment of jarring melodrama and the largely uninspiring voice-acting, there’s a weight to your actions and an edge to the world that similar games lack. By the time the action begins to ramp up and the sci-fi fantasy elements begin to kick in you should be fully invested in the story of plucky Squad 7.

It helps that the game looks great. The graphics are solid if unspectacular, but the art style is really distinct and cleverly put together. Cutscenes are surrounded by parchment style borders, recalling old letters or photographs sent home from the front-line. I’m not entirely convinced that it’s useful for storytelling, but the aforementioned chapter select screen also lends to the feeling of melancholic nostalgia. There’s a restraint, too, in the design of the units and architecture. Though there are stylised elements, there’s few outlandish characters wielding inconveniently elaborate weapons, and this helps sell the more restrained setting.

So the storytelling is good, but it’s the game’s strategic combat that really shines. I’ve not really ever played anything like it before. Battles are split into top-down strategic overview and a third-person mode. At the start of each turn, you pick a unit to move. Each of the game’s classes have a certain amount of ‘CP’ or command points that can be expended on movement, with the zippy Scout class the most manoeuvrable. Once you’re in place, you can aim a shot manually, or hop into cover. The aiming is done manually, but the shooting itself is carried out automatically, so there’s still that random element to consider. 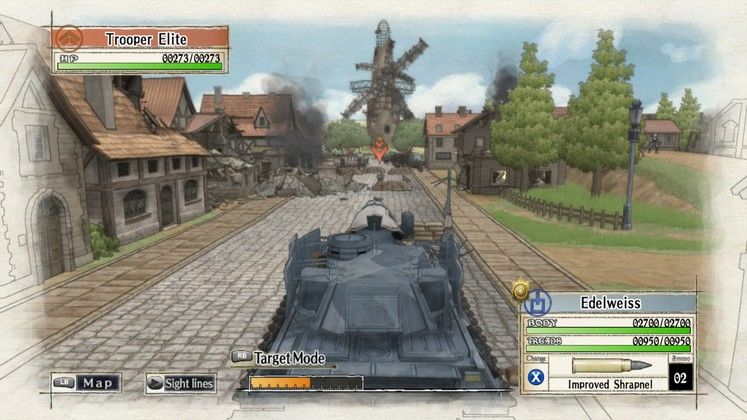 Your tank can smash straight through obstacles, carving a path for your troops.

Maps are huge, and packed with tactical considerations. Do you sprint out ahead, drawing fire but getting close enough to ensure a kill-shot? Do you send your sniper up on that building to cover you? How are you going to deal with those landmines, or that enemy tank? Oh, that last one reminds me – you get your own tank, the trusty Edelweis. It’s brilliant, a rolling weapons platform that can be utterly devastating if deployed correctly. Later on you’ll start unlocking new weapons and even more tactical variations will pop up in battle, so there’s never a sense that you’re going through the motions. Every decision is a weighty one.

Doubly so, because aside from three plot-armoured story characters, every single one of your troopers can be permanently killed. Chronicles handles this smartly. You’re not punished for losing a squaddie, because you level up each class rather than individual soldiers. Should your shy young sniper Reynolds bite the bullet, his replacement will be just as capable. Still, you’ll miss the youngster’s awkward enthusiasm, his finely groomed facial hair and excellent squadmate patter.

The game forges a personality for every one of your soldiers, slightly altering their dialogue and their appearance, and making you fiercely protective of them in the process. It’s a similar approach to the one XCOM utilised so well. One of your team dying isn’t a disaster, but you’ll still be desperate for it not to happen. Luckily, if a man falls you’ve got a few turns to get to him and call in medical support. I found myself restarting several missions just so I could keep my favourite squad alive. 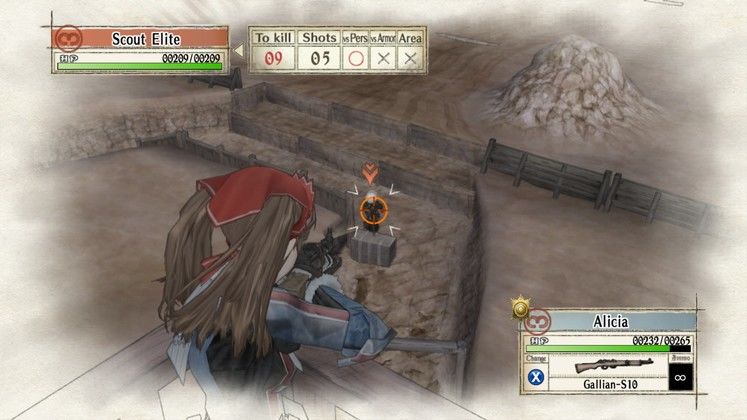 Getting a height advantage helps you nail those key shots.

By the end game, where you’re researching squad upgrades and reading through each of your squaddies’ back-stories, I think it’s fair to say the game had its hooks firmly embedded in me. My only recurring issue was the often dunderheaded AI. It’s just a bit too easy to outsmart enemies, who don’t make clever use of cover and have a nasty habit of jumping into the open to get mown down by the Edelweiss. When you’re factoring in hordes of special enemies and tactical issues like sandstorms, it’s easy to forget or ignore the computer’s foolish moves, but then you’ll get a seemingly tough battle that’s reduced to a farcical pushover by a stupid AI decision, and it kind of spoils your fun. A shame, because it’s the only issue with an otherwise pretty fantastic combat system.

It’s gratifying to see that Valkyria Chronicles comes with all the necessary graphical bells and whistles. There’s a range of HD resolutions, V-sync functionality, and the game runs at a constant silky 60FPS. That shouldn’t feel like a triumph, but considering the poor quality ports PC gamers have come to expect, it really does. SEGA has done a fine job here. The only element that suffers in the conversion is the game’s cutscenes, which are for some reason rendered in lower resolution. I’m not sure why this is the case, but it’s a relatively minor blot on the copybook. Mouse and keyboard controls are slightly clunky as a result of the console focus, but you do get the option to re-map them, and controllers are supported.

If you’re a fan of RPGs, you should really check the game out; the story is engaging and the characters are fun, but it’s the charming picture-book aesthetic and unique combat system that really make the difference. At a knockdown price with all the extra DLC included, there’s really no reason not to give it a go.

There are few more satisfying feelings than flanking a horde of enemy troopers with the Edelweiss, before letting rip with your machine-guns and heavy mortar. 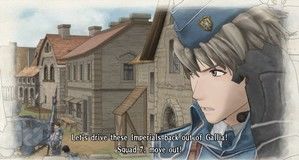