I feel the need... for speed

If there’s one genre that’s noticeably fallen by the wayside in recent years, it’s the arcade flight sim. Once a staple on both consoles and the PC, most notably represented by the venerable Ace Combat series and Tom Clancy’s H.A.W.X, it seems like the industry suddenly decided there was no longer an audience for fast-paced, action-focused combat games in which you don’t have to memorise forty-two separate cockpit controls before taking to the skies. Small Portuguese team TimeSymmetry hopes to prove them wrong with Vector Thrust, an ambitious homage to this faded genre that has just engaged thrusters and roared out of Early Access. So how does it hold up?

The first thing you notice upon booting up the game’s main menu is that there’s a lot to play with here. Quite apart from a lengthy story campaign, you’ll find challenge modes that slowly give you access to more and more advanced versions of famous planes, skirmish options, a fairly competitive and robust multiplayer suite, a quick battle option for when you just want to jump right into the cockpit, and even a map editor for creating your own custom combat arenas. It’s an impressive roster, but it would be meaningless with a strong gameplay foundation to back it up.

Thankfully, TimeSymmetry has cooked up an excellent combat system; fast, fun, simple to pick up yet challenging enough to keep you coming back. It’s pure Ace Combat entertainment, full of wild Top Gun antics that would probably leave you as a smear on a mountainside if you tried to pull them off in a real plane, but that makes you feel like a physics-defying badass thanks to the game’s arcade approach. There are a couple of nods toward realism; missiles will only track their target if you judge the angle and acceleration just right, which makes timing your strikes crucial, and the flight model punishes you with stalls and G-force buffeting if you try and pull insane turns in anything but the most high-end planes. 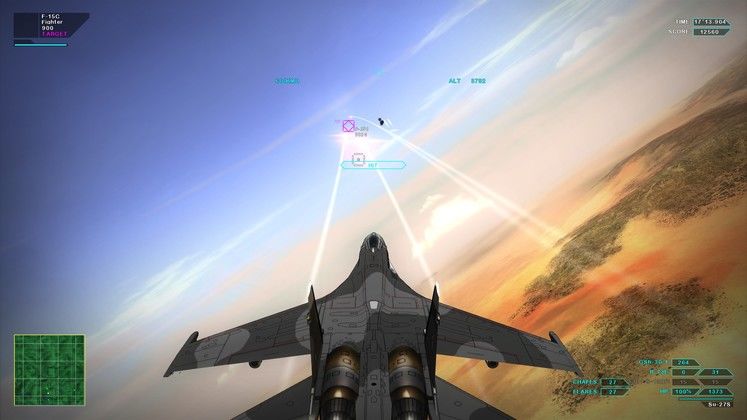 Missiles won't track if your angle and approach vector is wrong, so timing is key for those spectacular kills

The game looks nice, too, with some smart use of cel-shading and some neat visual effects that cleverly mask a fairly unremarkable engine. With the anti-aliasing options and resolution racked up, the game looks sharp and colourful in the air, with satisfying explosions and some lovely touches like a subtle sonic boom effect when you roar past Mach 1. Like many air combat games, the illusion slightly breaks down when you get close enough to the ground to note the muddy terrain and blocky building models, and the cockpit interface is a little rough, but in the midst of a frenzied aerial killball Vector Thrust can be a very attractive game.

It’s also very impressive just how different the countless planes in the game feel – for the first few story campaigns and challenge missions you’re restricted to ageing Soviet fighters that feel like they’re about to come apart at the seams every time you nudge the joystick, but after earning a few thousand credits from various game modes you’ll be zipping around in an F-16, corkscrewing like a maniac, or piloting the plodding yet redoubtable mobile gun platform that is the A-10 Warthog. There’s enough variety in the missions and challenges that you won’t always want to hop into a pure fighter plane, and though some of the stranger creations – VTOL prototypes, stealth bombers and the like - aren’t exactly perfect combat vehicles, it’s still fun to hop into a skirmish game to test them out. 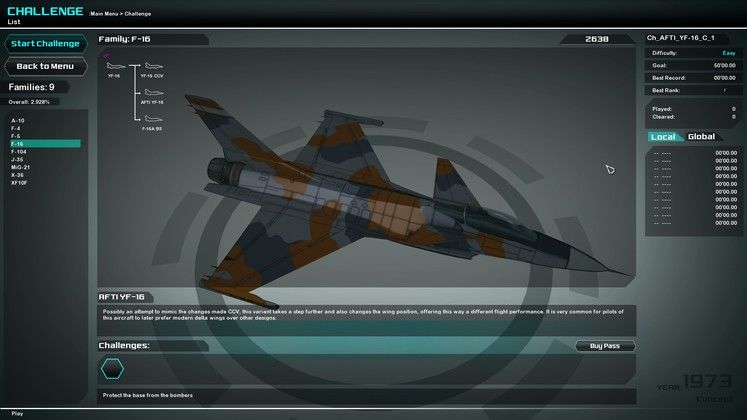 Speaking of missions, the story campaign offers 13 of them, ranging from fighter wing duels to bombing runs, to escort objectives. It’s a decent enough fist of a campaign, with a nice nod towards Ace Combat’s use of fictional countries and a vaguely near-future feel, but it’s let down by a lack of checkpoints and a lack of clarity in your mission objectives. The former is the biggest offender; in missions with multiple stage objectives, with a combat system where it’s very easy to misjudge a turn and get vaporised by a stray missile, the fact that you have to restart the entire mission after one death, or failing to protect your escort from one rocket barrage, is just too punitive. Added to that is the fact that there are no objective pop-ups in-game, so sometimes it’s needlessly hard to tell what you need to do next. Generally, the answer is ‘blow everything up’, but there were several occasions where I did just that and discovered that no, actually I was meant to spare one of the targets. 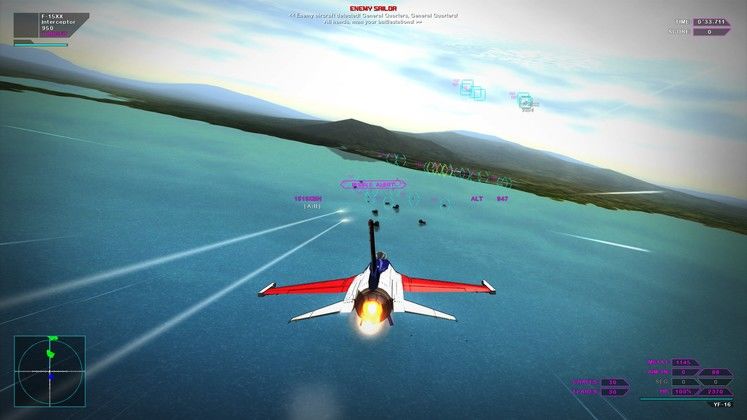 Ground combat isn't quite as much fun as the aerial duels, and low to the ground the shortcomings in the game engine become more apparent

It’s a shame, because there’s some surprisingly solid voice work, and clearly a lot of effort has been put into providing something a bit more ambitious than you might expect from such a small-budget game. There are a few spelling mistakes scattered here and there, and all the story scenes are simple narration over a still image, but there’s still a charm to its low-budget storytelling. Sadly, after the plane they’re escorting gets blown up at the last minute for the four hundredth time, I worry that a lot of players won’t bother seeing it through to the end.

Still, there’s plenty more to keep them satisfied, and the game’s rough presentation and slightly disappointing campaign are easy to forgive when the basic gameplay is so solid. I had no idea how much I’d been missing a decent arcade flight sim until I started playing Vector Thrust. TimeSymmetry’s passion for the genre shines through in every action-packed moment, as you crash through a fighter screen in a hail of rockets and minigun rounds, or wheel in behind a wildly evading MiG to finish him with a well-placed missile. In those moments, it’s easy to forgive the lack of polish. Vector Thrust is an enjoyable revival of a largely forgotten genre, and if you’ve been craving some rocket-fueled dogfighting action, you should definitely check it out.

When you save up enough credits for an F-16 jet, then roar into combat with long-range missiles blazing. 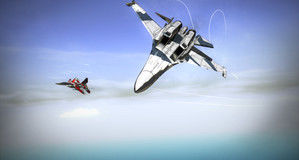