The goal is simple, select your nation and lead them to glorious victory over tyrannical oppression or in fact, be the one to stomp your empires righteous boot over your enemies and rule unopposed. For any gamer familiar with the Total War series from Creative Assembly, or Pyro Studios’ Imperial Glory, then you’ll find adjustment to War Leaders that much faster than a fresh faced grunt.

You can select the degree of historical accuracy before kick-starting the global conflict; so if you prefer a little rewrite then you could always keep it low and delay the European ruckus. In any case one thing will remain a constant and crucial thing to bear in mind and that’s your war leader. Should you manage to leave your nation’s unifying figure - Winston Churchill, Joseph Stalin, Adolf Hitler, Harry Truman, etc – exposed to the enemy then your legacy and war effort could end before it’s really even begun; this principle applies to your opponents too of course.


To help you acclimate to War Leaders there are a number of tutorial videos you can watch that covers all the games aspects. In case you missed anything Enigma attach some basic pause, rewind and play functions to each of the videos. The games turn-based campaign is the easiest half with real-time battles proving to be a little tougher to comfortably fall into, and it could have been eased a little more if they had included interactive tutorial scenarios.

Once you’ve selected a nation you’ll be brought to the campaign map, which much like Total War and Imperial Glory, runs in a turn-based fashion. Only when your forces engage an opposing army will you have the option to get down on the battlefield and experience real-time combat. Whilst Total War has armies move through territories gradually and can take a few game turns as they traverse the very landscape itself before moving on, War Leaders takes a differing approach. Much like Imperial Glory, each nation has their sovereign lands carved into a few slithers and armies simply ‘jump’ into the next within one turn. This helps keep the campaign strategy simple but does of course leave little room for deep tactics as it becomes a race to stack the most units.

Aside from commanding your nation’s armed forces you’ll also be casting your eye on tax levels, building development, research priorities and diplomacy. You don’t need to worry too much about managing taxes, what structures to focus on or even what forces to build as you can opt to have the game AI handle those automatically; though you’ll likely want to handle some of that yourself. Tax will affect happiness so it requires you to strike a balance between feeding the war machine and making sure you don’t become despised by your own people. Research and development will prove essential for getting an upper hand and when significant discoveries are reached a small black and white flick plays and describes a little about it. Diplomatic relations are rather simple and presented in the style of a web showing you quickly and clearly who is and isn’t impressed with your antics.


Visually the game is rather beautiful to look at with the world map very sharp and colourful with easy going UI to help you get around. Load issues annoy though with the campaign taking its sweet time to finally boot up with it taking around a minute and 35 seconds on average, this game shouldn’t be outbidding the time it takes something like GTA IV to load. The voiceover for the narration is very good and makes it feel very late 1940’s, while generic unit voices can begin to grate after a while and seem a tad insulting when Japanese troops bark good wholesome American accents and phrases. What, no Banzai?

Eventually war is going to spark and then the game finally gets underway. Playing as Japan at one moment I was suddenly informed the Third Reich of Germany saw fit to wipe me from the world, followed shortly by the Red Army of the Soviet Union – to be topped only by the military interference of the United States, and I hadn’t even glanced at Pearl Harbour yet, honest! When your forces come into contact with an enemy position you can either have the computer resolve the battle by calculating the units involved, their strengths and weaknesses etc, or not leave the fate of your armies at the hands of number crunching and take to field command yourself. The real-time battles start paused allowing you to position where you’d like to start with you forces, and then you click the start battle icon at the top of the screen. Its best you view the tutorial videos before taking your tanks for a stroll to make sense of the control panel.


The battles themselves are a little underwhelming when it comes to detail, with soldiers looking cloned and again weak unit voice over work. The action can heat up at moments but for the most part it felt like a huge wasted opportunity for some real gritty WWII action, but I guess RTS games like Company of Heroes may have spoiled us rotten by now. Conflicts will take place in valleys, fields and urban towns which all alter the effectiveness of offensive and defensive tactics. Your units can be ordered to assume three different types of formation which are march, defence and offense with each carrying bonuses to attributes like speed, precision and attack. Infantry can be told to walk, kneel or go prone to boost their performance on the field but at the cost of movement. You’ll have a generous number of units to build and enlist from infantry and tanks to ships and aircraft to wage your way to the enemies’ capital. Ships and aircraft inject some flair to the duel of armies with the ability to follow the pilots whizzing around above.

War Leader’s Clash of Nations is good for an armchair general who likes his history rewritten in biro, but for someone who enjoys a fancy quill then you’ll likely get bored with the lack of strategic depth through the campaign world. Battles can be fierce and lively with bombing runs, aerial dogfights, naval bombardments and tanks squaring off, which is probably the better half of the game. It’s a good effort from team Enigma, not great but it doesn’t stink up the desktop either – just don’t expect it to be winning any Purple Hearts or Victoria Crosses.

War Leader’s Clash of Nations is good for an armchair general who likes his history rewritten in biro, but for someone who enjoys a fancy quill then you’ll likely get bored with the lack of strategic depth through the campaign world. Battles can be fierce and lively with bombing runs, aerial dogfights, naval bombardments and tanks squaring off, which is probably the better half of the game. It’s a good effort from team Enigma, not great but it doesn’t stink up the desktop either – just don’t expect it to be winning any Purple Hearts or Victoria Crosses.

Crushing Paris in the name of, er, peace, liberty and more affordable wine for all Europeans. 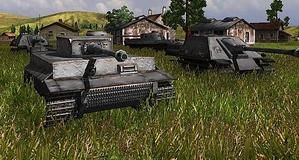