If Tin Woodsman was a video game 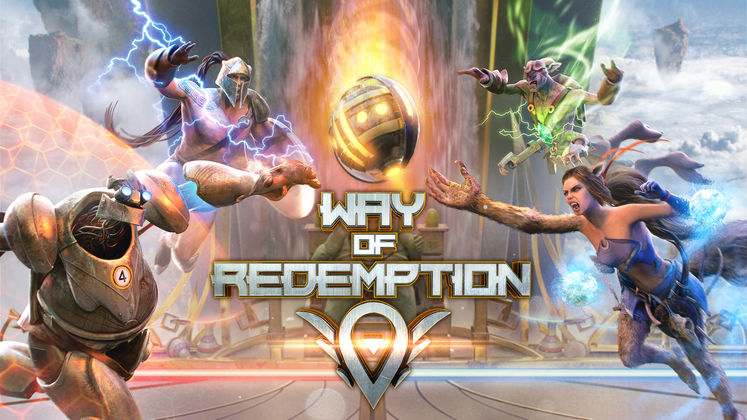 You know how so many beloved indie titles get away with not being as polished as AAA releases because they have heart and charm? Way of Redemption can’t, because it doesn’t. This is a game that feels like it was manufactured to fit a checklist and template with barely any ideas of its own and absolutely no soul.

Way of Redemption is what the developers call a “Multiplayer Online Sports Arena”, a new-ish genre that evolved from MOBAs. The game’s description speaks of action packed sporting events, but really, it’s just tennis dressed up in a fantasy costume. The game is multiplayer-only and features PC and PS4 cross-play, which granted, is a plus. Gameplay consists of trying to destroy the enemy’s portal by throwing the ball at it, which you can catch mid-air, throw back, curve or lob. 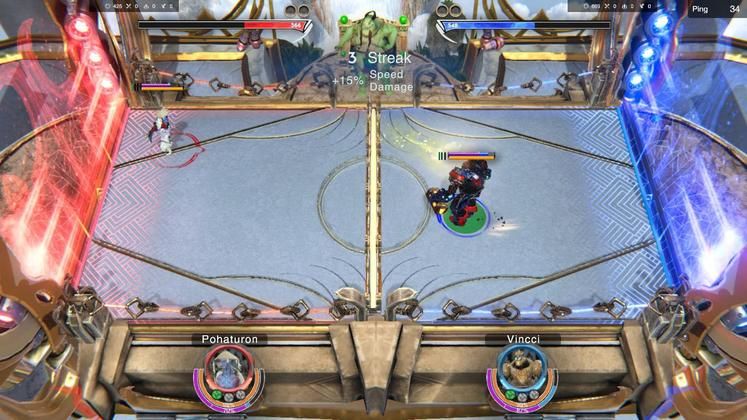 This already looks overly busy, and neither of us are using abilities

There are a handful of heroes to pick from, each of whom have a set of talents and abilities. Talents are passive stat modifying attributes you pick at the beginning of each round, while abilities can be triggered on the fly. Thing is, the talents barely have any impact on the game, and while most abilities are fairly well implemented, they still have less of an effect on the game than simply getting a lucky throw – unless they’re ridiculously OP. Way of Redemption has a long way to go in terms of balance, as Rynosuke’s offensive ultimate sees him replicate himself multiple times over and release a barrage of multiple balls which deals massive damage and is almost impossible to block.

There aren’t a lot of heroes in the game, but whichever one you play as still seems to not have too much impact, and the very limited application of abilities don’t really necessitate you changing playstyles to suit the heroes. They’re mostly drawn from various historical mythologies, while a few are original characters – though one is obviously heavily inspired by the Protoss from StarCraft, to the point of one of his abilities being deploying an honest-to-god Pylon.

Beyond this, there isn’t much to the game itself – there are two “maps”, which basically only affect the visuals of the playing field, save for one feature on the second map where walking over glowing semi-circles etched in the floor will raise a temporary shield over your portal. I only realised this by accident once, since the screen was filled with so many flashy colour effects that I didn’t realise the ground glowing meant something. Nothing is well conveyed in the game, and it also lacks any kind of practice mode or playable tutorial. Clicking on the “tutorial” in the main menu will just open your browser to a YouTube video, likely to save the devs having to program any kind of AI. 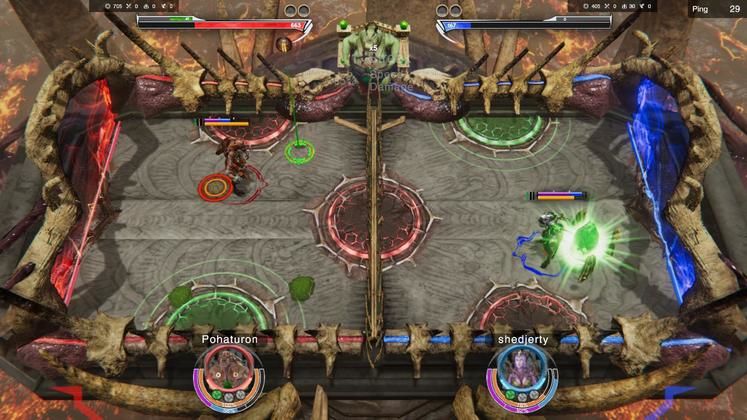 My Life For Aiur! Wait… what?

Now, Way of Redemption is intended to be an e-sport, and it really feels manufactured for this kind of streamer-bait sensation the developers want to force it to be. This is really apparent through and through, with the game being set up as a sporting event, the MOBA influences, the loot-boxes – because yes, this thing has loot-boxes – and customizable hero skins. They try to go down the sensationalist route in their presentation as well, with each match being prefaced by a countdown and “go” being replaced by “redemption”, which being the goal of the match doesn’t make much sense.

Way of Redemption is something I’d assume an AI would develop if you plugged in a typical e-sport requirement checklist and selected the “fantasy visuals” option. It feels threadbare, unoriginal and without heart. From a technical point of view, there is nothing wrong with it – it’s well optimized and cross play is neat, as we mentioned before. However, you can’t manufacture an e-sports sensation, these things evolve on their own, and even though these typical motions of sporty announcing and hero skins are there in all the big name titles, that isn’t what made them popular. Players are drawn to the soul and unique identity of games like League of Legends or Overwatch, and Way of Redemption falls way short in that regard. 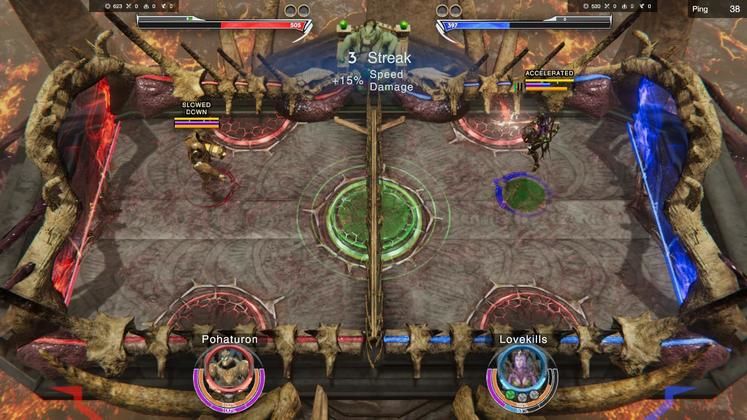 This map seems to be some representation of hell, whereas the other evokes heaven

Even looking past lofty speak of heart and passion, the game gets boring and repetitive really quickly for having so little substance. If it were fun at least, the lack of originality wouldn’t be as much of a deal breaker.

Way of Redemption is all there technically and functionally, but it’s empty and short on content. Every moment spent playing, the obviousness of it being an attempt at a forced e-sports success hangs over the experience, which is pretty dull to begin with.

For all its flaws, some of the ultimate abilities are pretty neat. As OP as it is, that offensive ultimate from Rynosuke is pretty impressive to witness – granted you’re not on the receiving end. 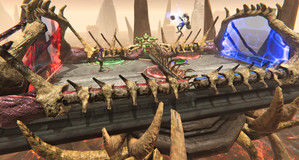