Way of the Samurai 3

Way of the Samurai 3 Review

More than a load of old Bushido

If you can bear with us here, Way of the Samurai 3 is actually the next entry in the series for PC, whilst also being the predecessor to Way of the Samurai 4 which released late last year, with both games being ported from Sony’s crusty PS3 console thanks to Japanese curio specialists Ghostlight. Cast as a half-dead samurai on the losing side of battle who awakens in its aftermath, Way of the Samurai 3, much like all the other games in the series thus far, is an affair which prides itself on almost boundless player choice whilst imbuing it all with a distinctly Japanese sense of humour. 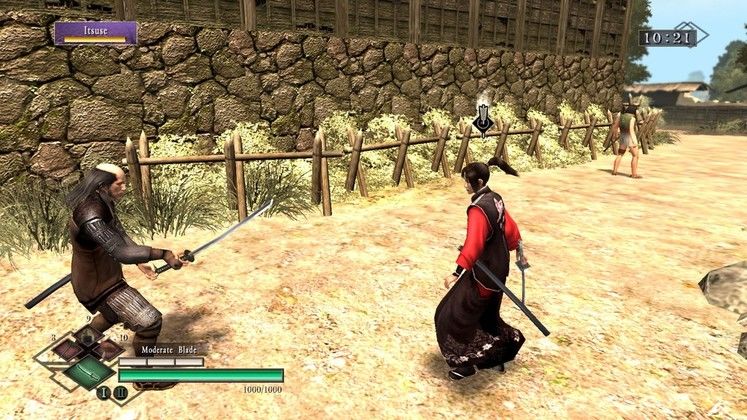 Frequently using a particular weapon will make you more efficient in combat when using it, granting additional moves and damage as a result

Again similar to the previous release on PC, Way of the Samurai 4, freeform third-person action adventure beats are played out against a historical backdrop. Eschewing the foreign invasion storyline that served as the narrative backbone for Way of the Samurai 4, its prequel instead looks to the inter-clan warfare and disputes that defined much of Japan’s tumultuous history long before the first western foot ever struck the sand of its shores. The upshot of this is that by plonking the player slap-bang in the middle of a clan war, Way of the Samurai 3 weaves a far more traditional tale that captures the essence of the samurai stories of old all the while enabling the player sufficient freedom to guide events however they see fit.

Speaking of such events, each playthrough of Way of the Samurai 3 takes place against a fixed number of days before it concludes with one of the game’s twenty-two different endings being triggered depending on the actions taken during that time. Imagine Groundhog Day crossed with Akira Kurosawa’s Seven Samurai and you’re not far off. An action adventure that combines sophisticated combat, branching narrative choices and dialogue against the romantic backdrop of Japan’s Sengoku feudal period, many fans of the franchise have argued that Way of the Samurai 3 represents the apex of the series so far. Based on the evidence that we have in front of us, it’s an assessment that proves difficult to disagree with.

From the outset, if you’ve not played a Way of the Samurai game before, a handful of nagging frustrations immediately set in. For starters, there is no minimap or waypoint-based UI whatsoever which means that you must constantly switch to the map screen in order to orient yourself towards your next objective. Of equal annoyance is that the tutorial is actually doled out to the player via an NPC who you meet very early on in the game. This proves to be a somewhat clumsy solution because the game allows you to interrupt dialog scenes with an attack or submissive motion depending on how you wish to play your character; I actually missed out the tutorial lady entirely because I didn’t let the dialogue cut-scene run its course. Consider this a forewarning for anyone playing this for the first time. 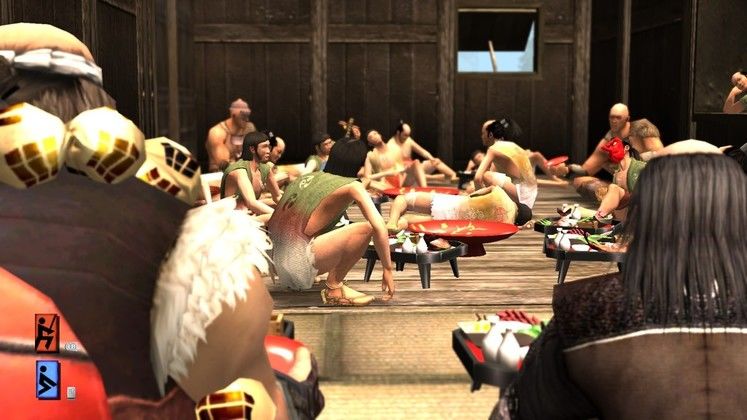 Those Ouka Clan lads sure know how to throw a party

Once into the game proper, the story wastes no time in setting up the three opposing factions of the oppressing Fujimori Clan, the anarchic, yet free-spirited bandits of the Ouka clan and, of course, the villagers of Amana county who find themselves caught in the middle of the strife generated by the conflict. From here, players can opt to choose a side, or simply not pick one at all and just ride the conflict out, since Way of the Samurai 3 is as much about finding the place of your character in the world as it is being a part of the events that define it. Side-missions can be completed to earn precious yen that can be spent on new equipment or food to keep your health topped up, while the variety of such quests proves commendable indeed, ranging from using your sword to fillet fish for a samurai lord to finding the missing underwear of a village elder. It’s this sort of sense of humour which permeates Way of the Samurai 3 throughout too, with a deftly handled localisation effort providing some proper laugh out loud dialogue choices which in turn provide yet further levity to the game.

In regards to the game world itself, the entirety of Way of the Samurai 3 takes place within Amana, a fictional Japanese land and within its boundaries there are eight different villages, forts and other places of interest which may be visited. Though each small in size, they are pretty well stuffed with things to do. From the aforementioned story content (helpfully highlighted on the map with a blue exclamation mark) and side-missions, through to more romantic endeavours and other special encounters, seeing everything that Way of the Samurai 3 has on a single playthrough proves to be an impossible feat. Adding further depth is the fact that certain individuals, missions and encounters can only be done at certain times of the day which when coupled with the game’s twenty-two different endings, consolidates the fact that Way of the Samurai 3 is not lacking in longevity in the slightest. 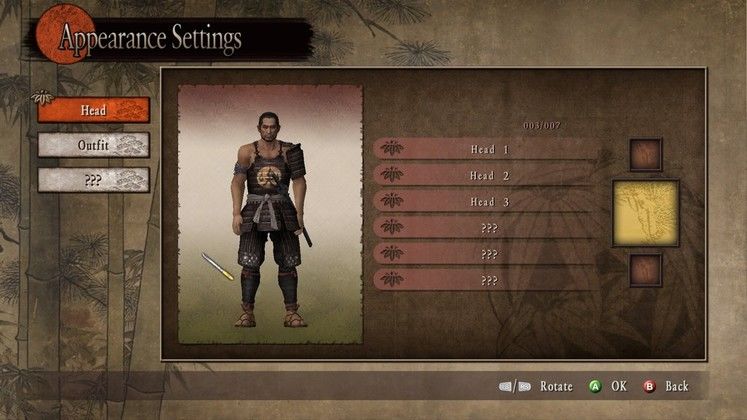 Character creation might seem a little barebones at the start, but the more you play, the more costumes, abilities and accessories become available to you

Of course, being a samurai, combat proves to be a big part of the experience and Way of the Samurai 3 doesn’t disappoint in this regard. With a multitude of different fighting styles and over one-hundred different weapons to learn and improve, the game’s timing and distance based combat system is both easy to get to grips with, yet pleasingly difficult to master with the game even allowing pacifists to use the blunt side of their blade to subdue their foes rather than put them down completely. This actually ties in into the essence of the game; you are a samurai after all and the more such good deeds you do, the more samurai points you accrue which can be spent on unlocking new clothes, abilities and other secrets. With all of your hard-earned items and weapons carrying over to the next playthrough and a veritable embarrassment of riches of stuff to do, Way of the Samurai 3 is one of those games that gets better and better the more times you complete it. 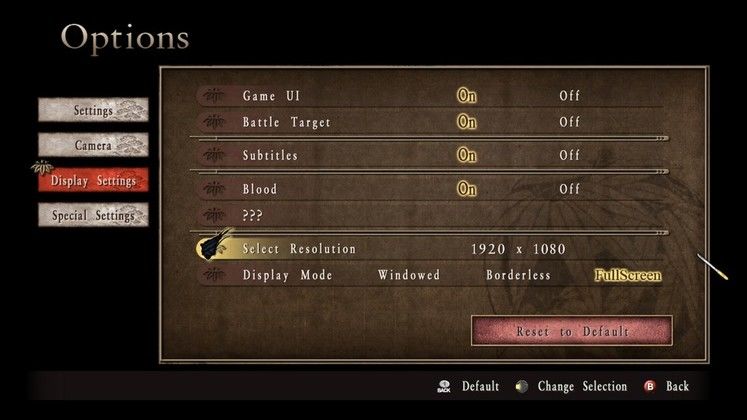 If the minimum requirements for Way of the Samurai 3 don’t tip you off to the game’s 2008 PS3 origins, then seeing the game in motion certainly will. With geometrically simplistic environments, low-poly character models, clunky animations and a less than ideal draw distance, it’s clear that the visual core of the game has not changed from its original release on much less capable hardware more than eight years ago. It’s a better looking port than the original for sure, but in the end that’s not really saying a whole lot. 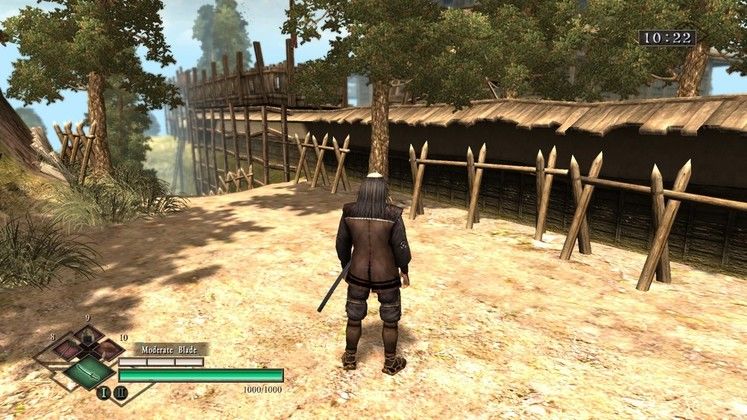 By inheriting the visual design of an eight-year old PS3 title, Way of the Samurai 3 is certainly not the best game to show off your blistering new gaming rig

Despite such a modest amount of rendering that needs to be done, the framerate is still far from consistently smooth with constant dips under sixty frames per second frequently occurring on my humble, yet up-to-task rig that packs in a 2.8GHZ i5 CPU, Geforce GTX 670 and 16GB of System RAM. Sadly, the extent to which you can spruce the game up from a visual standpoint remains disappointingly limited since Way of the Samurai 3 only allows you to tweak the resolution, screen size and nothing else.

If the visuals of Way of the Samurai 3 leave something to be desired than the audio presentation is ostensibly far down the other end of the scale. Featuring a wonderfully composed medley of Japanese folk strings, pan pipes and more besides, the soundtrack that thrums throughout each playthrough of Way of the Samurai 3 does a grand job of keeping you immersed in the game’s feudal-era set time period. It’s also worth mentioning that while the sound effects are largely functional, the voice acting is pretty accommodating; boasting both English and Japanese language with a variety of subtitle languages in addition. 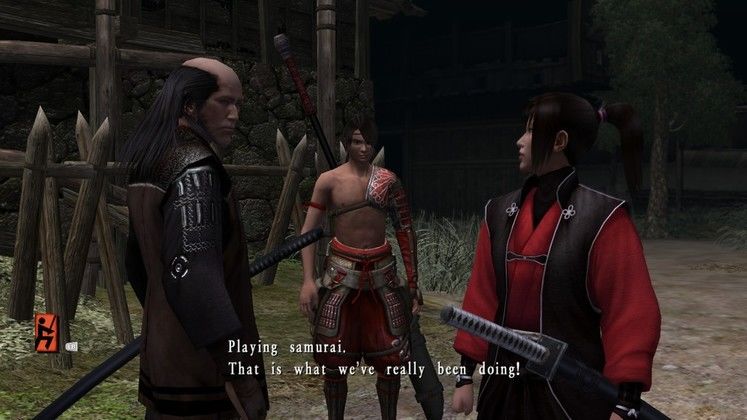 Way of the Samurai 3 is a game that comes from an earlier era; this much is obvious from its clunky visuals and less than well executed interface and menus. Peer behind such surface flaws though and there’s a highly entertaining action adventure here that deftly transcends the technical generation gap. 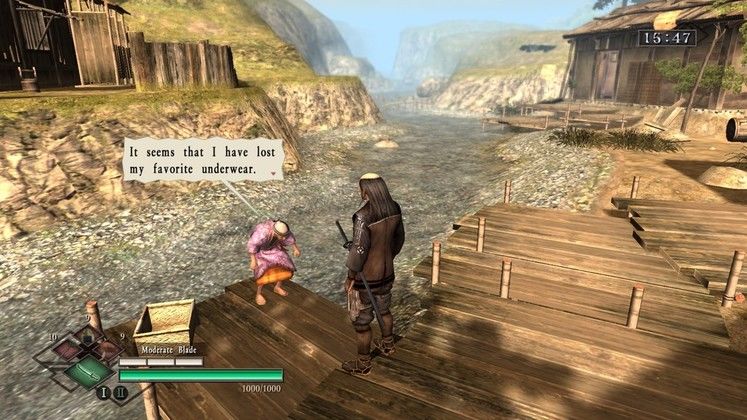 More so than the frankly silly amount of side quests, wealth of chance encounters and engaging swordplay, Way of the Samurai 3 does its best work when it just kicks back and lets you do whatever you like within its Groundhog Day style sandbox. Want to play a wandering pacifist samurai who never kills? You can do that. How about a bloodthirsty vagabond who interrupts conversations with his blade rather than his words? You can do that too and somehow, the game still manages to adapt its structure and funnel you down into one of its twenty-two different endings as a result.

A cleverly constructed effort that belies its humble early console origins, there will be some that bemoan the technical issues with the port but like a broken Katana they’re missing the point; Way of the Samurai 3 has player agency, longevity and entertainment in spades and soon enough such flaws fade into the background.

WAY OF THE SAMURAI 3 VERDICT

Like Way of the Samurai 4 before it, Way of the Samurai 3 isn’t much of a looker and arguably feels a touch dated when it comes to certain elements of its interface. Look past such concerns though and there’s a lot of enjoyment to be had. Generously stuffed with quirky humour, a real love for the period and more longevity than you can shake a bottle of sake at, Way of the Samurai 3 is certainly the best in the series and an easy recommendation to folks looking to lose themselves in a very different sort of adventure.

Way of the Samurai 3 Essentials 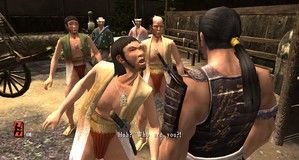