The best single-player FPS this year

It’s a sad state of affairs when the only significant AAA single-player shooters these days come from id Software properties. Whether it be Doom last year, or Wolfenstein this year, at least we’re guaranteed a quality FPS for the offline crowd at least once per annum. We loved Wolfenstein: The New Order and we’ve been eagerly anticipating Wolfenstein II: The New Colossus. Does it stack up?

Full interview with MachineGames Senior Games Designer Arcade Berg on Wolfenstein 2! Wolfenstein 2 Designer Explains Why The Single-Player FPS Is Dying After the events of The New Order series lead BJ Blazkowicz is injured but not beaten, much like the Nazis. They’ve conquered America, now it’s time for BJ and his Kreisau rebels to stir up a Second American Revolution against the Nazi Order and their American allies. And things will get very bloody indeed. 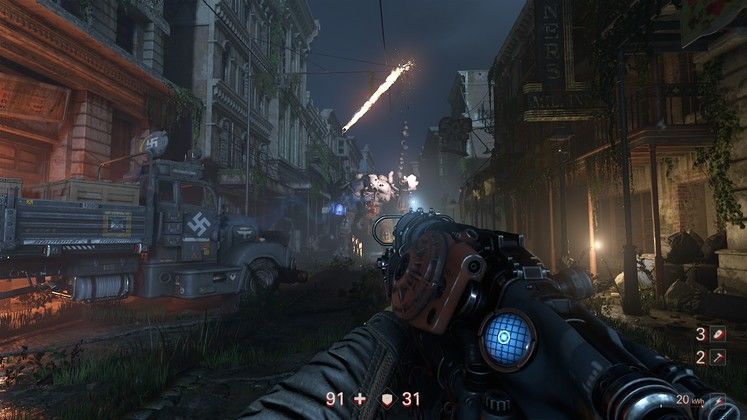 The writing in Wolfenstein 2 is uniformly excellent. Things get very dark indeed, but also very humorous and occasionally even wacky too, as MachineGames wisely balance the light/dark. The story goes to some truly unexpected places, literally and narratively, and I appreciate all of them, but it’s the sharp on-point dialogue that really makes the game stand out.

Sadly there are a couple of bad points about the story. Cutscenes are far more common than they were in The New Order, and they’re longer too. I’m not sure they’re always necessary either, as they’re often used to flesh out the (otherwise wonderful) cast of characters rather than move the plot along. Secondly, there is the slightest feeling that the story has been cut off. While everything here is satisfying [slight spoiler alert] the actual American Revolution doesn’t actually happen until the end credits. I was rather disheartened to discover that the launch trailer for the game consists mostly of the game’s ending. The fight to actually oust the Nazi regime from America won’t happen until Wolfenstein 3. 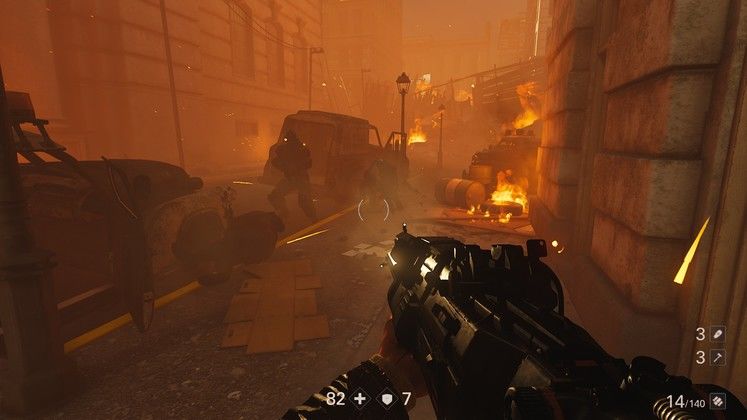 The levels are slightly disappointing too. Oh, they’re mostly excellently designed despite odd moments of getting lost, but it’s the variety I’m concerned about. Despite promises of fighting for American cities, with open areas like Roswell and New Orleans, there aren’t actually that many you fight in. The town of Roswell for example, one of the first areas revealed of the game, you don’t even fight in it – the Roswell level is Area 52, deep underground. The vast majority of levels are in stark, metallic enemy bases. They’re not drab or identical, in fact MachineGames do an awesome job of making each base and level feel unique, but… they’re still metallic Nazi bases.

Still, variety aside, the levels are fantastically designed. They perfectly go between intense firefights and quieter exploration moments, often allow for multiple approaches including stealth, and never get to a point where you’ll want to sit in a corner gunning down soldiers. And I’ve been a bit harsh on variety – it is still there, whether it be riding a fire-breathing Panzerhund, taking down a giant robot on top of a flying aircraft carrier, or sneaking around radioactive ruins with your health constantly dropping. There’s plenty of secrets to discover, too. 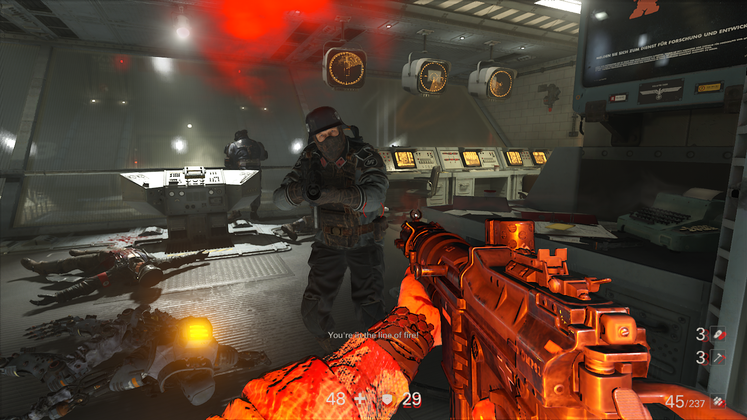 The actual combat though is straight-up perfection, which admittedly MachineGames reached in the first game but add to a little here. New enemies fit in well, and the AI certainly proves a challenge – if you do just sit in a corner with a shotgun and wait for soldiers to pile in you’re more likely to get a grenade or a Super-Soldier instead. Dual-wielding can be done with any weapon at any time, even Grenade Launcher/Pistol if you wish, and you can’t just wade in with a Heavy Weapon (like Chaingun or Laser) and be invincible. It’s all just supremely satisfying and will definitely offer a challenge at any difficulty.

Our test system was an AMD FX-6300 Six-Core Processor, 16 Gb RAM, Nvidia GTX 1050 Ti 4Gb, and Windows 10 64-Bit, and it ran perfectly with a mix of Ultra/High settings, with the exception of cutscenes which were occasionally choppy. Funnily enough even this system had trouble running Wolfenstein: The Old Blood, so we don’t know what MachineGames did wrong with that game but we’re happy they corrected it. 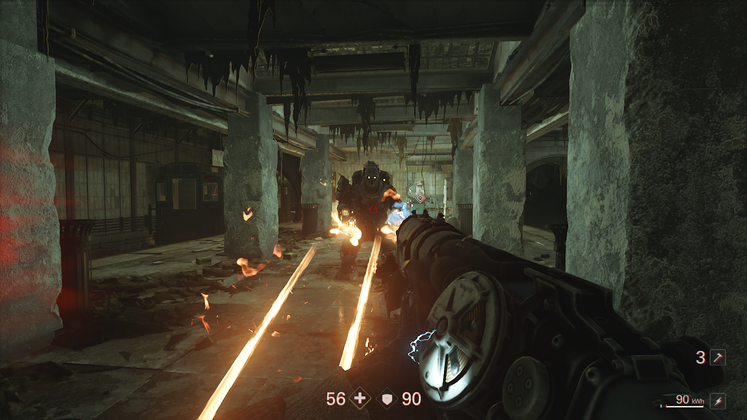 Suffice to say Wolfenstein 2 looks fantastic at all times, although admittedly there aren’t as many levels as spectacular as the Bridge level in The New Order. It looks great and is animated wonderfully, but we can’t remember a single time we said “wow” while playing, as least not in seeing something. If we have one more specific complaint about graphics options, it’s while there are many ways to customize visuals they are all rather confusing – why isn’t there a simple one for “textures” for example?

It seems like I had a lot of complaints about Wolfenstein 2: The New Colossus, which might make you think I didn’t have fun with it. I utterly did, at all times. I consumed every part of Wolfenstein 2 and I’ll definitely play it again, and after discovering the Enigma side missions I’ll probably keep playing it. It’s still easily the best single-player FPS of 2017. It only really disappoints in keeping so many levels indoors (I’m sure previous games haven’t done that so much) and in saving the actual revolution for Wolfenstein 3. Nonetheless I loved actually playing it. 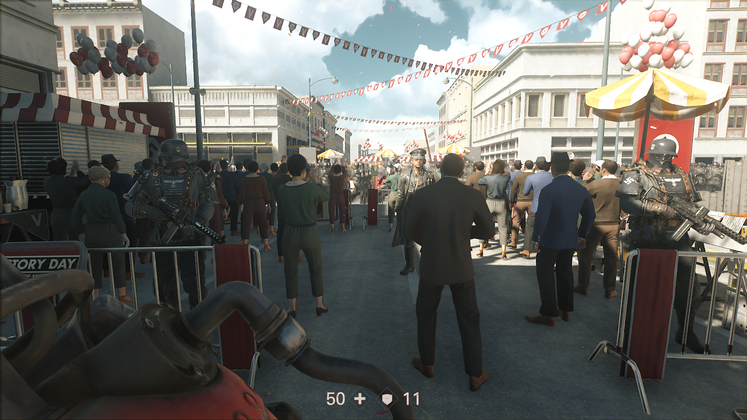 Wolfenstein II: The New Colossus is easily the best single-player FPS of 2017, but it has surprising problems. The story is great, well-written and well told, and goes to places both dark and humorous, but it leaves a lot left over for Wolfenstein 3. The levels are fantastically designed with many ways to approach them, but occasionally you’re not sure where you need to go and there’s often not enough variety in the levels – we’re not sure we want to see another metallic Nazi base ever again. And the combat’s just fantastic. We loved every moment of it and we’re certain we’ll want to play it again, but to be honest… The New Order was a little bit more satisfying.

See you in 2020 for the True American Revolution, kicking out the Nazis for good, and facing Mecha-Hitler properly this time.

A meeting with a certain famous Nazi movie producer (yes, NOW we decide not to spoil it…). 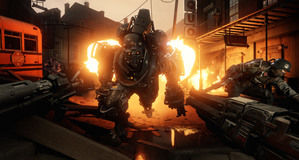