The year was 2002. It wasn’t just the year where The Rock fought Hollywood Hulk Hogan in a battle for the ages at Wrestlemania X8, or where Triple H returned from a debilitating injury to reclaim the undisputed championship belt, rather it also marked the last time a core entry in the WWE franchise managed to make it to PC shores. Now some thirteen years later the sweat, glamour and high-octane athletic theatre returns to PC and while the transition to the big leagues is certainly not without fault, the thrill of competing in the squared circle, especially among friends, remains steadfastly entertaining and largely undiminished all the same.

A traditionally big focus of the WWE 2K series has been to nail the WWE presentation and visual spectacle in each game that has been released. WWE 2K15 is certainly no different in this regard with a wide range of wrestlers that, for the most part, have been extremely faithfully modelled in addition to cinematic camera angles, dynamic commentary, glitzy entrances and a recreation of just about every other visual aspect that you can see in the real-life show. 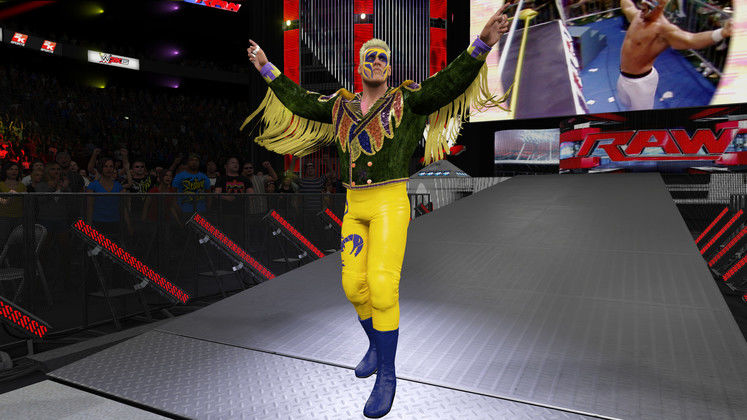 While not terribly up-to-date, WWE 2K15’s roster is extensive and includes a range of superstars from both modern and classic eras

Still, while developers Yukes and Visual Concepts manage to pull off a decent approximation of the real-life, body-slamming spectacle, it does fall short in a few areas. Chiefly, it’s in the superstars themselves where things get a little uneven as clearly some have had more attention lavished on them than others. On the one hand, marquee superstars such as John Cena and Randy Orton look like consummate depictions of their real-life selves, with brilliantly textured skin, intricate tattoos and incidental details that show everything right down to their unique imperfections. Others, however, have fared far less well.

Company chairman and all around head-honcho Vince McMahon for example, looks to have a pale, massively swollen mug that can only be explained by the WWE big wig having sucked on a lolly made of hornets. The divas too, are similarly afflicted with visages that don’t look much like their flesh and blood counterparts with jaws that open far wider than should be humanly possible and eyes reminiscent of somebody who has ingested far too much LSD.

Once past the presentation side of things and we actually get down to the business of wrestling, fans should be duly encouraged to discover that a pleasing amount of depth accompanies the in-ring action.

In addition to a variety of different grapples and strikes available to every wrestler, these are further diversified by additional holds that can be performed on the ground, against foes on the top turnbuckle, running grapples and many, many more positions besides. Furthermore, WWE 2K15 also allows a wide latitude for tactics too, with players able to target specific limbs and body parts to weaken their foes. Spend time working over an opponent’s legs and they will start to limp, affecting their lateral movement around the ring, while attacking their noggin will result in them becoming stunned more often with every move directed towards their skull. To say that combat WWE 2K15 is deep then, would be like saying Yokozuna enjoyed a pie or two back in the day.

In fact, the sheer number of avenues from which you can dispense violence is almost bewildering and in being so, offers a metric ton of fistic freedom that you don’t usually see in more po-faced beat em up efforts.

Compounding what is already a hugely sophisticated combat system is the game’s countering mechanism which allows players to turn the tide on just about every move in the game. In actual fact it’s the countering system that serves as the backbone to WWE 2K15’s pile-driving shenanigans since once players have gotten the timings down (a handily toggled on-screen prompt helps with this), matches invariably turn into true back and forth affairs that do a good job of emulating the sports entertainment brand at its most entertaining.

Speaking of back and forth, sitting atop WWE 2K15’s deft combative idiosyncrasies is a momentum and stamina system that really requires players to think about more than just how hard they intend to jam the head of their opposite number into the canvas. 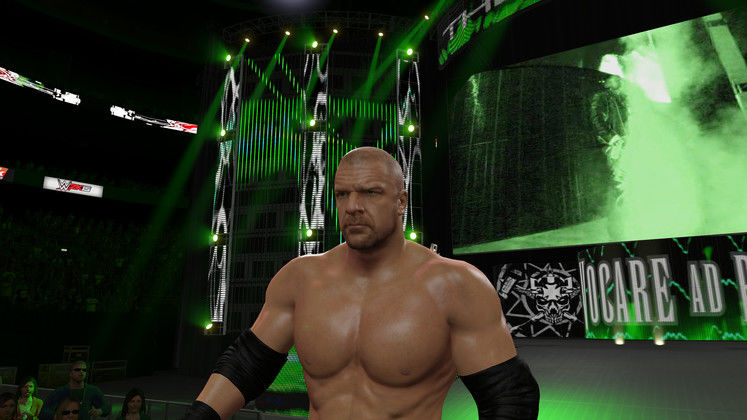 The former is a system which controls the access players have to super-damaging signature and finishers to manoeuvres and is dictated by the actions that are performed during the match. From offensive moves to successful counters and taunts, the meter eventually increases to 100% whereupon signature moves becomes available with ultra-devastating moves becoming available at 150%. How the countering system cleverly plays into this though, is if a player with little momentum manages to counter the signature or finishing move of an opponent, they receive one in return which in most cases can result in snatching victory out of the jaws of defeat. To say it’s properly enthralling stuff when it happens would be something of an understatement.

The stamina system on the other hand, educates players on the virtues of not bodyslamming other folks so much that you can barely walk yourself. As one might expect, the more stamina you have the more moves you can pull off and the more freely you can manoeuvre yourself around the ring and ringside area. A low stamina meter, however, invariably results in sluggish movement and your chosen mound of muscle wheezing and dropping to their knees after even the most basic of attacks.

Like the momentum system before it, the stamina meter adds a welcome wrinkle to the proceedings as it forces players to think about how much energy they expend with every action and thus, plan their attack strategy accordingly. It’s a system that represents itself in other, more cinematic ways that befit the WWE spectacle too, as an exhausted wrestler who attempts a pin after unleashing a devastating slam, will slowly crawl over to his prone foe and wearily drape an arm across them rather than attempt any sort of spirited pinfall.

Elsewhere, a chain wrestling system is also in place in which wrestlers ‘test’ each other out with different amateur starting holds, but really, it’s a largely forgettable addition that doesn’t add much to the game. Luckily, another strength of WWE 2K15 is just how tweakable everything is; from the momentum system and stamina meters to the damage that moves deal and the duration of the chain wrestling phase, WWE 2K15 has simply too many adjustable parameters that can be adequately covered here.

It’s not all gravy and protein shakes though. While the game has boatloads of wrestlers, modes, match types and stuff to fiddle around with, the single-player stuff is a mixed bag. MyCareer is a relatively dull journey to the world title that is blighted by repeated feuds that don’t make any sense and a general lack of interesting stuff to do. Where conversely, the worthwhile single-player stuff lies in the game’s WWE Universe which lets you tinker with parameters and rivalries and the 2K Showcase mode which lets players relieve certain classic rivalries and classic matches with the full WWE presentation.

More problematic is that for WWE 2K15, the previously formidable creative suite has been massively scaled back to the point of comedy. Create a superstar is now horribly threadbare compared to previous years; divas can no longer be created at all, there is no longer a create-a-story mode (one of the main draws of the previous games on consoles) and really, in this sense, WWE 2K15 feels like a big step back from what we’ve seen before. 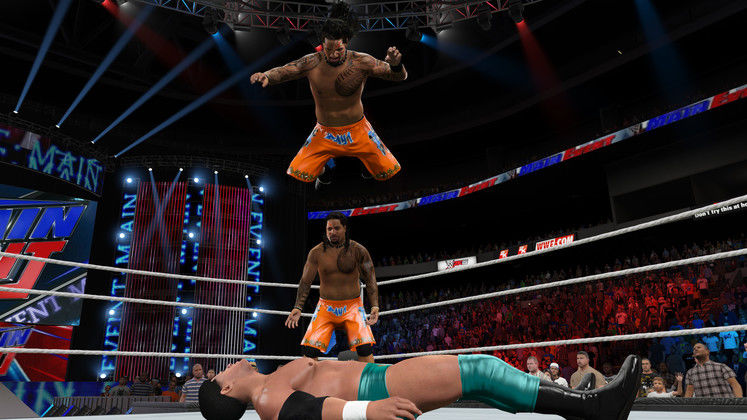 Also troublesome are the glitches, bugs and generally poorly optimised performance that plagues WWE 2K15 from time to time. From ropes disappearing and then reappearing halfway across the ring during replays, character models that occasionally glitch through the ring and framerate haemorrhaging entrances, it’s clear that like an NXT rookie, WWE 2K15 needs some more seasoning and polish before being allowed onto the primetime stage.

Still, the technical shortcomings that threaten to tarnish the return of the WWE license to PC aren’t enough to properly diminish its multiplayer appeal. This is especially true when taken in a local context since couch multiplayer on PC is exactly how WWE 2K15 should be played and in this, the game can provide a near endless run of hilarious, yet competitive matches that should be a multiplayer mainstay for a good long while. Sure enough, the game has an array of online multiplayer modes but, really, local multiplayer is where it’s at.

Unlike the game’s release on consoles, the presence of mod support means that WWE 2K15 will actively evolve over time on PC. Until the mod community flourishes however and assuming the game’s rough edges prove tolerable, WWE 2K15 remains an enjoyable wrestling yarn the likes of which PC players haven’t been graced with in, well, forever. Maybe not the best there was or the best there is and certainly not the best there ever will be then, but it’s a good start all the same and after all, legends have been fashioned from less.

Catching an opponent leaping off the top turnbuckle with a picture-perfect, ring-rumbling RKO. 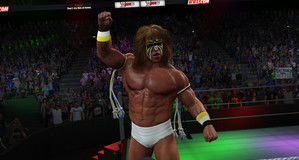