Yooka-Laylee and the Impossible Lair

Yooka-Laylee and the Impossible Lair Review 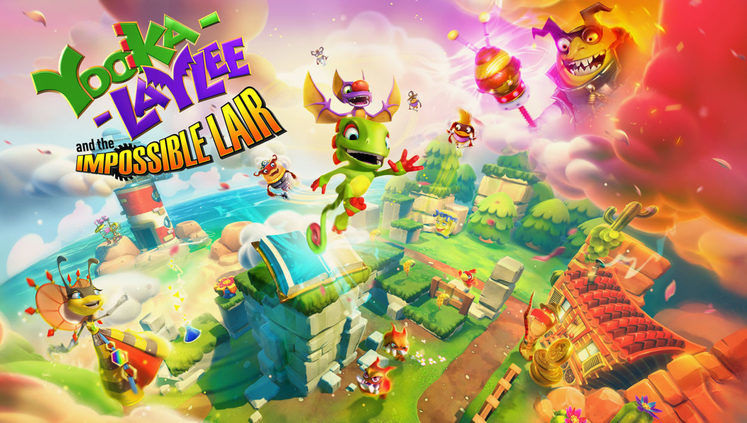 I never played Yooka-Laylee. That might be a weird way to start a review for its sequel, but it doesn’t make me worry. There was so much discussion about the first game’s kickstarter and its mixed reception that it can discolor reviewing any game after it. I missed most of it (Spyro is the 3D platformer of my childhood), so I don’t have a real bias regarding this series. It’s also a radically different title than the first one, being a 2D platformer in the style of Donkey Kong Country instead of a collectathon. Thus, you don’t need the background of the first game to dive into this one. Does this make me the perfect person to review Yooka-Laylee and the Impossible Lair, the truest bastion of objectivity? Definitely not, but let’s pretend I am so we can start talking about a game that is surprising in ways you wouldn’t expect.

The game starts with Capital B, the first game’s villain, back with a mind control device (the Hivemind) to take over the Royal Stingdom. With this new device, he plans to capture Queen Phoebee’s people (or should I say beeple?) and take over the world unless Yooka and Laylee can stop him. This is a narrative chockful of puns and dumb jokes. It’s definitely the worst part of the game even if it’s harmless in the long run. Instead of charming, it comes across as tryhard. It doesn’t ruin the adventure outright though there are times you’ll roll your eyes. The story isn’t the focal point, that’s a given, but it’s hard to completely ignore. Luckily, this dissolves away when you actually play the game.

Thanks to the 2D platformer being one of the most well-known genres of game, it’s self-explanatory. You jump around, beat minions, and go through obstacles to complete levels. But what makes a platformer special is it how you move. Rolling plays a huge part of Yooka’s skillset, letting him jump farther thanks to the added momentum. Add this with Laylee’s help by means of a short spin, and you get a skillset that’s fun to learn. The moment you master going from roll to jump to spin is exhilarating. This is helped by the level design. It pushes you to try to collect everything, to challenge yourself to get those trickier collectibles with the skills you have. 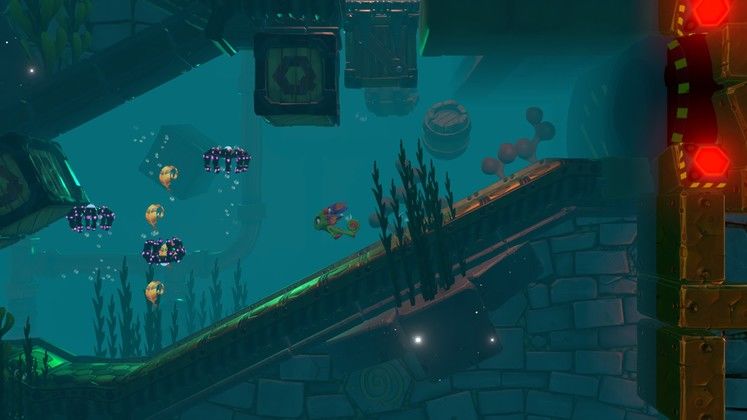 The Impossible Lair is great at blending shortform and longform challenges. Each level comes with not only with a bee to save at the end, but also five T.W.I.T. coins to unlock more levels blocked by paywalls (which is probably the funniest thing in the game). There are also special feathers that require platforming finesse to get a huge bonus needed to unlock tonics and other items. I’ve died many times just for the sake of getting a single coin or feather bundle, and those moments you win are not just desirable but well-earned. Not just because of its difficulty, but how it deals with accessibility.

Accessibility is the name of the game. Thanks to the game-altering tonics and an optional skip feature, even the trickiest levels are completable. The tonic system is ingenious too, rewarding you with more feathers in a level if you choose tonics that make the game harder and granting you less if you enable ones that make it easier. It’s all about risk and reward. This is shown when you get hit too, giving you a chance to save Laylee from leaving the screen and keeping your abilities. It adds a great dynamic to play, making you decide whether or not it’s worth trying to save your buddy in your current situation. This accessibility doesn’t replace skill. You might be able to finish a level, but there’s an elegance required to beat one and grab every T.W.I.T. coin. It’s a tricky balance but Playtonic nails it. 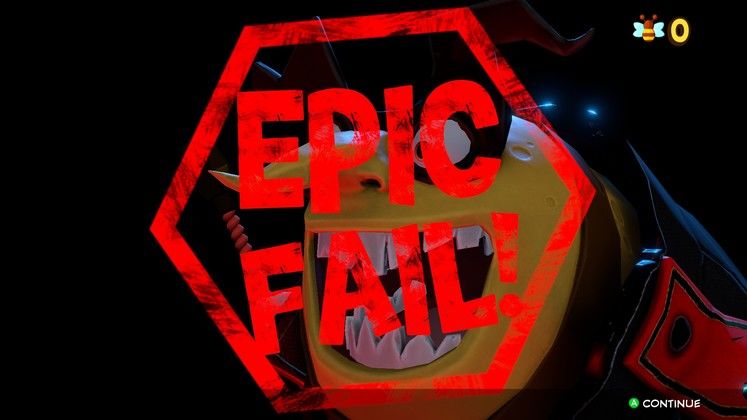 Rather than the game leading to a final boss, you are always given a chance to delve into its namesake: The Impossible Lair. Made to be full-on platforming hell, it is worthy of its title and incredibly difficult. But each level you beat gives you a member of the Beetalion, acting as an extra hit during this arduous level. It can be possible to win (in theory) without any bees and it can be attempted as many times as you’d like. It’s such a unique way to deal with challenge, giving hardcore players something tricky whilst giving rookies a fighting chance after enough practice.

When you aren’t in the levels, you are taken to the game’s 3D overworld. Here, you can find the next level, find the tonics, and solve small puzzles. It’s filled with content, such as small one-screen challenges that let you change the overworld. This overworld also lets you change the levels. If you do tasks in the world, you gain the ability to make an alternate version of a level. These changes, such as flooding a level, might not seem like a big deal. However, these alternate levels really like playing around with their added gimmick. It’s not just a level with a new paint job and forces you to step up your game. The problem with the overworld is its disconnect. While the change isn’t a bad idea, the control scheme is more restrictive. It doesn’t train you for the levels, especially with its warp function. It’s not offensive and gives players a moment to breathe and explore, but it’s not as fun as it could be. It wouldn’t be possible to do the alternate levels in the same way with a simple level select, so I won’t hold it against the game too much. 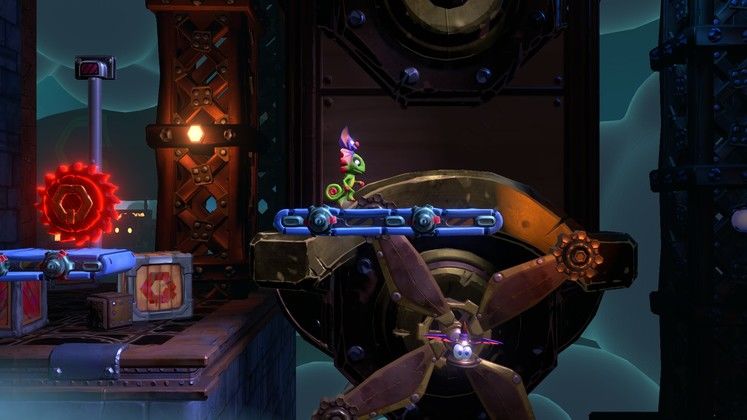 Much like the previous game, the Impossible Lair is the type of bright colorfulness you would expect from a Rare spiritual successor. The tone and art design is perfect for this game, being bouncy and joyous. Even with lackluster writing, there is a real pleasure to how the worlds are formed and made. It also runs pretty nicely to boot, making it certain that you can’t blame the game when you fail. But where this game shines the most is its soundtrack.

While game music has been acceptable this year, it’s not often I stop and pay full attention to it. The Impossible Lair has been my exception. With compositions by beloved composers David Wise and Grant Kirkhope alongside some great stuff by Dan Murdoch and Matt Griffin, it’s a perfect encapsulation of how this sort of platformer should sound. I definitely have to give props to Matt Griffin’s work on Windmill Way’s Windy theme. It’s an exceptional song that really gets you in the mood to deal with its new gimmick. 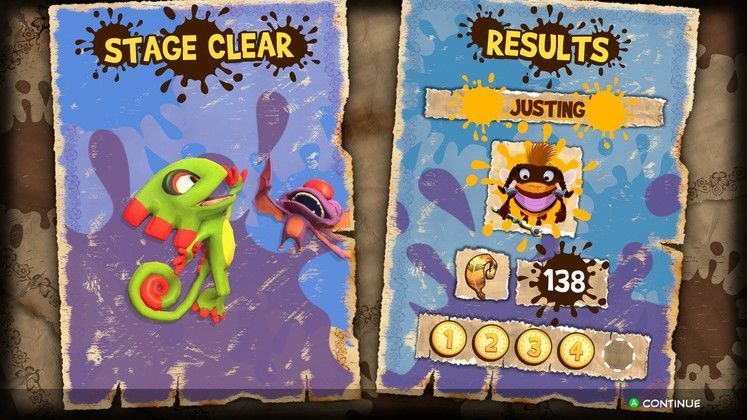 YOOKA-LAYLEE AND THE IMPOSSIBLE LAIR VERDICT

Thanks to its tough-but-fair challenge, Playtonic has made a very rewarding game. There are moments where I had the realization I was having full-on fun, smiling all the way, and that never happens. Its writing might be obnoxious at times and the overworld can be superfluous, but its foundation is so well constructed that it doesn’t distract from the game proper. It might take awhile for it to click. But when it does, you’re gonna have an enthralling time. Hell, I’m going to go play more of it now that I finished this review.

Going through Urban Uprise. Its killer theme with very satisfying platforming makes for a wonderful level.

Yooka-Laylee and the Impossible Lair Essentials 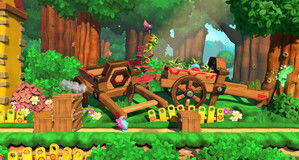