The Dark Knight gets PhysXal..

Best Batman game ever or a Joker in the pack?

Superhero Batman doesn’t need an intro. A very rich businessman who has made himself into something extraordinary, using his intelligence, detective skills and with the help of some exceptional gadgets. But, Batman isn't a man with supernatural strength. He can't fire lasers from his eyes and he doesn't have the ability to fly or shoot spider webs from his hand. He's a man of flesh and blood, who uses his smarts to find clues at crime scenes, uses gadgets to analyze the environment in ways normal men can't, fights with the skill of the best martial artists and prowl in the shadows like an invisible man. And, these all had to be part of Arkham Asylum in order for the game to be a true Batman experience, and it is. No game before has let you step into the shoes of Batman like this.

The game starts with a very exciting and attention keeping plot and story that was written by the actual Batman author Paul Dini; who is the writer of Batman : The Animated Series. So no wonder the game has some actual plots and story that make it feel a lot more than a simple single player third person game. The story itself will drive you so deep into the game; that you won’t feel like giving it a rest. Let along the all other extraordinary things you get to do in the game.
The gameplay begins and you are straight into actions. Joker escapes from the Arkham security custody and takes over the Iceland by releasing and stirring all the prisoners from the jail. In a matter of one very small mission the whole area goes under his control. And, the more you walk into the game, you realize that the Iceland is not only under his control but also been staged to kill Batman and eventually taking over the Gotham city. Joker invades the medical facility to gain access to a research facility; which can alter an average thug into a huge hulk sized beast. So, as a Batman you get straight into business. Finding Joker and rescuing the Iceland. Sounds like an easy job for a superhero, isn’t? Unfortunately everything goes the other way.

Batman doesn’t use any weapon. His strengths are his hand-to-hand combat expertise, using the right gadget at the right place and extremely good stealthiness. When you are into any hand-to-hand combat with thugs surrounding you from all the corners, all you need to do is hit the action button and direct Batman’s movement at the proper direction. There are varieties of thugs that will surround you and you will need use appropriate combos for each type. Thugs carrying a knife will block most of your hits unless you use what’s necessary to take him down. And, you won’t stand too long unless you do it properly. This is what makes the combats system of this game so realistic and exciting. While punching one infront of you; you’ll have to leave back punches to the guy right behind and immediately through the batrang at the guy nearby; then finish the guy infornt and this goes on. Combats will be getting more and more difficult and tactical as the game progresses and as there will be varieties of thugs to attack you, you'll need to use different tactics on each if you're going to fuel your combo meter and take them down without being hit. Fighting becomes more interesting when you are in the middle of boss fights. You’ll often need to use their strengths against them in some way. And, without being tactical and sharp; it’s indeed too thorny to overcome them. Scarecrow is also worthy of a special mention. Plots with him aren’t in an ordinary situation. You are driven into a "don't get caught by the spotlight" gameplay and time to time fighting with the armed skeleton army while staying under that shadow. Timing is everything when it comes to defeating the Scarecrow.
Before assessing into any situation, Batman's main tool is his detective vision. An improved viewing mode that highlights key objects that can be interacted with and location of the enemies. You’ll be able to locate their positions even if they are on the other side of the wall and identify who are carrying weapons and who aren’t. You’ll also be able to check their heart condition; which I think is an incredible addition to the game. By analyzing the area and thugs guarding it you'll be able to plan your attacks, whether it is a straightforward assault through the front door or a more considered series of stealthy swoops down from the rafters, dispatching foes one at a time. As you carry some extraordinary gadgets with you, the game officers many ways to conduct your clashes with your enemies. For the most part stealth is handled really well, but from time to time evading enemies can cause a few problems. Batman isn't able to jump at all times, with a single button having different uses depending on the position he's in and this can be annoying time to time when you are in complex situations.

There are some upgrades to Batman's tactics, his weapons and gadgets as the game goes on and awards are earned. These upgrades and gadgets are available throughout the game. Batarang is the first you'll get your hands on. It’s good for momentarily knocking down enemies and cutting down objects that are out of reach. Later on you'll be able to upgrade it to get hold of Sonic Batarangs; that send thugs off searching for them, and multi Batarangs that allow Bats to target numerous enemies at once. Towards the end of the game you'll have so many gadgets that you won't even use.

The environment design of the game is something that will definitely make you feel contented. Arkham Island is an incredible place to roam around and the characters are highly detailed and responsive. Details like moving fog, sheets of plastic and broken tiles that slits when something smash into them. Some of the minor characters such as guards do have some bug eyes goings, but it's not too bad. The sound effects are all very satisfying too. The only part of the sound I would criticize would be the dialogs. At times they can be very recurring. But both the graphics and sound are good enough to give you a movie like feeling. Mark Hamill as The Joker gives his usual incredible in depth performance. Kevin Conroy as Batman from the Animated Series is also here, bringing the dark knight to life.

You’ll feel dissatisfied once the game ends. Not because you didn’t enjoy playing it but because you can’t have more of the game. Though there will be more to see and do even after the game ends. Tons of collectable items to find that will keep you exploring for ages, with Riddler trophies, inmate interviews and more. There's also a set of challenges that test your combat and stealth skills, with scores registered on worldwide leaderboards for all to see and compete against. These challenges will take some good amount of time for you to top the leaderboards and if these aren’t enough; Eidos has already released a free add-on pack for you.

Batman: Arkham Asylum is everything you'd want from a Batman video game, giving you the chance to become one of the most popular super heroes of all time and introducing you with all the characters of this series. There are a few niggling issues, but nothing that gets in the way of what is undoubtedly one of the best games of 2009.

I got this on DVD-Rom to avoid some hassles, and well - seriously - lets face it - STEAM cost a whopping 25% more then the DVD - and that is being nice to STEAM....
The game? Well it is fantastic, especially (and this is important) if you like Batman. Then the game is just incredible, after seeing the Batman franchise first getting the royal dork treatment and then Bale started the renewal - this game shows that Batman is the best hero of them all. The gadgets are fun to play with, the fighting easy to initiate and battle but not hard to control - it is a show to watch and marvel at. it doesn't have to be Street get-your-re-n00bed-ass-kicked-at-easiest-level-go-and-die-of-shame-in-the-corner-your-mouseandkeyboarduser-assFighter IV to be fun. Batman AA is giving you adrenaline filled action where you time the buttons hit/kick/flip/elbow-in-the-teeth/sedate and the block buttons and sometimes you flip the cape or do a take-down stunt. Enough so you can marvel and enjoy the flipping kicks that turns Batman into a nightmare of hellish combos and whoop ass hero that he should be. Love it!
The puzzle solving is OK, not too hard and not to easy. Some are challenging enough and some are easy. High and lows. Balanced and OK IMO.

There is a big flaw though, and that is the SecuROM shit that comes with the game. I couldn't install it because it kicked off the DVD reader one third into installation and I couldn't re-install until I had gone detectived my ass out on the Internet, did some Reg-edit and holy reg-edit deleted some shit and tried again, and again an again and finally did the same thing as with the SecuROM infested storm of Zehir DVD - copied it to hard drive and installed it from there. Worked.

Man, such a great game and such a fakking hassle to get to it. The SecuROM issues gives this game with the Xboxy/consilly over-friendly controls and dated PC setting for chaining and controlling them a 8.8/10 from me. Good controls and no SecuROM shit would have raised it to 9.7 easily because this game is fun to play and very rewarding for the Batman fans out there. 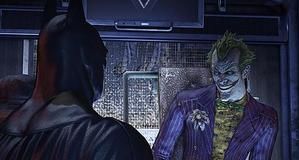 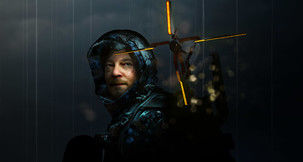