The islands of the Pacific are ready for their Battlefield treatment.

Many were upset to learn that the once promised deal of receiving a copy of Battlefield 1943 if you bought Battlefield 3 for PS3 was not honoured, but now EA is offering PSN codes.

In Europe this November 26th BF3 players can claim their free copy of BF1943, with the US on December 10th, with Asia and Japan December 17th. EA outlines how to claim.

Electronic Arts is being hit with a class action lawsuit for reneging on the promise of a free copy of Battlefield 1943 in the PlayStation 3 version of Battlefield 3, as announced by Sony at E3 2011.

The PC version of Battlefield 1943 has been officially canceled, with the developer DICE moving on and focusing on completing Battlefield 3. 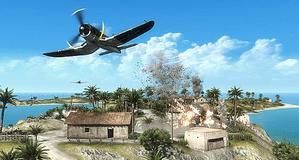