DICE's Patrick Bach confesses that the very thing most people love about Battlefield: Bad Company is also keeping it from being greenlit another instalment. Its more humorous approach holds it back from mass market.

Bach reveals they "got a lot of criticism" for not being serious as humour is "very personal," and the mass market cares not for laughs. Naughty Dog's Uncharted 'found a way'.

It seems that DICE has abandoned the Battlefield: Bad Company series, as the studio is busy with three major projects including Battlefield 4 (and its downloadable content), Mirror's Edge 2 and Star Wars: Battlefront. Executive producer Patrick Bach claims, however, Bad Company has not been forgotten. It's just not being developed right now.

Those misfits from Bad Company aren't getting a sequel anytime soon as EA confirms that they "don't have it in active development," but are instead all about Battlefield 4 this year. The last entry was in March 2010.

Bad Company offers a lighter toned Battlefield with plenty of comedic banter between the squad. Multiplayer from Bad Company 2 led the charge for a long-time before Battlefield 3 showed up. 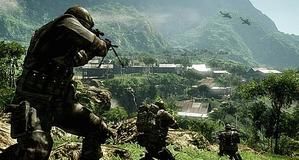