Rebellion has announced that it will release Battlezone Gold Edition for the PlayStation 4, PC and Xbox One on 1st May. This was originally released as a VR title, but with this Gold Edition it will now be fully playable without it.

Rebellion's Battlezone VR Lead Programmer has worked in the industry for 16 years and believes that "they aren't ideal for anyone" but are still needed.

Unlike Sony's unruly grasp of exclusivity when it comes to cementing Resident Evil 7's VR mode to their PSVR platform until sometime next year, BATTLEZONE hasn't fallen victim to the same lengthy fate.

Battlezone is the VR-focused remake slash reboot of Atari’s vector graphics arcade classic. The developers at Rebellion let loose a few more details today of what to expect from the new title. 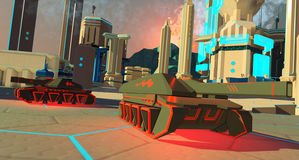