Blur crosses the line between kart and sim racer, but does it remain just as exciting? Read our review to find out! (PS3, Xbox 360, PC)

Former Bizarre Creation design manager Gareth Wilson thinks that the next generation of console will be the "savior" of the racing genre.

Evolution feared MotorStorm: Apocalypse spelled the end of the series

Evolution Studios dev Matt Southern admitted that MotorStorm Apocalypse's commercial failure would have spelled the end of the offtrack racer series - not to mention the closure of the studio - and commended Sony for sticking with the series.

Activision Publishing CEO Eric Hirshberg says Bizarre Creations' signature "is in the racing world," which is a declining videogame genre they concluded.

The decision to close Bizarre was "as much to do" with that shrinkage than "anything specific to Bizarre." It was no longer worth their "competitive energies."

Three former Bizarre Creations big wigs have talked about the studio's final days, with one adding the "mistake we made" was underestimating new IP difficulty.

They "messed up" Blur's launch with delays giving them a "less-favourable release date." Their new games became "the products of committees and analysts."

Liverpool may have lost Bizarre Creations but they've at least gained Hogrocket Games, made up of the former developers. Already they're busy on a project.

This new studio is supported by a "small team of contractors" which include two BAFTA winning animators. They seem to be after the digital market. 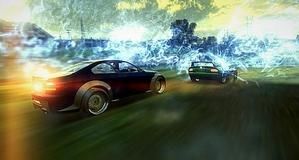