The open beta for Relic Entertainment's Company of Heroes 2 is officially open for business. It will launch a little later today and run until June 18th giving fans a two week competitive and co-op multiplayer taster.

Six of the RTS sequel's maps will be made available, with the first 45 levels of the game's progression and bulletin system. All unlocks earned will carry over if COH2 is purchased within 60 days.

Company of Heroes straight to DVD film out February 26th

While THQ may not be a company of anything anymore, the Company of Heroes movie they signed off on is fighting the good fight against those Atom bomb building Germans. It's going straight to disc.

The movie stars Tom Sizemore, Vinnie Jones, and Neal McDonough. The Company of Heroes IP is now owned by SEGA as they bought it and Relic Entertainment during the THQ auction.

Brian Farrell and Jason Rubin have discussed a little about the closing moments of publisher THQ, of which both were leading executives. Farrell does "sincerely regret this outcome" for those out of work.

Rubin adds that he was brought in to "help turn this ship around," and while disappointed never everyone was saved, he echoes Farrell in being grateful for those that were snapped up.

In honour and to "continue his contribution" to the industry, Company of Heroes developer Relic has begun the 'Brian Wood Memorial Game Internship'.

He was an "integral part" of Relic and helped "establish and sustain" Company of Heroes as 'AAA'. The internship begins February with 3 annual placements. 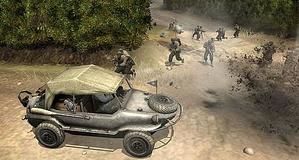