If there's one thing Game of Thrones doesn't have enough of, it's Centaurs. But with Crowfall offering up a discount to its current packages over the holidays, you can fight alongside some if you wish.

After raising over 10 million dollars Artcraft Entertainment are taking their ambitious 'throne war simulator' MMO Crowfall back into crowdfunding, but why?

Independent game developer ArtCraft Entertainment announced today they have amassed more than $3 million in crowdfunding to bring their flagship MMO title, Crowfall, to a total funding amount of $10 million.

Crowfall developers ArtCraft are planning to move to the next testing phase in upcoming MMO Crowfall. The 'Big World' Testing phase sets to raise the bar in what early adopters of the game have seen before in terms of the scope of the world.

ArtCraft Entertainment has kicked off the pre-Alpha phase of testing for its ambitious, crowd-funded MMO Crowfall. It centers on the game's PVP content, and it's the first time that backers have been able to dig into the game. 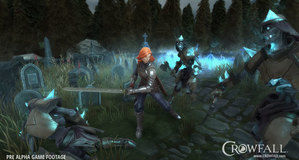