You've long yearned to see a proper conclusion to the tale of the Four Horsemen of the Apocalypse. Darksiders II wasn't the one to do it, but if these rumours hold true, Darksiders III should bring us close.

Darksiders II: Deathinitive Edition came out last year, bringing the action-adventure extra visual bells and whistles on modern consoles and PC. The reason why the second game was remastered first remains a mystery, but we’re at last getting the updated version of the original Darksiders this October.

Darksiders designer Joe Madureira recently claimed that the fantasy action series was not dead, and it seems like he was talking sense. IP owners Nordic Games have responded by confirming that they are working on reviving the franchise, though it might be a while before we see it return.

Darksiders designer Joe Madureira says the action fantasy series "is not dead", and that new IP owner Nordic Games is already planning the future of the franchise. 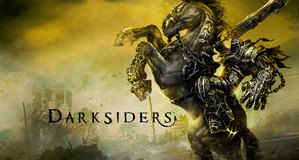