A Demolition Derby of Carmageddon proportions.

DiRT Showdown Is Your Latest Freebie Courtesy Of The Humble Store

Hopefully not a sign of a dire forthcoming, DiRT Showdown is free on the Humble Store for a limited time.

Codemasters' communications director Rich Eddie has oh-so-subtly posted up an image looking very Colin McRae with tomorrow's date on it. Super-psychics predict some kind of announcement is due.

DiRT Showdown was launched last year with Codemasters launching GRID 2 most recently. With nothing from E3, perhaps now we'll get something about the next DiRT.

Game of the Month - May 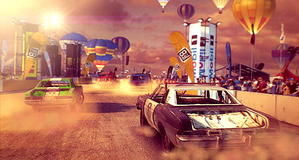