An image from origins unknown has appeared with Arkane Studios and Bethesda logos on it, with a rather prominent 'Dishonored II' as the headline with the caption "Witness the full reveal at E3 2014!"

It's also stamped #DarknessOfTyvia. Arkane has been very quiet on their next project, and it seems everyone's suspicion of a Dishonored sequel might just be true. Bethesda declared it a "new franchise".

Bethesda has officially announced the release date for the latest DLC for Dishonored, called "Brigmore Witches", which was hinted at earlier with screenshots. The DLC will conclude the Doud storyline from "The Knife of Dunwall". 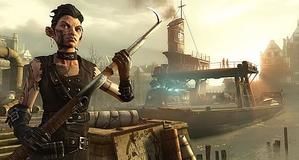