PlayStation Network US update announced for week of 1st May

This week's US PlayStation Network includes a discounted full game download of Battlefield: Bad Company 2, and also Awesomenauts, which may or may not be available thanks to the recent insolvency of publisher dtp Entertainment. Otherwise, players can check out the demo for DiRT Showdown.

Disney Interactive has announced that new DLC is available today for Disney Universe. The new downloadable content features the Disney Channel's popular show, Phineas and Ferb, including a Danville level as well as new costumes allowing players to dress up as Phineas, Ferb, Dr. Doofenshmirtz, Agent P and Candace.

Disney Universe gets the bear necessities with Jungle Book DLC

The costumes include the independent man-cub, Mowgli; the ferocious tiger, Shere Khan; the rowdy King Louie; the nurturing black panther, Bagheera and the adorable Baby Elephant. 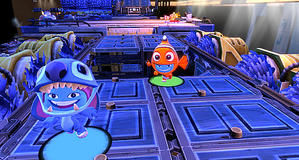