Elite Dangerous: Horizons Becomes Free for Owners of the Base Game Next Month

Players who've already purchased Elite Dangerous: Horizons will receive the exclusive Azure paint job that can be applied on all of the game's 41 ships.

Elite Dangerous: Horizons The Guardians Update - Everything you need to know

There are some fairly big changes coming to Frontier's Elite Dangerous in the new Guardians update.

We recently heard that Elite Dangerous wasn’t officially coming to Oculus, and that the developers ”chosen to focus on SteamVR.” But today, they’re singing a different tune!

Frontier Developers has announced that since the game's launch back in December 2014, the space sim Elite: Dangerous has sold 1.4 million units across all platforms, including PC, Mac and the Xbox One.

Elite Dangerous: Horizons has been in and out the news for some time now as Frontier Developments has prepared for its big 2016 push into expanding the space simulator game. Today we get the first portion of the Horizons in the form of the 'Planetary Landings' DLC and there's a trailer to celebrate the release. 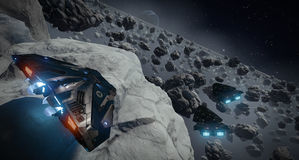