The sixth DLC pack for Fallen Enchantress: Legendary Heroes will drop this November, Stardock has confirmed. Titled Battlegrounds, it will add 15 new maps and over 20 new 'stamps' to add variety to the game's random map generator.

That's a lot of new worlds to conquer. The new content joins the free patch 1.8, which adds six new monsters to the game and tweaks the game's monster-spawning system.

Stardock have released the latest DLC for their turn-based fantasy strategy game Fallen Enchantress: Legendary Heroes. The Leader Pack will feature a new playable ruler for each of the game's 10 factions, with plenty of new options if you'd rather use the title's extensive customisation mode.

Stardock has announced that The Dead World DLC is now available for their 4X fantasy game Fallen Enchantress: Legendary Heroes. The DLC is available from Stardock directly or Steam for $4.99 USD.

Stardoc has announced the third premium downloadable content pack for Fallen Enchantress: Legendary Heroes, the Loot Pack DLC. The DLC adds 33 new items for the game that can be snapped up after battles. 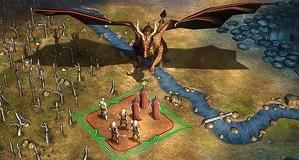