And now Telltale's watch has ended..

Despite Telltale being very happy with the critical and commercial response to both Game of Thrones and Borderlands, Season 2 of both are "on hold".

The finale of the first season of the Telltale Games adaptation of Game of Thrones, The Ice Dragon, will be released tomorrow. As such, the developer has released a launch trailer that focuses on the player choices made during the series.

The sixth episode, The Ice Dragon, takes place in part in the frozen wilds beyond The Wall, where Gared learns the secrets of the mysterious North Grove. Meanwhile, Mira deals with the political games by Cersei Lannister, who controls King's Landing.

What will be the final fate of the house of Forrester? The Telltale Games adaptation of Game of Thrones has been a thrilling rollercoaster ride through its first season and the developer has confirmed that the season conclusion will be coming on November 17th alongside screenshots.

As Telltale Games did with Tales From the Borderlands, the studio has accompanied the announcement of the release date for the final episode of their Game of Thrones series with the additional information that the first episode will be available for free. 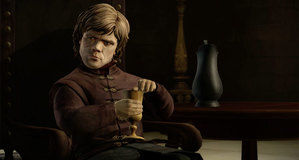